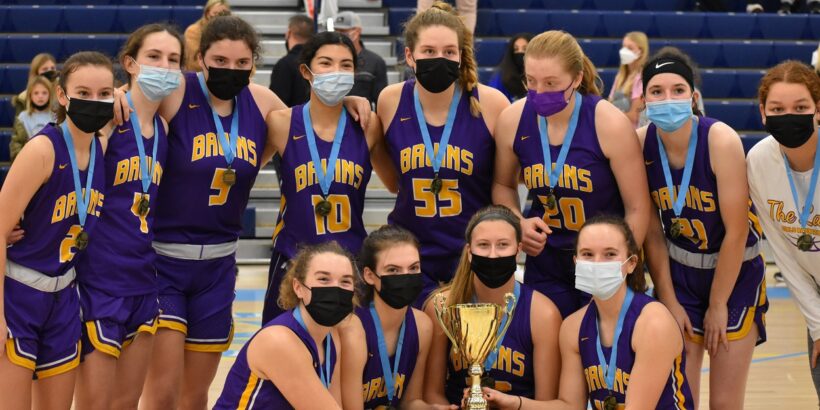 Host Lightridge wasn’t given much chance against #10 Lake Braddock in the final of the inaugural Boltball Holiday Invitational Thursday night, but the Lightning made it clear early they wouldn’t go quietly.

Still, Lake Braddock’s size, experience and skill was ultimately too much for them, as the Bruins prevailed to win, 47-21.

The Lightning played tough defense and moved the ball on offense well, only trailing 10-8 late in the first quarter. But then Braddock senior Riley Drumm drilled a three-pointer, and the Bruins’ defense tightened up. Smaller Lightridge just simply couldn’t get good looks at the basket, as Lake Braddock (8-2) held the hosts to just four points total in the entire second and third quarter combined.

Though buckets again started to fall for Lightridge late, the outcome was decided.

The balanced Bruins attack was led by senior Kiera Laskofski’s 12 points, sophomore Sarah Pritz’s 10 points, and Drumm’s nine. Pritz was named Boltball MVP, while Drumm was also named to the all-tournament team. The Bruins, who had only eight players available for the first two games of the tournament, had 11 players play Thursday night and eight score.

Chantilly (5-5) jumped to an 8-0 early lead against Justice and never looked back.

The Chargers, a last-minute substitution for John Champe in the tournament, were powered at Boltball by their freshmen. Forward Emerson Mustard scored 18 first-half points, doing damage from both the block and three-point line, and finished with 20 total. Guard Daniya Brown added 10 points, and was named to the all-tournament team.

The Rams found themselves in a tight game against a rapidly-improving Rock Ridge squad, but Riverside’s transition offense, defense, and skill eventually won the day.

Riverside (7-2) outscored the Phoenix 16-2 in the second quarter and responded in the second half with key baskets after Rock Ridge cut its lead to six. Kaylie Avvisato scored 22 points, hitting a pair of big three-pointers and often finding herself on the receiving end of long passes from fellow sophomore Ella Mahaffey (16 points) in transition.