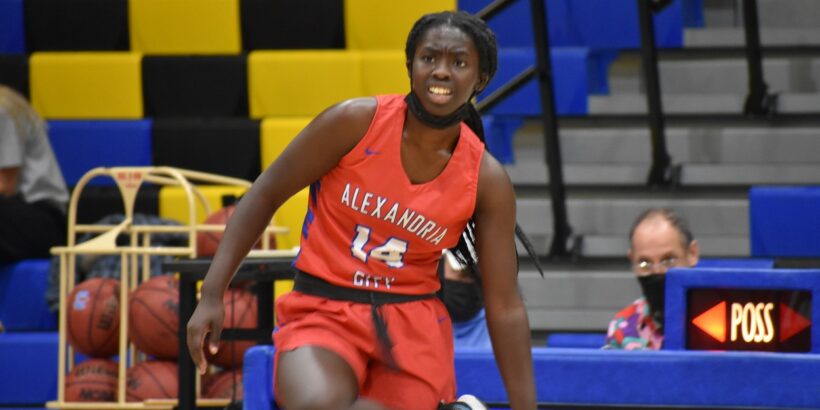 Editor’s Note: We will add Brentsville’s Alden Yergey to the first team. We had the talented junior listed as a senior mistakenly because of her commitment to Siena. Apologies!

FIRST TEAM
G. Amor Harris, Alexandria City
It seems Harris has been playing at AC, formerly TC, forever, because she played JV as an eighth grader at the school (ala Titans legend Tierra Ruffin-Pratt). If your coach has you guarding her without help, you’re in serious trouble. The tall guard is strong in the lane and to the hoop and if she gets in transition, it’s over. Her athleticism and quick hands are always a threat to get that transition going off the steal.

G. Grace Middleton, Tuscarora
Middleton averaged 19 points a game for a solid Tuscarora squad this season. Following in the footsteps of her two college basketball-playing sisters, Grace looks like she’s ready to join them right now. She does a lot of things on the court her sisters also did–thrive in transition, spark offense with her defense, etc. but we particularly love the way Grace shoots threes. She still manages to jump and release the ball quickly–it’s impressive.

G. Mary Prater, West Potomac
Hardly anyone has the shooting range of Prater in Northern Virginia. We love it when she brings the ball up court, the defense sags for some strange reason, and Prater drops a WNBA three from beyond the top of the key. She hit 14, count ’em, 14 three-pointers in two games versus Fairfax this year. She does a lot of other things well, especially handle the ball.

G. Toni McCrae, Edison
The National District co-Player of the Year burst on the scene this season for the Eagles with some impressive defensive and scoring performances. She is very quick with good handles when running the point, and her cross-over dribble is about as fast as can be. McCrae is a threat to attack the rim in a flash and she’s not afraid to shoot from beyond the arc, especially when it suits Edison’s tempo. If you’re careless putting the ball on the floor, she’ll take it from you.

F. Elizabeth Creed, Meridian
Creed can punish opposing teams in a lot of ways. The second team all-state selection can play the role of a traditional power forward against smaller teams and own the block, but what makes her special is her ability to operate as a small forward. From the wing Creed can hit the three-pointer and surprise opponents with a quick crossover and floater. If you’re a smaller guard don’t drive the lane right at her, or you will feel (and be) rejected. Gotta shoutout Meridian teammate Peyton Jones here, who could also easily be on these teams.

SECOND TEAM
G. Ryleigh Thurston, Centreville
Competence, security, stability–Thurston is a player you’d absolutely want on any team. The point guard just knows how to get it done and help her team find good looks. She’s a pinpoint passer, and capable of threading her way to the hoop through even pack line defenses. Thurston is also a very dangerous shooter from long range.

G. Sajol Thornhill, Broad Run
Thornhill came into her own in 2021-2022, teaming with Yvonne Lee to form one of the best backcourts in the area. She was able to explode through defenses to attack the rim seemingly at will. For a junior she seemed to us to be ridiculously clutch, constantly making a key three, or producing a key steal, or basically just getting it done.

G. Elyse Autrey, Fairfax
Perhaps no other player anywhere got as much defensive attention as Elyse Autrey did–we heard more than one opposing coach reiterate in the huddle to not let her score, no matter what. Autrey is very quick and explosive off the dribble and has added a lot of shooting range to her game, often off a next level-type jumper. Despite the absurd defensive attention and Fairfax only averaging around 30 points a game, she still somehow led the Patriot District in scoring.

G. Alana Powell, Osbourn Park
A lot of talent in Osbourn Park’s backcourt and Powell was a big part of it this season. She’s a strong, taller guard who can play the point or just as easily slide over to the 2 or 3. Powell can rebound well and has a multitude of moves that enable to her to get to the basket. The second team all-state selection is relentless, physical, and a good passer–one of our favorite players in Northern Virginia.

F. Caroline Shimp, Robinson
Shimp is an agile, strong forward who operated with efficiency this year from the high post and elbows, especially. A First Team All-Occoquan Region selection, Shimp commonly put up double-double-type games. Like fellow post Georgia Simonsen she can anchor your interior defense, providing deflections and blocks. Her solid footwork allows her to catch opponents flat-footed when she drives or when she sticks the outside shot.

THIRD TEAM
G-F. Kori Cole, Osbourn Park
Coach Chrissy Kelly calls Cole “the emotional leader” of the Yellow Jackets. The versatile Cole is a very good defender like most on her squad. She has physical strength and can occupy the block down low and get it done down there on offense with an array of post moves. She can also operate from the wing, firing threes and getting to the rim on drives with good extension.

G-F. Kara Bremser, McLean
A shooter with some height will always be in demand at the next level. Bremser is that and more. She has one of the prettiest shooting strokes in the region from long range, which she used in games versus Lewis and Wakefield to hit six three-pointers. Bremser is underrated in other aspects of the game, and delivered key defensive plays in crucial moments for the Highlanders this season.

G-F. Aani Akins, Edison
Speaking of defense, lets talk about Aani Akins. Although essentially a wing, she was able to anchor the Eagles defense down low against taller teams that managed to get through the Edison press. She’s a wonderful mixture of strength and quickness that can also do great work defending wings. Oh, she can score and rebound as well, such as when she went for 21 points, 15 boards in a comeback win over Mount Vernon.

F. Bella Bruce, Westfield
Maybe we watch too many highlights to determine these teams, but we loved what we saw out of Bruce’s this year. The wing can stick the jumper and produced several key three-pointers this year. Bruce also was strong defensively down low, protecting the paint by repeatedly rejecting guards foolish enough to attack her directly. Will be interesting to see her play an even bigger role next season.

F. Jessica Dornak, South Lakes
You could make a very credible argument Dornak is the best pure post player of the junior class, first team, second team, whatever. She has great height, strength, and footwork down low and is capable of dominating the lane. Dornak does the dirty work down low, producing double-double-type nights on the regular. What we really like is her ability to step up in the fourth quarter and score, though.

Lots of strong Honorable Mentions below. We probably should have put Herndon’s sensational Aylin Humpherys on to give such needed guard power to that third team. Woodgrove’s underrated Colette Baine belongs on the list, as probably does one of Oakton or Patriot’s top-notch junior classes. Sarah Link is a good bet to be all-senior next season as she takes on an even bigger role for the three-time state champs. Gwen Balca is a post prospect to watch at Park View. The list goes on–this stuff is hard, folks.