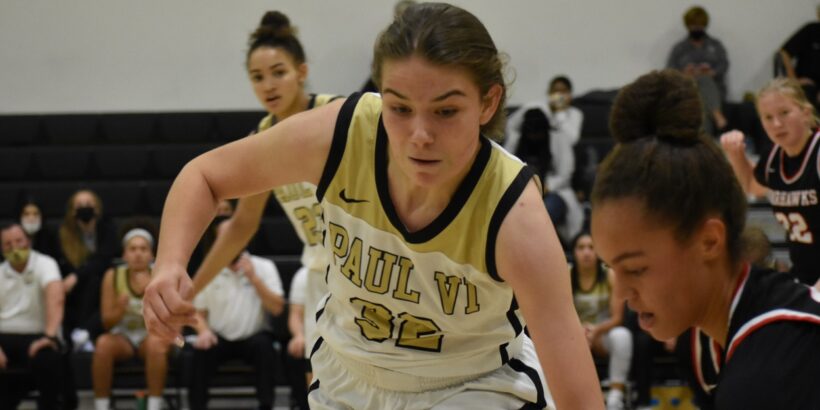 Paul VI junior Louis Volker is a forward who plays good defense inside and out and can finish--inside and out.
Share List

FIRST TEAM
F. Louis Volker, Paul VI
Volker is one of those players that does all the things the box score doesn’t show–though she still manages to fill in the stat sheet with double-double-type games. The First Team Division I VISAA selection is tough and physical. She can finish at the rim, operate from the high post, and bury the outside shot. She can defend wings and anchor the defense down low. She does it all.

F. Cai Smith, Virginia Academy
The tall wing continued to develop in 2021-2022. Always a solid player, her coordination and strength have improved, and that showed as Smith averaged in double figures on the season. She does many things well. Don’t sleep on the First Team Division III VISAA pick’s ability to run offense–she’s a fantastic, underrated passer.

G. Brooke Batchelor, Paul VI
Batchelor was a stabilizing force in the backcourt for the Panthers in 2021-2022, and was voted a second team all-state performer for her efforts. She’s a smart player that gets her hands and feet in the right spots on defense, and is also capable of setting up her team’s offense in quick order. Batchelor is a very good three-point shooter as well.

G. Joi Williams, Virginia Academy
A relentless scorer is the best way we know to categorize Williams. Like her teammate Smith, she knows how to get to the line, using her quickness and tight handle to get there. She can play the point guard or operate off-ball. The Division III VISAA Player of the Year is an excellent shooter and a pesky defender to boot.

G-F. Asia Boone, Paul VI
Is there an all-defensive team in the WCAC? Boone should probably be on it if so. She is the type of player who can just set the tone for a squad defensively with her strength, quickness, and high motor. Boone rebounds very well, too. Her frantic pace sometimes leads to rough shooting nights offensively, but the PVI wing can score inside and out when she gets going with the best of them.

SECOND TEAM
G. Mary Pennefather, Seton
Another prolific scorer is Mary Pennefather at Seton. Pennefather often runs the Conquistadors’ offense, but she loves to shoot from beyond the arc. Pennefather averaged about 15 points per game this season and did a good job getting looks for others when defenses keyed on her.

G. Nia Grymes, O’Connell
Grymes did what she always does this season for the Knights. First and foremost the guard flew around the court on defense creating havoc, getting steals and sometimes blocks. Best in transition, the ultra-quick guard can do a lot of damage in the halfcourt as well.

G. Nya Mason, St. Stephen’s & St. Agnes
A very underrated guard who can do a lot of things plays for the Saints. Mason averaged into double-figures on the year, ran some point guard, and played plus defense every time we saw her. She fills a lot of roles for her team and knows how to get to the rim.

G-F. Lyndsey Costigan, Flint Hill
Where would the Huskies be without Costigan, who can help a team in so many ways. A great passer, she’s capable of running an offense through the wing. A very crafty rebounder and defender who can also shoot, Costigan had some great all-around games this year for Jody Patrick’s team.

F. Sophia Carlisle, O’Connell
Defense and rebounding were Carlisle’s strengths in 2021-2022. The junior anchored the Knights defense, rejecting guards that drove the lane on her left and right. Has some moves too when she gets the ball on offense.