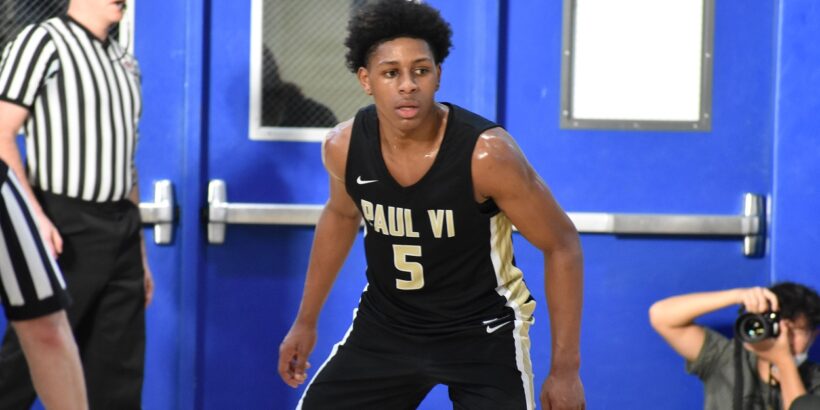 FIRST TEAM
G-F. DeShawn Harris-Smith, Paul VI
Harris broke out this season for the Panthers. He’s a good-sized, quick, strong, lefty guard who plays bigger than he is. To defend him you need some combination of a quick guard coupled with the strength of a post player–unless you by some miracle have one of those guys, it’s just easier to double him. The VISAA Division I Player of the Year, Harris-Smith is a warrior who does it all and has numerous DI offers.

G. Jamie Kaiser, Bishop Ireton
Kaiser is a walking bucket who led the WCAC in scoring this past season. He’s a physically strong shooting guard with great range beyond the arc and a high motor. We can see him flourishing at the next level with a physical, halfcourt team or an up-tempo team, alike. Wisconsin and Virginia Tech have offered.

G. Kris Mickens, Fairfax Christian
Mickens is a shooting guard with considerable leaping ability, and good lift on his jumper. He averaged in double figures for a deep Fairfax Christian team, also creating havoc all over the floor by blocking shots and creating turnovers. Expect Mickens to get his hands on the ball even more next season.

G. Khalil Williams, Potomac School
Maybe the most underrated guard around, Williams has a dizzying array of offensive moves for the Panthers. He’s got good length and handle to get to the rim, and he’s a very good long-range shooter. Already a First Team MAC selection, Williams can only get better.

F. Buom Jock, Episcopal
Jock, also a football standout, has intriguing potential on the hardwood. He is very athletic, and flashes promise as a shooter, finisher, and potential lockdown defender. Already all-IAC, he has a high ceiling and a chance to be a star next year as a more primary option in the Episcopal offense.

SECOND TEAM
F-C. Callum Crossman, Virginia Academy
The big man came from across the ocean (UK) and quickly turned heads with some flashy play. The 6’8″ Crossman is very mobile and athletic, and capable of using either hand on offense. With a full offseason and season here, he should break out next year. The buzz is real.

F. David Solomon, Virginia Academy
Solomon continues to do what he’s done since he started on varsity as a freshman at Lake Braddock–physically dominate. Now taller, somehow stronger, and wiser, he is still rejecting opponents and ripping down rebounds. Still can surprise opponents with his guard skills, too, especially in the open court.

F. Joseph Baldwin, Fairfax Christian
Baldwin came on strong in the second half of the season to earn VISAA and MPSC honors. The 6’6″ forward threw down his share of highlight dunks, and was a strong rim protector. His developing offensive game clicked up a couple notches by the end of the year, such as when he riddled Roanoke Christian for 25.

G. Jayson White, Christ Chapel
White had a great year for Christ Chapel, earning Second Team Division III all-VISAA honors. The guard can score in a number of ways, and he’s versatile enough to fill a variety of roles in small or big lineups. We’ll definitely have to watch Christ Chapel more next season.

G. Mason So, St. Stephen’s & St. Agnes
The backcourt of So and Connor Dubsky will really have a chance to break out statistically next year after several Saints losses to graduation. To say So has shake-and-bake is an understatement. He’s a got a great stop-and-go move that defenders simply can’t stay with him on the perimeter for long. The point guard recently picked up an offer from George Mason.