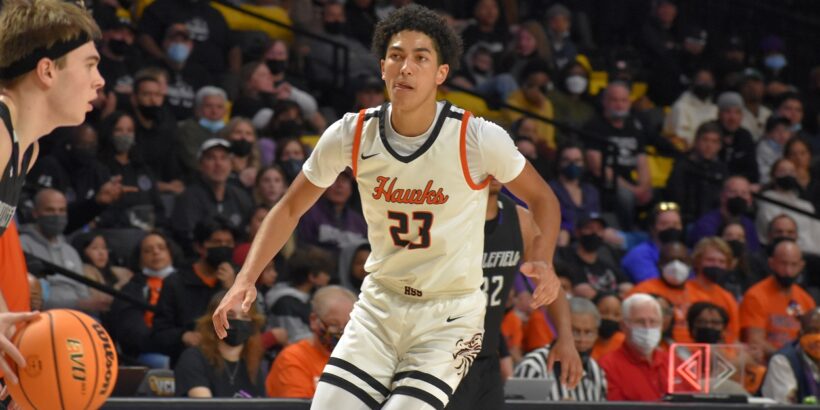 Hayfield's Greg Jones is an athletic wing who is a superior passer, defender, and can score inside and out.
Share List

FIRST TEAM
G-F. Greg Jones, Hayfield
Hayfield’s magical run has brought Division I attention to Jones, who definitely looks like a DI small forward to us. So versatile inside and on the perimeter, he’s a great passer and crafty defender. Credit to The Washington Post for selecting Jones First Team All-Met, he deserves it.

G-F. David King, Hayfield
Poll area coaches on their favorite player not on their team, and many will say King. The National District Player of the Year has a relentless motor, superb footwork and positioning, and regularly embarrasses bigger opponents down low. Capable of playing the perimeter as well.

G-F. Margad Choijilsuren, Fairfax
Considering the attention defenses gave him, Choijilsuren’s ability to still pour in points was all the more impressive. The 6’5″ Patriot District Player of the Year also is underrated defensively in tough, halfcourt games. Deadly shot from the arc and in.

G-F. Brian Weiser, Washington-Liberty
Weiser’s a good offensive player who can score inside and out, but what we really like about the 6’3″ wing is his defense. He racks up steals, and sometimes blocks, on bigger and smaller players alike. Named MVP of Arlington County by Sun Gazette.

G. Nasir Coleman, Patriot
The Cedar Run District Player of the Year will do just fine for our first team point guard. Like Weiser, Coleman racks up steals, and has an explosive second gear hardly anyone can match in transition. Content to dish and defer or, if necessary, take over games.

SECOND TEAM
G. James McIntyre, Washington-Liberty
McIntyre is as valuable as Weiser to the Generals, really. The talented guard sets the pace for W-L and is the team’s most consistent scorer. With a great stroke and an ability to draw contact and get to the line, McIntyre scored 35 this year in a win over Wakefield.

G. Wes Williams, Independence
Indy’s Williams teamed with Elijah Easter this season to comprise one of Northern Virginia’s best backcourts. Williams had some absurd shooting games from beyond the arc–eight of eight in one game–but also racked up assists by the bushel.

G. Doyle Brown, Centreville
Brown is an explosive guard who, when he gets it going, is as prolific a scorer as just about anybody around. He’s a ridiculously explosive athlete who scored 38 in a loss to Madison.

G-F. Eli Adegbenro, Potomac Falls
Potomac Falls won a lot of close games this year and a big reason was Adegbenro. He had multiple game-winning shots, but his tough defense and rebounding kept the Panthers in the game in the first place.

G-F. Jay Randall, Patriot
Randall is an athletic forward to keep a close eye on next year. Whether it’s blocks down low protecting the paint or steals outside defending the perimeter, Randall showed some A1 defense this season. Can shoot the three and score down low, and is a solid rebounder.

THIRD TEAM
G. DJ Holloway, Hayfield
We haven’t given Holloway near enough due–on a less loaded team he might average 25 a game. The combo guard can jump out of the gym, finishing with authority or rejecting opponents’ shots at the rim. He can handle, shoot, and is a crisp passer to boot.

G-F. Matthew Lenert, Marshall
We became Lenert fans when we saw him score 18 second half points in a win over Langley. He’s got good length and is a factor on the boards and forcing steals/turnovers. High efficiency shooter from downtown, to boot.

G-F. Maddux Tennant, Battlefield
We were just speaking of high efficiency shooters? Tennant is one of those from beyond the arc, maybe one of the best. The 6’3″ wing is also physically strong, which allows him to score at the rim. He’s a very good, underrated ball-handler as well.

G-F. Sam Whitehead, Stone Bridge
While the Bridge football dudes were still playing, Whitehead kept the basketball Bulldogs rolling. The 6’3″ wing had 29 points and 12 rebounds in a win over Rock Ridge, and get ready for similar-type dominance next season.

G-F. Paul Anderson, South County
The athletic SoCo wing does a little bit of everything, and that’s what we love about him. He plays extremely good defense, inside and out, and hits the boards. He’ll hit an occasional three and then if you guard him too close out at the arc, he’s at the rim in a flash.