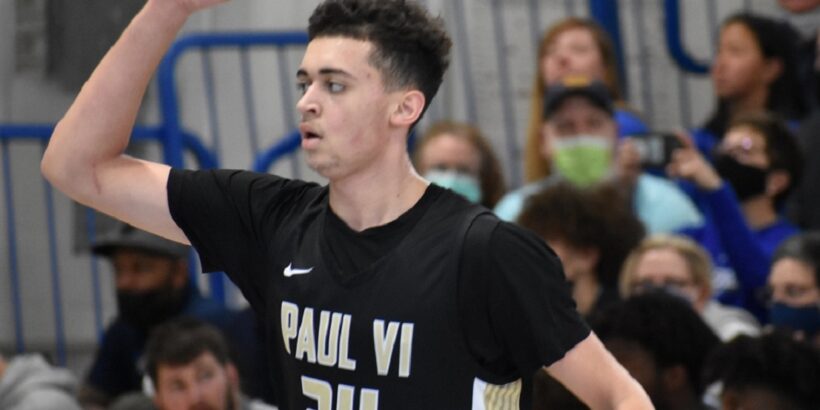 STARTERS
G-F. Darren Harris, Paul VI
In today’s game, everybody would love to have a Darren Harris–a very tall shooting guard who can rain threes down on the opposition. The Duke Blue Devils would love to have him, as they have extended a scholarship offer to the 6’6″ sophomore. Of course, he wouldn’t have that scholarship offer without his height and his status as one of the best shooters around, but what we love about Harris just as much is the head on his shoulders. Go watch him play, he’s as cerebral as they come.

F. Jadyn Harris, O’Connell
O’Connell has a heck of a sophomore class, which was a major factor in the Knights taking down some of the biggies in the WCAC this season. Harris had a great sophomore season, improving by leaps and bounds. He first grabbed our attention by registering 10 first half boards in a game versus Madison. Against bigger WCAC teams he still did good work rebounding, but he also demonstrated many other facets to his game as well. Slender but very strong and very athletic, Harris has the handle of a big guard and can score in a number of ways. Versatile, lock-down defender, too.

G. Del Jones, O’Connell
Harris scored 18, and Delmortay Jones scored 26 in a January win over Gonzaga. Jones is a 6’2″ guard that has a ton of shake and bake in his game. If you give him an inch he’ll take a mile, threading his way through multiple defenders to finish with creativity at the rim. He’s a good passer as well, and he isn’t afraid to hit the boards. Jones has a chance to become Northern Virginia’s premier playmaker as he gets older. Have to mention Machi Chester and Jacob Williams here too, when we said O’Connell’s sophomore class was loaded, we meant it.

G. Tey Barbour, Osbourn
Division I schools are starting to notice (George Mason offered this week) Tey Barbour, and they should. The 6’4″ guard is a fantastic basketball player. He’s a good shooter, making an astounding 21 of 25 three-point shots at a recent postseason skills challenge. He’s got good handles, which allows him to function as a big point guard if necessary. When opponents come out to stop him from beyond the arc, his athleticism allows him to quickly attack the rim with just a few quick dribbles. He does it all and indications are he’s a joy to coach.

G. Tavarres Riley, Freedom-Woodbridge
Thought about bringing Riley off the bench for scoring purposes on this team, but then we said: “How do we not start a guy that averaged around 24 points per game?” To be honest it seemed like Riley averaged more than 24 a game after coming over to Freedom from PVI. He scored 37 as Freedom beat Potomac for the first time since George Bush (junior) was president. He hit threes, but did most of his work getting to the rim, extending/exploding his body at the right time to score and/or draw contact. For his efforts, Riley was a first team all-region selection.

RESERVES
F. TJ Bethea, Potomac
Bethea is one of our favorite players in NOVA because he does a little bit of everything. The point forward has good size and strength for his age, and so hits the boards pretty well. He’s a tough defender who is willing to take charges and can guard smaller, quicker players as well as post players. Bethea is a very good passer and can power his way to the rim. He’s just learning to play wing off-ball; expect him to score well into double figures with another year of seasoning.

G. Kobe Davis, Wakefield
Wakefield didn’t have a ton of varsity experience returning this year, but the Warriors had a lot of young talent. Kobe Davis was a major part of that talent. The smooth sophomore guard had some huge scoring games (26 in a win over Marshall) and was selected First Team All-Liberty District for his efforts. Lots to like about Davis: his pretty shot, considerable range, and ability to quickly pick opponents’ pockets. We really like his footwork attacking the hoop as well.

F. Jamal Miles, South County
The small forward from SoCo populated the highlight reels in 2021-2022, showcasing his athleticism in the open court with several memorable dunks. Lanky and athletic and a constant threat to steal the ball from or reject opponents, Miles was often able to trigger fast breaks himself. In the halfcourt he was no slouch either. Miles has a very nice jump shot from beyond the arc and hit multiple three-pointers in numerous games.

G. Kye Robinson, Alexandria City
The Titans had a tumultous year but they were still a tough nut to crack in the top-notch Patriot District. Robinson was a big reason why. In his season opener Robinson drove the lane, made a move, and delivered a game-winner to give AC a last-second win. A star was born. The tough, over six-foot point guard went on to be named First Team Patriot District, delivering huge scoring games like 28 against Lake Braddock. Robinson is most dangerous when he gets into the lane, and he is always looking to receive a pass off-ball on a cut to the hoop. He’s also extremely difficult to get past when he’s locked in defensively on the perimeter.

G. Trey Terrell, Osbourn Park
Here’s another point guard that impressed a lot of people sophomore season. Terrell averaged well into double figures on the season, earning First Team Cedar Run District honors. Terrell can shoot from beyond the arc, but also displays great stop-and-go quickness which enables him to get past defenders and into the lane. Once he gets there he’ll look to score, but he’s also more than happy to deliver a crisp pass to cutters or shooters. Osbourn Park is likely to have a lot of success going forward with some great young talent, and Terrell has the look of a headliner.

F. Aiden Billings, South Lakes
Billings really came on toward the end of the season–at the end of it he was sometimes leading the senior-laden Seahawks in scoring. The young man is strong and relentless, very capable of bulling his way to the basket. While Billings sometimes gives up some height to taller posts, he makes up for it by using his body to seal opponents down low and on the boards. Billings has some guard handles, too. He’s an intriguing weapon for Mike Desmond’s team going forward.

G. Ben Hammond, Paul VI
When Darren Harris was lost for the season late with a wrist injury, Paul VI somehow barely missed a beat. That’s because Glenn Farello was able to turn to Hammond. The sub-six-foot guard delivered in a huge way with more playing time. A very good defender and ball-handler, Hammond also was able to contribute offensively–to say the least. He led PVI in scoring with 20 points in a big win over Gonzaga. In other playoff games he was able to feed the Panthers’ big offensive weapons, while still knocking down clutch shots as needed. Dug McDaniel will be a huge loss next year, but Hammond is a great guy to step right in and run the Panther attack.

G. Dezmond Hopkins, Patriot
Hopkins really came on strong late in the season for a loaded Patriot team that lost one game all year. The combo guard led the Pioneers in scoring for roughly the last ten games of the season, contributing around 15 points a game. The lefty is a smooth operator who has a very good stroke from beyond the arc and in. He’s content to work within the offense and with his talented teammates, but is in no way afraid to take the clutch shot when needed. We like his ability to rebound and box out against bigger players as well–that helps give Sherman Rivers the option of going with small lineups if need be. Hopkins is part of a great Patriot sophomore class that will help keep the Pioneers a contender.

G. Jayden Johnson, Loudoun Valley
How important was Johnson to the Vikings offense? Well, in the Dulles District Championship versus Loudoun County, the Vikings won a hard-nosed defensive game, 38-35. Johnson had 27 of those points despite Loudoun County being well aware of his ability to score. Score he definitely can. Johnson is especially adept at quickly shooting the three-pointer in rhythm, so he’s difficult to close out on. He can play the point, though the Vikings also have talented sophomore Landen Conrad to do that. That pair of Valley guards will be torturing Dulles foes the next two seasons.

G. James Delaney, Potomac Falls
Second Team Potomac District selection Delaney is the kind of guy that lights you up for six quick points in a one-on-one game before you even know what happened. He is a good three-point shooter, but can also stun athletic defenders with a pretty mid-range fall-away jumper. Delaney is a gamer. Like just about everybody on Potomac Falls the guard plays tough, hard-nosed defense, and he’s never afraid of the moment. He’s got pretty solid handles, too. Though he’s perfectly content to let the game come to him, it won’t be too long before he’s known throughout Northern Virginia.

All the guys we mentioned were all-district, and some of the Honorable Mentions were too. Gar-Field’s Chance Perkins hit about as many threes as anyone in Northern Virginia and is a legit Division I prospect in our minds. DK Moore and Samuel Norfleet down at Forest Park look like a dominant potential backcourt. Forward Benny Nketia was Second Team Dulles District. We love Elijah Flowers and Jahleel Jackson at Potomac School. The list goes on…