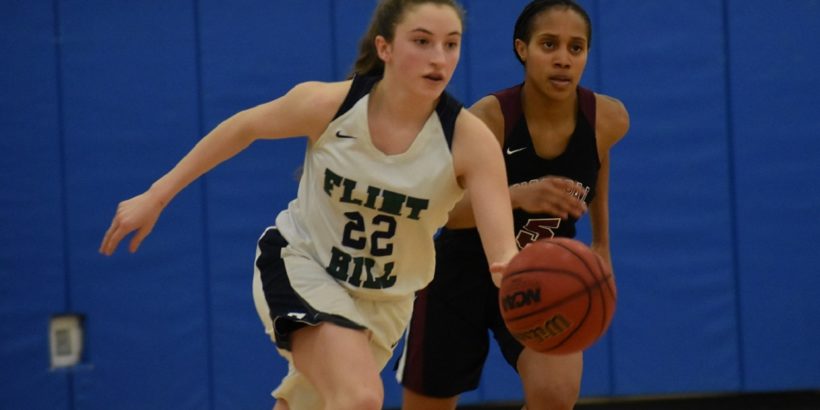 G. Caitlyn Shumadine, Flint Hill–A pure shooter like Shumadine would be a great fit in a starting lineup like this. When this one gets hot, she really gets hot. She averaged well over three three-pointers made per game, tops in the area, riddling Potomac School for 26 points early in the year and Sidwell for 29 late. While you have to account for her from deep first, she can also score inside the arc in a variety of ways and play the point if needed.

G. Marian Turnbull, Episcopal–A transplant from Pittsburgh, Turnbull performed very well in her first season as a starting point guard for the Maroon. “Pure” point guard is terminology that comes to mind when discussing her. She looks to set up her teammates first, keeping defenses off-balance with constant motion with and without the ball. She averaged four or five assists per game, but was also a scorer when her team needed her to be. She drained two clutch threes in the fourth quarter in a victory over Flint Hill, and led the Maroon in scoring in a win over Bullis.

F. Kayla Rolph, Potomac School–Potomac School doesn’t have the ridiculous program depth some of its private school rivals have, but it almost doesn’t matter when the Panthers have Rolph. She’s a six-foot-plus forward who can handle the rock, and she can be absolutely dominant. For example, at the Joe Cascio Tournament she had over 20 points and over 20 rebounds in a win over Falls Church. She’s a pretty solid shooter, can play point guard, and is an extremely fun player to watch for the Panthers.

F. Kennedy Clifton, Bishop Ireton–Another do-it-all tall forward is Kennedy Clifton of Ireton. Like Rolph a solid post defender, Clifton also excels as a defender on the perimeter. With her foot quickness and long arms, she’s a nightmare when she’s poking the ball away from opponents and getting into transition. Ireton’s young but very talented team sometimes struggled to find consistent offense in the WCAC, but Clifton emerged as perhaps the Cardinals most consistent offensive weapon even as a sophomore. She can take it strong to the hoop, or bury it from outside.

F. Jaelyn Talley, Paul VI–To say Talley does the dirty work down low for state champion Paul VI is an understatement. She’s not sized like a center, but can control a game down low like one, both on offense and defense. Strong and smart and also a good rebounder, she will clean up almost every loose ball with her expert positioning and quick hands. She scored in double figures more often than naught and her shooting from the arc and in continues to improve. Talley has the green light to take any open shot, so there’s real star potential here. Misleading statement–she probably already is one.

Not like you couldn’t “start” anyone else, either. If you wanted an even bigger starting five you could plug in Olivia Brooks of Bishop Ireton. Brooks had a big adjustment to make going from the Cardinal District to the WCAC, but she did just fine starting at center for Ireton. Tall at well over six-foot and strong, Brooks commonly flirted with double-doubles and was a big threat to do damage any time she received the ball in the post.

How about her teammate on the Cardinals, Lauren Mingo? Mingo is a forward comfortable with manning the high post next to Brooks on offense, as well as playing the wing. She’s got great quickness and anticipation on defense–Mingo is always a threat to intercept a pass. Plus like Clifton she can score in a variety of ways, inside and out.

Aaliyah Carlock of O’Connell will likely break out statistically next year. This season the 5’9″ guard was content to fill numerous roles on a very strong Knights team. She made her strongest impact as a very capable on-ball defender, but also contributed on offense with key buckets from all over. She’s adept at getting to the hoop and keeping the ball high while drawing contact. Quick enough to matchup with smaller guards and athletic and strong enough to take on bigger forwards, Carlock gives Aggie McCormick-Dix a lot of lineup flexibility going forward.

Reina Washington took her talents to John Paul the Great for her sophomore season and did just fine, leading the Wolves to a very solid season. She’s a combo guard with good ball-handling ability that can set up the offense and then do damage within the frame of it. Washington averaged in double figures, doing a good bit of her scoring from beyond the three-point line. On defense she’s one of those guards who is always looking to force a turnover by sneaking a hand where her opponents don’t expect it.

Sometimes lost in the team’s dominance is the scary sophomore class of Paul VI overall. Fiona Hastick and Alyssa Costigan are going to dominate alongside Talley by the time they’re seniors. Both are eventual Division I guard-forwards with solid size that can do a little of everything, playing on the wing and doing some rebounding down low. (Track Alison Kunzwiler as well)

Flint Hill also has a very strong sophomore class. Lynley Birchard and Kelli Giuliani (and Nicole Kladakis) made their marks playing a ton of minutes next to Shumadine. Giuliani is a guard with decent size who can play defense and has a pretty mid-range jump shot. Birchard is a physically strong guard who can fill it up from outside. Both can handle the point. The Huskies are going to be very good in two years, perhaps before that.