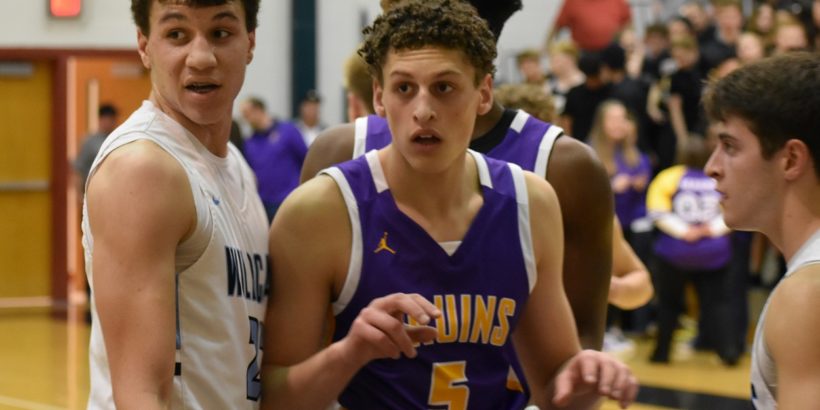 Like tall guards? Well, a bunch of them made their mark in 2019-2020, which isn’t an easy thing to do for freshmen on the guys side. It’s almost impossible for players to be physically strong enough at 14-15 to make their mark against 18-year olds, but these guys did. They better be strong, we need ’em to rebound as this team is almost five-out all the way…

Jamie Kaiser, Lake Braddock–What Kaiser did his freshman year in one of the toughest districts in NOVA was really remarkable. A tall guard (6’3″) capable of also banging a little bit down low, Kaiser went for double figures in his first varsity game and never looked back. He scored over 20 points numerous times against some good competition, doing it in a variety of ways. Ask Fairfax about that–in one game against the Rebels he hit six three-pointers. In another game against them he drew constant contact and went to the line 13 times. Who does that as a freshman, regardless of system? Take notice please, college scouts.

Deshawn Harris-Smith, Paul VI–The newest hot name on the block for PVI is Deshawn Harris-Smith. Another tall guard in the 6’4″-6’5″ range, Harris-Smith performed admirably when called upon, including in the Panthers’ legendary seven overtime victory in December (nine points). Playing in a lineup chock-full of DI-caliber guards, it says something that Harris-Smith often received significant playing time. The smooth lefty scored a decent amount, mostly at the rim, but really made his initial mark on defense with his length and anticipation. His quickness can really surprise smaller guards, too.

John Awoke, Annandale–Awoke generated a nice amount of buzz almost the second he stepped on the court at Annandale. The first team All-Gunston District selection regularly scored in double figures, and he was named tournament MVP at Joe Cascio in December. Another guard well over six-feet tall, Awoke made opponents look silly with his ability to change directions in tight areas and bury mid-to-long range jumpers. He’s a guy that can play point guard and get his own shot almost when he wants to. Love his ability to rebound as well–Awoke regularly delivered 5-8 or so per game. He’s a great fit with the young, talented, and well-coached Atoms.

Alex Bokman, Freedom-South Riding–Bokman is one of those guys that does one thing so well–shoot threes–that we’re almost positive the other aspects of his game will come as a surprise to some opponents that don’t scout very well. More on those things as they happen in the years to come. For now, lets just talk about what Bokman did best his freshman year, which was hitting big shots in every environment imaginable. Bokman made almost half of his attempts from three-point range on the year and averaged 16.5 ppg in two wins at Martinsburg over Christmas break. He is one to watch going forward.

Wesley Williams, Independence–Wesley Williams was as tough a freshman as there was anywhere in 2019-2020. He brought a different dynamic to the first-year Tigers when he was on the floor, helping them put pressure on the ball with aggressive, tough defense. And the kid can score, such as when he netted 24 against Tuscarora. Williams uses his long arms and smartly positions his body to attack the rim after he’s broken opponents down. He’s a very capable point guard right now–in three years we think he’s going to be way better. Which is bad news for Indy opponents.

Margad Choijilsuren, Fairfax–We better get used to spelling his name sooner than later. On a veteran team filled to the brim with experienced juniors and seniors, Choijilsuren earned his playing time in 2019-2020. We were taken aback with how well the guard played against some of Fairfax’s tough opponents. He scored 12 in Fairfax’s huge win over South County and 11 in a close win over Wakefield, coming off the bench both times to give his team a much-needed spark. Very aggressive defensively and taking it to the hoop, Choijilsuren also is a pretty solid shooter from beyond the arc. He’ll rack up some impressive numbers next year.

Jayden Ross, Osbourn Park–OP didn’t do very well in the Cedar Run this year, and sometimes its hard to notice any of the other Jackets much when the spectacular Ethan Wilson is dropping 30, but Jayden Ross quietly had a very nice freshman campaign in Manassas. Fast and long, the 1/2 guard can get down the court in a hurry, making teams pay in short order after a steal. Ross uses his legs well on his outside shot, and is a weapon from behind the arc. Already no stranger to double figures, don’t be terribly surprised if Ross averages 13-15 next year on an Osbourn Park squad with potential.

Khalil Williams, Potomac School–We heard a coach in the bleachers remark “that kid is going to be so good” during a Potomac School game. That statement is hard to argue. Pushing 6’5″, the tall guard functioned mainly as a three-point shooter on the wing in order to give Jamel Melvin space in the paint. He did that well as a starter for TPS, but also flashed a ton of other attributes that would lead us to believe Williams has star potential.

Mason So, O’Connell–O’Connell was a very young team last year. By season’s end the Knights’ sophomores were drawing kudos, but lost in that was the big role the freshmen played in the team’s gradual improvement. Mason So clearly was a huge part of that. A smaller guard, the first-year starter impressed with his ability to handle against some of the best guards in the DMV, never backing down. We love that he manages to get a lot of loose balls and a fair share of rebounds even against the huge kids in the WCAC, afterwards often igniting a fast break by himself. A very good free throw shooter, So should be able to draw a ton of contact and score a good bit in years to come.

David King, Hayfield–Love David King on this team. The Hayfield forward was another freshman who generally went under the radar, but he really impressed for the Hawks. He was a clean-up man for his team, grabbing offensive rebounds under the basket and converting misses into quick lay-ups. The block was essentially his, very rare for a freshman, and he showed an impressive array of old school post moves there. We were also impressed with his basketball IQ, as King was content to let the game come to him. By the end of the year King was seemingly always in there at crunch time, and he rewarded the Hawks with double-digit production when the games mattered most.