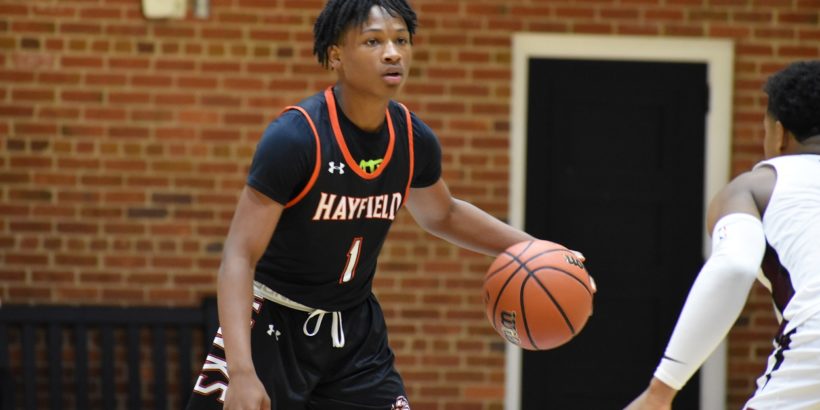 Hayfield's Braylon Wheeler is a dynamic point guard who can pull up in a flash to hit a big shot.
Share List

If this were an AAU team, we’d have to jettison one of these talented guards in favor of a Eren Ertan of Oakton, Liech Kong of Wakefield, or maybe a Kyle Henson of Herndon. Team could use more muscle inside and it has at least six point guards. But you can’t argue any of these young men don’t deserve their honor. Congrats to all on a great sophomore season!

Braylon Wheeler, Hayfield–Sometimes Wheeler makes it look like he’s already playing on the next level. The dynamic lefty point guard is a magnificent athlete who uses his speed/quickness to get his team in the open court and put pressure on opposing guards. He’s got a smooth jump shot from mid-and long range, and can pull up on a dime to get his shot before an opponent knows what hit him. That’s what he did to T.C. Williams in January, when he hit a game-winning jumper in the lane. A second team 6C all-region selection, Wheeler should continue to get better and better, and along the way we’ll try our best to not be reminded of Damon Stoudamire as he does.

Kyle Honore, Potomac–A second team Class 6 all-state selection, Honore is really everything you could possibly want from a sophomore point guard. Possibly the most complete player on this list, Honore can do it all. He handles the rock, is a fantastic passer and a good defender, can attack the rim and has good form from deep–he even rebounds pretty well for a guard. He’s one of those players we’d tell stuff if we were his coach, followed by a pause, and then a…”but you probably already knew that.” He probably did–to call him “heady” on the court would be an understatement.

Bradley Gagen, Independence–Gagen hit a ton of threes for Independence this year, averaging almost four a game. If its compare lefties to former NBA players day, lets go Chris Mullin here. With good height and ability to get his shot off the dribble, Gagen can simply take over a game, as he did when he poured in 26 against Park View. Unfortunately for the college basketball scouts that read our stuff, Gagen is already committed to the University of Tennessee for baseball. Hope he gives us an autograph someday when he makes The Show. Also, we would be remiss if we didn’t mention Independence’s strong sophomore class in general here–brother Jack, Bryce Dolby, Brian Courtney and a few others.

Gibraltar Coleman, West Springfield–The young Spartans got zero breaks this year in the brutal Patriot District, but Coleman made his mark as a second team all-district selection. A forward with good size and strength, Coleman can bang inside or bury threes from beyond the arc. He did his damage against the best–scoring 20 points or more in both his games against eventual co-state champion South County. If Coleman works hard it is hard to imagine he won’t dominate by the time he’s a senior. He averaged around 13-14 points per game this year–20 points per game and 10 rebounds a game is certainly not out of the realm of possibility eventually.

David Solomon, Lake Braddock–David Solomon had a very good follow-up campaign to his breakout freshman season. The forward averaged around 17 points per game in 2019-2020, getting to the line more and converting there at a better rate (70%) than he did last season. Solomon again thrived in the open court, constantly finishing his teammates’ misses and blocking opponents’ shots on the other end. He continues to develop guard skills, so at 6’5″ he remains an enticing next level prospect. Strong and smart, he is already a good weak side defender who has the potential to play lock down on-the-ball defense as well.

Elijah Easter, Freedom-South Riding–Freedom suffered a tough loss when senior Angelo Easter went down with a season-ending injury, but it must have made him happy to see little brother Elijah excel, and help mitigate his loss. To say Elijah burst onto the scene is an understatement. Easter is really, really fast, and it was quite something to see the second team 5C all-region selection go the length of the floor after a steal. Easter also has good lift on his jump shot, and he often made opponents pay with a quick mid-range one. Also a good defender, this kid is going to be a star the next two years at Freedom, if he isn’t already.

Dylan Hundertmark, Stone Bridge–Stone Bridge had a strong senior class this year and a good season overall, but anyone that watched the Bulldogs could tell you how important Hundertmark was to their success. We first noticed the lightning-quick Hundertmark at the Glory Days Tournament, where he flourished in the Bulldogs’ 96-92 upset of host Lake Braddock. He was almost impossible to stop in the open court. Some days he just made his mark playing defense and distributing the ball. Other days he took charge, such as when he led the team in scoring in a win over Briar Woods, or sank a last-second game-winner against Riverside. Hundertmark should break out statistically next season.

Michael Cooper, Woodbridge–Watch this one very closely in the years to come. He’s got a ways to go, but there’s the makings of a possible Division I guard here. Cooper is a lefty with good size whose athleticism allows him to finish at the rim like few players his age can. The 6’3″ guard was a first team all-Cardinal District selection and he was simply dominant at times. Want an example? How about when he scored 21 points all in the third quarter in a win down at Henrico Holiday Hoops? He can shoot from long range, and is a hard-worker and willing defender.

Mike Henderson, T.C. Williams–Another smaller point guard on our team, Henderson was one of those players who often totally swung momentum his team’s way when he came into the game. Quick as anyone in the region, the second team all-Gunston District selection could get the Titans going both on offense or defense. Putting the ball on the floor against him was a risky proposition–if he didn’t get a steal he was perfectly willing to take a charge. Henderson scored in bunches, too, averaging double figures in points for the year. It’s going to be fun watching him and Wheeler go up against each other for the next two seasons.

Darrel Johnson, Patriot–Providing much-needed muscle for this team is Darrel Johnson of Patriot. Here’s another kid whose contributions were sort of overlooked, as he played on a very strong team. Darrel, or “DJ,” excels in transition, but also impresses with a nifty array of old-school post moves. He can finish pretty well with either hand, which makes him extremely dangerous anywhere near the basket. By the end of the year Johnson showed what he’s liable to do more consistently next year–dominate. He was the only freshman or sophomore to be selected all-Cedar Run and celebrated with 20 points in a playoff win over Osbourn.

Bo Kuhblank, Madison–An unspectacular but crucial component of Madison’s surprise success this year was Bo Kuhblank. He can flat out play basketball. Really a combo guard, he’s a very good shooter who is content to camp on the wing and drain three after three if that’s what the defense allows. Or, Kuhblank is very capable of playing a traditional point guard role, handling the ball against pressure and distributing. The second team all-Concorde District selection is also a very solid defender, often sneaking a hand into traffic to come up with a key steal. Always hustling and versatile, he’s the kind of player that could find quality minutes on even the deepest teams.

Quincy Via, Lake Braddock–In any offense, especially Lake Braddock’s up-tempo one, it’s crucial to have a guard who can attack the lane. To that end, how much better did Via make the Bruins in 2019-2020? A guard with decent size and very good speed, Via was able to get into the lane constantly and dish to Braddock’s scores of shooters on the wing. If he didn’t do that, he would often just finish himself. Oh, and Via’s also not a bad shooter himself if you need him to play some shooting guard. Here would be a good place to mention Via’s fellow sophomore guard Trey Seigle by the way–he scored about as a many points as Via did in 2019-2020 and is deserving of recognition as well.

Max Lanham, Annandale–We like Lanham as a guard who can fulfill a variety of roles on this team. At over six-foot he can play a little three in a small lineup, plus he can spell you at the point. As he’s gotten stronger he’s become a better defender, improving his ability to apply on-the-ball pressure markedly. Lanham can score in a variety of ways–at the rim, from mid-range, and from beyond the arc. An Honorable Mention Gunston District selection, Lanham needs only to continue to doing what he’s doing to grab headlines in the years to come. He’s a smart young man and a breakout candidate next year who will only get stronger and better.