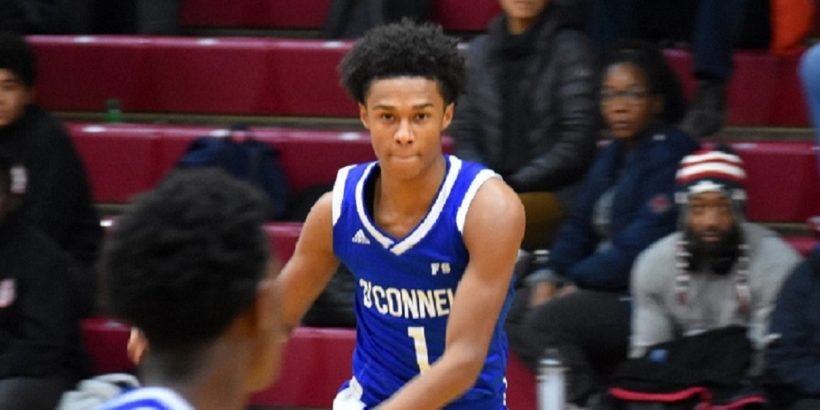 O'Connell's Lewis was good from day one on the varsity, but he really burst on the scene in January.
Share List

G. Paul Lewis, O’Connell–A second team all-WCAC selection, the little brother of Matt (O’Connell, JMU) established himself on the national scene with 28 points in the Knights’ upset of national power Mater Dei (CA) in January. Like his brother, he has great shooting range beyond the arc. The point guard is also dangerous defensively and can finish at the rim with either hand. It’s crazy how well Lewis did in the WCAC in his first season on varsity for the young Knights.

G. Knasir McDaniel, Paul VI–To no one’s surprise, in 2019-2020 “Dug” McDaniel continued to be one of the area’s most enjoyable guards to watch, regardless of class. He’s one of the most talented all-around guards in NOVA. Small but lightning-quick, McDaniel finishes acrobatically at the rim like few can. He can shoot, play great on-the-ball defense and is a fantastic passer. He’s already established as a major DI prospect and his statistics will only get better. A second team all-WCAC selection like Lewis.

G. Saxby Sunderland, Flint Hill–Saxby Sunderland is a smooth point guard with good height for the Huskies who just generally gets it done. He can fill it up in bunches, such as when he scored 17 points in the second half in a win over John Paul the Great. He does it both from the arc and in the lane, which he attacks almost effortlessly. A smart player and a guy with good leadership qualities even as a sophomore, you’re going to be hearing much more about him in the years to come.

G. Lou Hutchinson, Episcopal-Louis Hutchinson is another guy that will get more and more press as he gets older. A 2,3 who can also play point guard, Hutchinson has an advantage right off the bat being 6’6.” He’s got range, and few perimeter defenders are going to bother his shot from beyond the arc. Hutchinson transferred in from Maret this year and immediately made an impact, scoring nine first quarter points in the Maroon’s season opener. He also scored 18 with four three-pointers in a huge victory over Bullis late. Watch this one closely going forward.

F. David Onanina, O’Connell–Could Onanina be another under-the-radar Division I steal in the mold of SSSA’s Charles Thompson? Very possibly. Right now he’s a high-energy forward who can control the boards, and a guy who can clean up his teammates’ misses with a thundering put-back dunk. He’s flashed post moves against some huge players, like DeMatha’s seven-footer Hunter Dickinson. If his post moves and range continue to improve, look out. But even if they don’t, Onanina will still rack up double-doubles in one of the best high school leagues on the planet.

Nate Pabis of Flint Hill did a good job as a reserve guard this year for the Huskies. He’ll really get a chance to shine next year as a logical candidate to start with the departures of guards Ronald Ayers and Justice Ellison. Known as a shooter with a nice touch, Pabis demonstrated his scoring prowess in a win over St. James, where he netted 16.

Roland Martin is built like a running back and is in fact a running back for Potomac School. He’s also a starting guard for the Panthers’ basketball team. He’s tough, as you would expect, and doesn’t shy away from contact in the lane. The physically strong sophomore can also fill in it up from the arc if you sag on him too much–he hit five three-pointers in a win over Georgetown Day.

Talk about filling it up, the dynamic Bryce Hawkins moved from Edison to Veritas Collegiate and did just that. He’s an athletic guard who can score off the dribble and get to the line, which he did extremely effectively (32 points) in a win over Takoma Christian. He’s a good defender with his quick hands and feet as well–always a threat to pick the opposition’s pockets.

Zachary Bolgert of Fairfax Christian does it like a pro. The pick-and-pop forward is a good three-point shooter who makes it almost impossible for the opposing big man to sag on defense. Standing at least 6’6″ he also can do the dirty work inside, commonly giving his team 8-10 rebounds per game. By all accounts he’s getting physically stronger–as he develops he has the potential to fill a unique need for schools at the next level.

Seton has a triumvirate of talented sophomores in Jack Vander Woude, Bobby Vander Woude, and Andrew Nguyen. Nguyen gets the nod here, though you could say any of the three deserve to be on the team. Nguyen averaged over 16 a game for the Conquistadors in 2019-2020. Like most of the other guards on the team, he can shoot it. The sophomore was one of the area’s leaders in three-pointers made on the season.

There’s a lot of private schoolers just waiting behind superstars that are poised to make their mark soon. Some certainly have shown flashes, like Christian May of Paul VI or Ellicott Black of St. Stephen’s & St. Agnes.