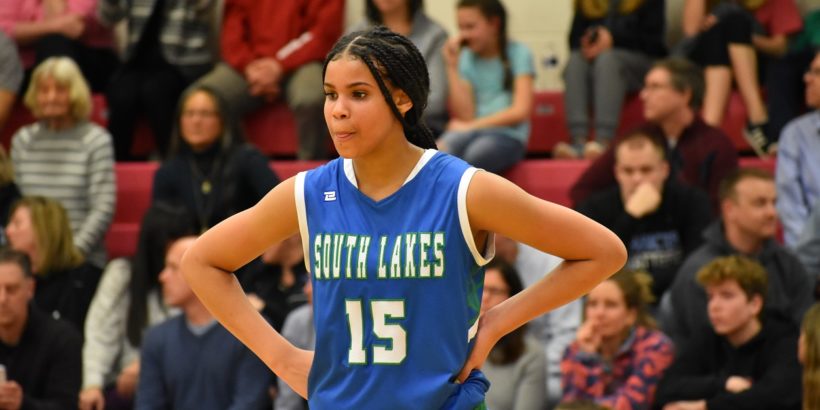 South Lakes' Brianna Scott is one of Northern Virginia's best prospects, a 20/10 threat night in and out.
Share List

How would you like to coach this squad? Absolutely ridiculous, take a look:

Brianna Scott, South Lakes– Scott had another monster year, owning the Liberty District inside while also providing a perimeter presence. Scott is death for opponents that haven’t seen her play, because the imposing forward can hit three-pointer after three-pointer if defenses sag on her. Not that opponents who have seen her play generally fare much better against her. She can dominate the interior on offense and defense as well, following teammates’ misses and blocking shot after shot. Scary part is she still seems to have a ton of upside.

Meghan O’Brien, Chantilly–Another 20/10-type performer is O’Brien of Chantilly. The Charger forward had some ridiculous games in 2019-2020, such as when she put up 30 points, 15 boards, nine blocks, six steals, and five assists in a win over Osbourn. The tall forward can fill so many roles on the block, in the high post, on the wing, or even as point forward against bigger defenders. With good foot speed for her size on defense, the Lehigh commit is the crown jewel of a fantastic Chantilly junior class.

Alyssa Andrews, Colgan–Nobody averaged more scoring per game than Andrews on this list. Athletic and strong, if you can keep her away from the rim–that’s good, but Andrews also has one of the best mid-range jumpers around. She’s good in transition and even playing small forward can impact games inside tremendously with blocks and on the glass. A player who averaged north of 20/10 and already a 1,000-point career scorer, Andrews could be the area’s most dominant player even as a junior.

Christina Trivisonno, Marshall–Trivisonno continued to pour it on for the Statesmen in 2019-2020, logging her 1,000th career point along the way. When she’s hot, she ridiculous, such as when she scored 20 points in the second half in a loss to South Lakes. She buries the three, but also takes perfect angles to the basket when the defense comes out to stop her. Her versatility, along with her twin sister Mary’s, is an extreme plus as well–both girls are comfortable as a point guard or playing off the ball. Good defenders too.

Lexi White, West Springfield–Speaking of versatile, there’s always Lexi White. White can handle the point guard (or forward) role, making bigger defenders suffer trying to check her on the perimeter. Put a smaller guard on her and she can post that poor girl up down low, finishing adeptly with either hand. With sophomore sensation McKenzie Matheny hobbled come playoff time, the Spartans were still able to go on a deep postseason run. That showed many people the unsung depth of West Springfield, but it also reinforced how ridiculously good White is.

Kara Vietmeyer, Oakton–Vietmeyer was a rock in the middle for Oakton this year. The strong and rugged forward-center was a first team All-Concorde selection, frequently producing double-doubles for Fred Priester’s team. She can do the necessary work down low, but she also has pretty good quickness attacking the rim from the perimeter and finishing with either hand. Oakton has other very good players and is expertly coached, but it’s hard to imagine the Cougars could have been nearly as successful without Vietmeyer this year.

Hannah Kaloi, Oakton–Especially since Kaloi missed a decent chunk of this year due to injury. Normally a shoo-in for this team, we thought about not including Kaloi on the team since she missed a lot of time. We couldn’t do it. She scored 22 in a Concorde Tournament win over Chantilly–over half of Oakton’s points–and poured in 31 in Oakton’s regional tourney loss to McLean. When she’s right she’s as versatile as any player around–able to guard wings and stick three-pointers while still asserting herself down low.

Juliana Park, Lake Braddock–Park has a lot of positive qualities she can provide to any team. A small forward who can fill a point forward role, she’s a good passer who can find her teammates when they cut to the hoop. A very good shooter from the arc, she’s also adept at the casual shot fake and attacking the rim. Strong and smart, the first team Patriot District pick is no stranger to double figures in rebounds. She also knows how to let the game come to her when she’s not running the offense.

Kennedy Fuller, Colgan–ACL injuries continue to be a scourge on women’s sports, but it’s always great to see players like Fuller rebound. The Sharks guard tore her ACL a couple years ago and came all the way back to have a major impact in 2019-2020. One of the best defenders in the region, Fuller uses her size, strength, and foot speed to make life miserable for whomever she guards. Fuller can score too. She averaged well into double figures on the season, doing most of her damage at the rim. She can also hit the trey, though–Fuller had three of them in a win over Potomac.

Ashley Allen, Potomac Falls–Allen was a first team Potomac District selection this year. The athletic forward’s bread and butter is attacking the rim–it takes a great deal of courage for a guard to take a charge from her because it could mean a knee to the face. She can run the floor, get up in the air and occasionally dominate games. Sometimes that’s with scoring but other times rebounding, like when she got 19 boards in a win over Briar Woods. She’ll occasionally hit from outside the arc, too. Some refinement is still probably needed, but it’s very possible Allen still has significant upside to her already formidable game.

Caitlin Blackman, Patriot–Blackman just improved on everything she already did well in 2019-2020. She’s a do-everything guard that leads the Pioneers in all facets of the game. She can score if needed, delivering 19 in her team’s regional loss to Colonial Forge, though she seems usually content to set up her teammates first and let the game come to her. A crafty defender, you have to watch it putting the ball on the floor anywhere near her. Plus, even though we’re pretty sure we said it last year, time to say it again–we love the fact that she grabs rebounds like a champ. Love it.

Jordan Campbell, Loudoun Valley–Well, if we love guards that rebound, how could we possibly leave Jordan Campbell off this list? This one pretty much averaged double figures in rebounds while sharing point guard duties for the one-loss Vikings. A very good athlete who plays multiple sports, Campbell is tough enough to go mix it up down low and still handle the ball against a premium guard on the perimeter. She does have an outside shot to boot. As her numbers are already sick, it will be interesting to see if they reach a ridiculous level next year as the team’s top returning scorer.

Megan Baxter, Chantilly–Always a good player, the hard-working Baxter clearly got even better this season. A point guard, Baxter got more aggressive as a scorer, taking more shots and averaging in double figures for the first time. She’s another guard who can rebound–Baxter got nine in an overtime regional loss to South Lakes–which we love. She’s a dangerous defender who uses her quick feet and hands to knock the ball away from the offense and go. Baxter is a good shooter from the arc–the first team All-Concorde selection can up her game even more if she becomes a lights-out one from deep.

Mackenzie Koch, Herndon–We thought Koch was underrated, but then we saw she was first team Liberty District and co-defensive Player of the Year, so guess not. Glad to see her get recognition because she deserves it. Koch is a guard/small forward who simply does all the little things any team needs in order to win. Oh, and she does some pretty big things as well, like sink the game-winning three-pointer as time expires to beat Lake Braddock. Her main selling points are great anticipation on defense and range way beyond the arc. We’re sold.

Kendall Jones, McLean–If you want a player that can fill it up in short order, check out Kendall Jones. Jones was good this year, averaging nine points and eight boards per game. With Elizabeth Dufrane gone next year, the forward’s stats are likely to jump sharply. We watched her score 11 points in the first half of two games this year against top competition with good front lines, and see no reason why she can’t be an 18/12 producer next season. Big and strong inside, she can hurt you first and foremost near the basket. But, Jones is also developing a shooter’s touch from deep. If there’s consistency developed with that shot, look out. Like Fuller, another player that battled back from a torn ACL.

We consistently want to add players to this team as many more deserve recognition. Two teams that get rooked here are West Potomac and Osbourn Park. Both (very good) squads have athletes (Raflo, Scarborough, Eby, Mackey, etc.) you could put on this team easily. Elayna Whitley of Loudoun County just got a Division I offer, and we know of others being looked at. There’s some serious talent here!