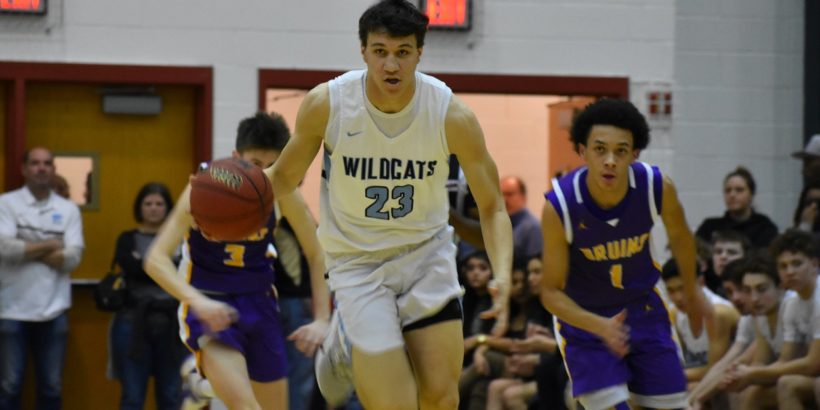 Avery Ford, Centreville–Ford, who also excels at football, was everything the Wildcats could hope for on the hardwood after transferring in from Paul VI. The forward really impacts the game on the defensive end, playing A1 defense both in the post and on the perimeter. He rebounds (20 against Western Branch at states), and is capable of pushing the ball himself up the court after he does. In addition, he is a good scorer around the rim and from the foul line. A team player first, Ford had some huge scoring games in 2019-2020 and could probably average 20 a game if he wanted to.

Tyrell Harris, Potomac–The tall and athletic forward was the Player of the Year in the Cardinal District for good reason. Definitely another team-first guy, Harris still did a ton of damage when the Panthers were able to get him the ball. In the half court his mid-range jump shot was difficult to defend. In the open court and with room to operate his long-strides were nearly impossible to defend. Harris had some absolutely monster games on the glass as well. He can be relentless, and he’s only going to get stronger and more athletic.

Trenton Picott, South County–As if this team needed another Division I-sized small forward who can run the floor and finish at the rim, here’s Trenton Picott. Picott averaged around 16 and 9 for the Stallions this year. He did plenty of damage in the half court, but was plain frightening when he would rebound and spark transition in the open court himself. Capable of playing solid perimeter defense against a guard but also blocking shots against post players inside, Picott can be categorized as a dominant, versatile asset for SoCo.

Andre Speight, South County–Another versatile Stallion weapon is Andre Speight. Speight is a very good-sized guard who can play the point. He is also comfortable sliding over to shooting guard, where he can do even more damage shooting from beyond the arc. Speight averaged just a little south of 20 a game in no small part because he’s a good shooter. He also has some nifty moves attacking the rim. A first team Class 6 all-state selection like Ford and Harris, Speight is also physically strong for his position and a good defender and rebounder.

Jalen Jasper, John Champe–Jalen Jasper and his brother James made a huge impact for the Knights this season after transferring in. Jalen, like his brother a small guard, really has to be considered one of the more difficult players in the area to guard. We’re not sure how many times we watched him floating around way beyond the arc this year, only to in the blink of an eye explode to the rim before the defense knew what hit it. Even zone defenses couldn’t keep him from the rim on many occasions. He’s also a good shooter, ball-handler, and pesky defender. James Jasper easily could have been on this team as well.

Steven Lincoln, Yorktown–On a team chock-full of good players, Lincoln still managed to stand out a bit. A strong and tall forward, he still displayed quite a bit of guard in his game. First, the lefty displayed very good range, with multiple made three-pointers the norm in most games. Second, he showed great athleticism in applying pressure defense–his quick feet and hands helping to produce steal after steal. While he did many other things well, above all Lincoln displayed a constant high motor, a must in Coach Joe Reed’s up-tempo system. Look for even better stats next year from Lincoln and the rest of the very talented Patriots junior class.

Greg Spurlock, Rock Ridge–Low-major Division I schools (or up) might do themselves a serious favor checking out guard Greg Spurlock. The first team all-regional selection is a 6’4″ swingman who plays the point. Silky-smooth with a very solid mid-range jumper, Spurlock knows how to create his own shot. He uses his long arms to great effect, finishing at the rim and poking the ball away from smaller defenders. Athletic but court-savvy, he has a good idea of how to set the pace for the Phoenix. Spurlock has a fairly reliable three-pointer to boot and is one of NOVA’s criminally under-appreciated players.

Jack Taylor, Marshall–Taylor is another next-level prospect some Division I teams need to consider, like yesterday. His drives and one-handed punctuation jams are all over the internet–our basketball-centric internet, at least. Taylor simply fills up the stat sheets. He had games of 40 points and 37 points this season. Extremely athletic, he does a lot of his damage at the rim, but he’s also got solid range and is good for a few treys a game. Tall like Spurlock at around 6’4″, he is simply a swingman most defenders simply can’t handle at this level. Definitely one to watch next year.

Nate Arrington, Hylton–Hylton, like much of the Cardinal District, is getting stronger and stronger. In the Bulldogs’ case, a strong junior class led by Courtenay Houston and Arrington is a major reason. Arrington brings much-needed post presence to this team. He’ll get you in the low post, but is one of the best in the region at making teams pay when he gets the ball high post as well. The lanky 6’6″ Arrington scored 17 a game mostly at the rim from those two areas, but he remains an intriguing next-level prospect on the wing as well. He has handles, can run the floor, and occasionally will stick a three-pointer.

Ta’zir Smith, Colgan–Colgan continues to progress as a basketball program, and a big reason for continued optimism is Ta’zir Smith. The guard averaged 15 a game this year and that was with him running the point for much of the game. On offense he can be devastating. He scored 28 in the Sharks’ first-ever victory over Potomac in January, going 15-of-16 from the free throw line. He’s very athletic and can attack the lane with a quick burst, leaving the opposition with no choice but to foul. He can also hit from beyond the arc, such as when he hit five threes in a loss to Brooke Point.

Max Jannes, Heritage–The shooting guard, a mainstay on our All-NOVA teams the last three years, just keeps getting it done south of the Dulles Toll Road. He got better in 2019-2020, averaging north of 20 points per game. Teams game plan to stop him, but it just keeps getting harder and harder. He hit for a career-high 32 points in January, then went for 39 a few weeks later. He’s known as a scorer and a shooter, but the 6’3″ guard does a number of other things well, to include play defense and rebound. He’s a fantastic all-around, multi-sport athlete.

Lukai Hatcher, Wakefield–Speaking of multi-sport athlete, have you seen Lukai Hatcher play? Almost impossible to not like this guard who can absolutely dominate a game, especially on defense. A lanky guard taller than six-foot, he’s just a fantastic athlete. His quick foot speed enables him to frustrate opponents with constant ball pressure, and his leaping ability allows him to control the boards like few guards can. The National District Defensive Player of the Year, he even blocks a decent amount of shots in the lane. He can score as well, averaging well into double figures this season.

Logan Spafford, Madison–Spafford would be invaluable on this team as a stretch four or a big 2/3. The first team all-Concorde selection is a very good shooter first and foremost, able to calmly knock down threes if the defense sags even a little. On defense Spafford displays good anticipation playing defense both up top and defending the post–he’s one of those guys that always seems to get 3-5 steals or deflections a game. With good footwork, positioning, and physical strength, he’s a guy who will also deliver rebounds as needed.

Matthew Lauture, South Lakes–You could see Lauture was ready to break out way back in the Wakefield Fall League, and break out he did. The all-Liberty District selection checks all the boxes. He’s got great size/height for a shooting guard. He can rebound. He gets low when he dribbles despite his height and can push the rock. He plays good anticipatory defense. He can finish at the rim, hit the mid-range shot, and bury threes. Next year on what figures to be still a good South Lakes team even minus Dagbe, Kurtu, etc. Lauture is likely to put up some sick statistics. He’s an intriguing all-around prospect in college.

KC Clark, Forest Park–On a Bruins team that made some noise this year, Clark was a key component. The six-foot guard announced himself in a big way with 32 points and 10 rebounds in a win over Veritas Collegiate in December, and kept his solid play going through district play. Clark is a good shooter who can punish defenses from beyond the arc. He’s also very capable of getting in lane, and if not scoring, distributing. He’s an underrated passer. All he needs to get due recognition as a star is slightly more consistency–we expect him to achieve that in 2020-2021.

Lots of debate here with the kids we selected, as usual. You could of course make the case for Anthony Jackson of Potomac or Shane Feden of Woodbridge from the Cardinal making the team. Joe Pesansky of Woodson, Jiaan Sehhat of Langley, and Liam Andersen of Yorktown as well. Manny Ojo of Osbourn didn’t make it, but you could make a case he could start for this team. What about Trey Nelson of Patriot? Lots of gems in Honorable Mention, as usual.