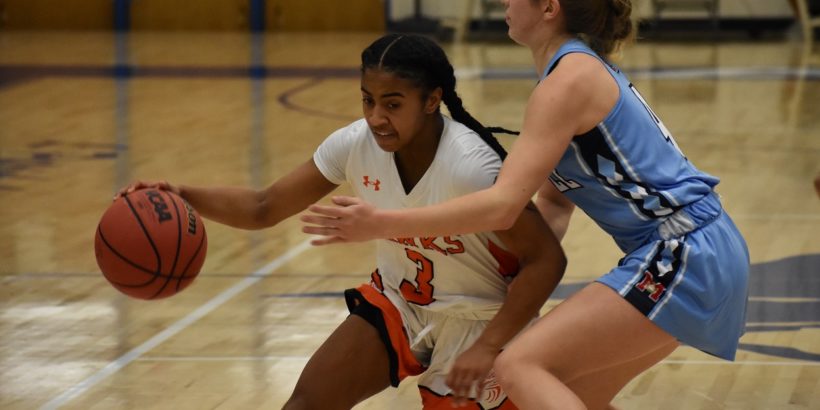 Our 2019-2020 public school sophomore squad is loaded in both the backcourt and frontcourt. Take a look:

Kendall Dunham, Hayfield–Whoa. We weren’t entirely prepared for Dunham, a guard who really came into her own in 2019-2020. Don’t get us wrong, we knew she was good and knew Hayfield had a great Class of 2022, but Dunham started to absolutely dominate games in December. She outscored Marshall by herself in the first half of a Rebel Roundball game, and in January scored 33 points in another contest. She has great handles, a beautiful jump shot with a quick release, and plays fast. The Hawks have a great future with her and her classmates in the fold.

N’Jya Hopkins, T.C. Williams–The exciting and talented Hopkins had a nice follow-up campaign to her successful freshman year. The guard is smart and a hard-worker, and that shows on the court. She consistently scores in double-figures, showing an amazing ability to make opponents pay for even giving her a sliver of an opening to the hoop. The other shooters on the Titans loved playing with her this year, because she’s one of those guards that can take the entire defense with her as she drives and dishes back to the perimeter.

McKenzie Matheny, West Springfield–You find a lot of solid freshman and sophomore guards making an impact on varsity, but you don’t often find a public school post player as young as Matheny that can dominate. Dominate is what she did with an impressive array of post moves down low. Even hobbled from injury in the playoffs against Madison she scored 13–when she was healthy she did things like score 27 against SoCo in the district championship. Can’t typecast her as a post, either, she’s very capable of handling the ball in the open court.

Grace Arnolie, Madison–The juggernaut Warhawks have talented guards and tough post players, and Arnolie fits perfectly in the starting lineup between them. She has a great jump shot and can also get tough points inside against taller defenders. She’s a go-to scorer and has been the minute she stepped on the court as a varsity player. Doesn’t always need to score on the talented Warhawks roster but could average 20 a game no sweat if her team needed her to. Athletic and smart, Arnolie also is a willing and very able defender.

Ashley Steadman, Woodgrove–Like Arnolie, the Wolverines’ Steadman is a team player who had the benefit of playing with good depth on her team sophomore year. So, she didn’t always need to dominate–but she was able to often do so when necessary. Steadman has good size and is dangerous everywhere, but especially as a stretch four and five. She has great range from the elbows and beyond and developed as a passer this season, finding her talented teammates open when defenses keyed on her.

Angel Jones, Forest Park–Go watch Angel Jones play sometime when you get a chance. Forest Park made some nice strides this year and couldn’t have done so without Jones’ dynamic play at the point. If the Bruins had the lead late, it meant the defense had to go out and cover Jones, which was essentially a death sentence. Just too quick to check for most, Jones also can change direction on a dime and attack the rim in an instant with a floater. Also a good passer and defender, Jones’ leaping ability supplemented her team on the glass as well.

Amani Melendez, Woodbridge–Woodbridge lost a lot of talent from its state championship team, but hit its stride in January due in no small part to Melendez asserting her ability more and more. The combo guard is most dangerous in the open court and is a superb finisher for her age. You have to pack in a defense against her but trouble is, she’s also a great defender. Her hands are always in the passing lanes, so she’s constantly getting herself in the open court. With her range improving on offense, there’s star potential here.

Cai Smith, Brentsville District–The All-3B Regional selection, Smith, had a successful follow-up season to her solid freshman campaign. A tall forward, she strikes first on defense, racking up blocks and steals by the bushel. What then surprises first-time opponents is her ability to run the floor and handle the rock after she forces the turnover. Still mostly a post, Smith projects eventually as a small forward at the next level if her shooting and range continue to improve. The talented Smith is one to keep a close eye on.

Alayna Arnolie, Madison–It’s wrong to typecast either of the Arnolies, who really do everything well, but Grace’s sister Alayna is especially known around NOVA for her defense. She can really make life difficult for opponents with her quick feet, hands, and all-around athletic ability. Don’t sleep on her offense either–Alayna started to hit double figures more often in 2019-2020 and she sports a dangerous jump shot very similar to her sister.

Yvonne Lee, Broad Run–What an absolute pain in the butt it must be to play defense against Spartans guard Yvonne Lee–even in a zone. There’s no rest against her when she has the ball. The small but talented guard constantly attacks, keeping most defenses on their heels. And then if she can’t penetrate, she can also bury a WNBA-range three-pointer in your face anyway. While she does need to improve her scoring efficiency, Lee is also an very tough defender and one of NOVA’s better-kept secrets. Not for much longer, though.

Elena Bertrand, Patriot–The only underclassman to make first team all-Cedar Run, Bertrand made her mark in 2019-2020. A guard who regularly scored in double figures, Bertrand also helped anchor the formidable Pioneer defense. She’s not a big guard, but she’s got some good length and reach which she uses to poke the ball away from opponents. She’s got great handle and can shoot, and figures to increase her offensive production even more in the years to come. Not yet physically strong though athletic, we were blown away all year by the toughness she displayed hanging just fine with some of the region’s better senior guards.

Zoraida Icabalceta, George Mason–George Mason has a lot of underrated talent, but the Mustangs almost certainly couldn’t have won Class 3 regionals without Icabalceta. Perhaps the most pure point guard on this list, she is adept at setting up the Mustangs offense and seems intent on making her teammates look good first. That hardly means the tall guard doesn’t score, however, as she can shoot from deep and attack the rim when the opportunity presents itself. Ask William Monroe (19 points) or Skyline (23 points) about that.

Jane Elkins, Annandale–Annandale has not been successful the past two years, as the Atoms haven’t had much depth and backcourt experience. But, Annandale does have one of the area’s best young frontcourts with freshman Haley Garrish and Elkins. Elkins has played a little point forward to help out her young teammates, and the skilled six-footer can do it. Ideally she is suited for a stretch four or five role, because she has very good range and shooting ability, but Elkins is happy to do whatever is necessary to help her team. She isn’t afraid to bang down low, either.

Congrats to all our Honorable Mention selections as well. You could slip an Eunice Yoon, AB Holsinger, or Isabela Gonzales right into the starting lineup and not miss a beat. Or, what about Madison’s Kiera Kohler, a forward who is a legitimate DI prospect? Mia Fitzgerald and Jailyn Alston in the Liberty District look like future stars, and…we could go on all day, but congrats to all!