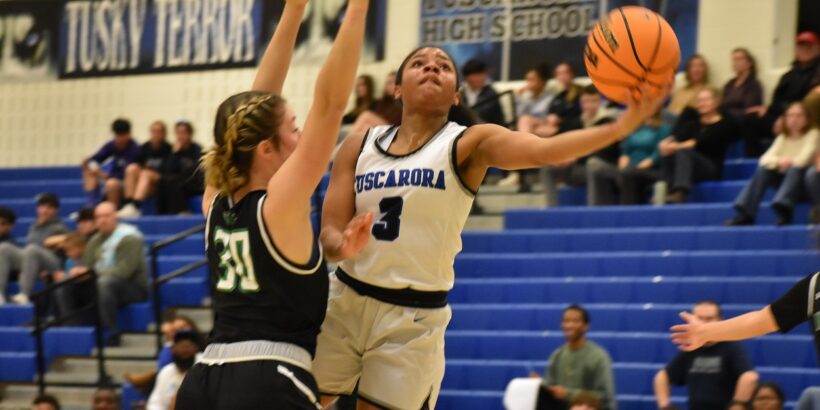 Wednesday night against Woodgrove, the Tuscarora girls basketball team were led by senior guard Grace Middleton and junior forward Alysa Carrigan, who both posted double-doubles to help earn their team a 71-59 win.

Tuscarora head coach Tayler Dodson praised her team for their commitment to the gameplan and success in transition.

“I think transition is the best part of our game,” Coach Dodson said. “Grace Middleton is obviously huge, and Alysa Carrigan running with her – that’s hard to guard for anybody. Everybody did a good job of taking care of the ball, getting it up the court, and looking for that one more pass to finish. I think we did a good job sticking to our gameplan.”

Middleton led the Huskies with 25 points, 11 rebounds, and 6 assists. Carrigan wasn’t far behind with 16 points and 12 rebounds, and senior forward Lillian Scheivert also contributed 13 points and 8 rebounds. Middleton credits the team’s success to the relationships they have outside of basketball.

“We have chemistry on and off the court,” Middleton said. “I think we’re really close off the court, so when we get on the court – we play like it.”

The Wolverines got off to an early 10-5 lead in the first quarter and would eventually lead 23-16 at the end of the quarter. The Huskies responded with a 10-3 run to start the second quarter that tied the game at 26. The host Huskies eventually took command as they ended the half on a 5-0 run, entering the third quarter with a 34-29 lead.

“We’ve been preaching–once you get there, you gotta keep pushing,” Coach Dodson said. “It’s a game of runs, they’re going to make a run, it’s how you respond to it. And I thought they did a phenomenal job of responding to every run (Woodgrove) made.”

Middleton also emphasized the adversity of the game, and was proud of her team for keeping their composure.

“Basketball is a game of runs,” Middleton said. “We had to stick together and we all did our part to come out with the victory.”

Tuscarora (11-2) gained more separation as the Huskies started the third quarter on a 6-0 run. However, Woodgrove head coach Derek Fisher pressed his team to ‘play fast’ and they responded with a 10-0 run to retake the lead at 41-40, with three minutes remaining in the quarter.

Despite the Wolverine’s constant pressure from their zones, Tuscarora remained calm and shifted the momentum back in their favor by ending the quarter on a 13-2 run. Coach Dodson said that during halftime she encouraged her team to play like its 0-0.

“You can’t let up, stick to the gameplan and continue to do what’s working,” Coach Dodson said. “We’ve been preaching since winter break: Keep pushing. [Woodgrove] is dangerous, they hit three after three and they hit six of those, all of a sudden you’re down five.”

Woodgrove again shortened Tuscarora’s lead to 60-54 with three minutes remaining in the game. But the Huskies kept their composure, and continued to break the Wolverines zones, which forced them to send Tuscarora to the foul line.

The Huskies helped clinch the victory by converting 9 of their 12 free throws in crunchtime, and holding Woodgrove to just three points in the final three minutes of the game.

“When we buy into our defensive gameplan, we’re pretty good,” Coach Dodson said. “I think we got away from that in some of our losses, so it felt good tonight to see them buy in.”