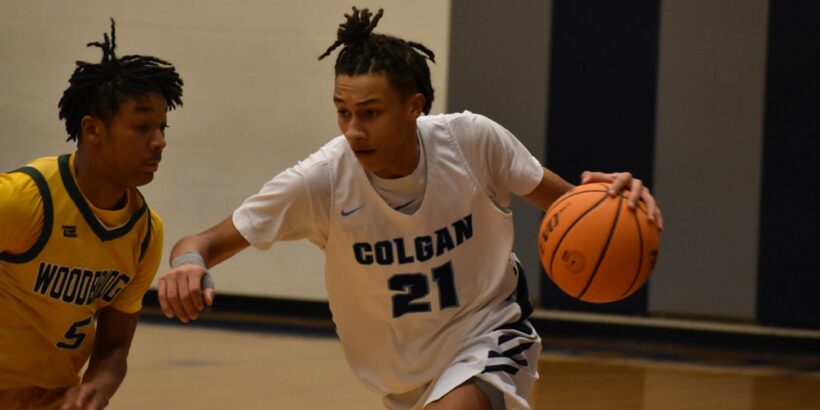 Colgan came into Tuesday night’s home battle with Woodbridge winless in the district, but also healthy for the first time in a while. The Sharks then showed how formidable they can be at or near full strength with a 60-46 victory.

Dynamic senior guard Skyler Smith had 16 points for the Sharks. 6’7″ sophomore Nate Ament, a name generating college recruiting buzz, led the way with 23 points, 13 rebounds, and five assists. He was also an invaluable presence on defense, protecting the paint and making it hard for Woodbridge to pass over him when he was at the top of the Colgan zone.

The Sharks also got a big lift from another sophomore, 6’4″ Eann Pennix, who returned to the team following a bout with illness. Pennix came off the bench to score 11 of his 13 points in the second half and was key in pushing a close game into Colgan’s favor.

“Just happy to be back,” Pennix said after the game on his way to the locker room.

Pennix couldn’t stop smiling after the contest was over, for good reason. His team, which had only lost one game in November and December, was mired in a two-game losing streak. In a loss against Potomac, the Sharks were down not just Pennix, but several players for various reasons.

On Tuesday the Sharks showed what they’re capable of when healthy. But it wasn’t easy against Woodbridge the first three quarters. In fact, the Vikings led 36-29 roughly midway through the third quarter after Torian Clark-Stewart stole the ball and took it coast-to-coast for the visitors.

The Sharks (1-3, 9-3) regrouped after a time out, and embarked on a 20-5 run soon after that extended into the fourth quarter. Pennix was a big part of that, capping the run with an offensive rebound off his own miss that made it 49-41 Colgan.

Woodbridge (1-3, 6-7) kept it close until the very end, with star senior guard Dylan Simmons (18 points) pacing the Vikings’ attack. But Colgan’s defense focused on stopping Simmons, especially in the second half, and Courtney Coffer’s team was not able to provide enough offensive support to supplement him. The other Vikings shot 12.5% from three-point range and 27% from field goal range.

Meanwhile Smith and Ament were more than enough to supplement Pennix’s nice second half. Smith, an athletic guard who is one of Northern Virginia’s best finishers at the rim, ensured his team didn’t take bad shots late. Smith and the two sophomores were dominant in the paint, just those three combined out-rebounding Woodbridge 21-9 in the second half.