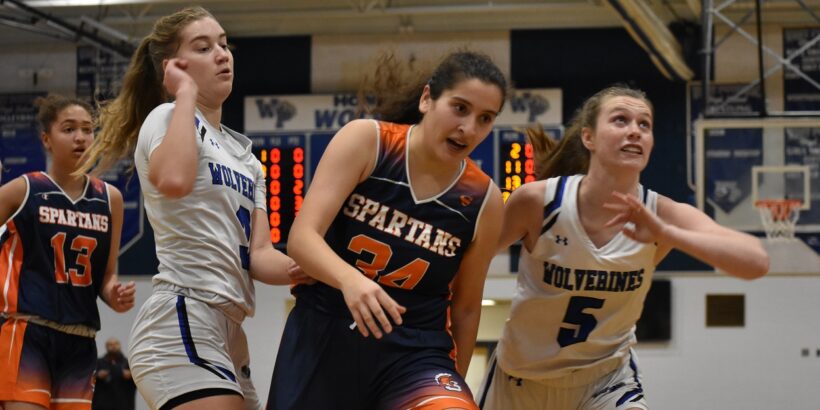 With their DJ in the house Thursday night, the West Potomac Wolverines demonstrated why they’re contenders in the Patriot District and beyond. After a plethora of steals and a quick lead from the jump, the Wolverines displayed patience on offense down the stretch to take down the West Springfield Spartans 42-32, to move to 5-1 in district play and tie the Spartans for second place.

West Potomac got off to a hot start, leading 17-5 after one thanks to a couple of threes and easy buckets in transition off the press. Three different Wolverines got at least one swipe at the ball as the otherwise poised Spartans struggled to find their offense.

This season, West Springfield has been stellar on defense, holding opponents to around 30 points per game. While the Wolverines may have been finding their groove on offense early, the Spartans still displayed some defensive power, with three players getting at least one block in the opening period. At the end of the first, West Potomac was up 17-5.

“Coach Gibson’s teams are always good defensively, we’re used to that. We were just trying to concern ourselves more with what we were doing, taking care of the ball, making good decisions. We’ve been working on that the entire year, trying to get it to all come together.” said WestPo Head Coach Brian Colligan.

The Spartans tightened up in the second, opening up their offense by cashing in from beyond the arc to get back into the contest. Their defense gave up only three field goals in the quarter, and then went into halftime only down by eight.

Sophomore Olivia Jones (11 points, five steals), got three steals in the third to help keep West Springfield at a distance as the Spartans cut the lead to as few as six. She definitely accomplished her goal for the game of working on her defense, and praised her upperclassmen teammates after the game for always having her back.

Down the stretch, it was the Wolverines’ patience on offense that sealed the dub. Despite the Spartans throwing everything they could into their defensive schemes, West Potomac stayed patient and managed to get good looks at the basket. Going into more district play and post-season tournaments, Coach Colligan stressed the importance of his team playing its best basketball now.

“Right now, it’s not so much of what other teams are doing, it’s us trying to find our way and we’ve had some ups and downs. Everybody in the district is just clawing at each other and we’re just trying to get better.”

West Springfield (10-4) was led by freshman Lilia Mellor with 12 points, three boards, and one steal. Sophomore post Kalina Rapoza had three points, nine rebounds, and one block. The Spartans get their chance for revenge on February 7th, and play first-place Robinson on Tuesday.

West Potomac (8-6) travels to W.T. Woodson on Tuesday for another district contest. Coach Colligan also celebrated his 100th win tonight, something he credited all his former players with.

“It’s pretty cool but at the end of the day it’s a tough win in the district. We’re really excited about it and now we gotta start preparing for Woodson.”