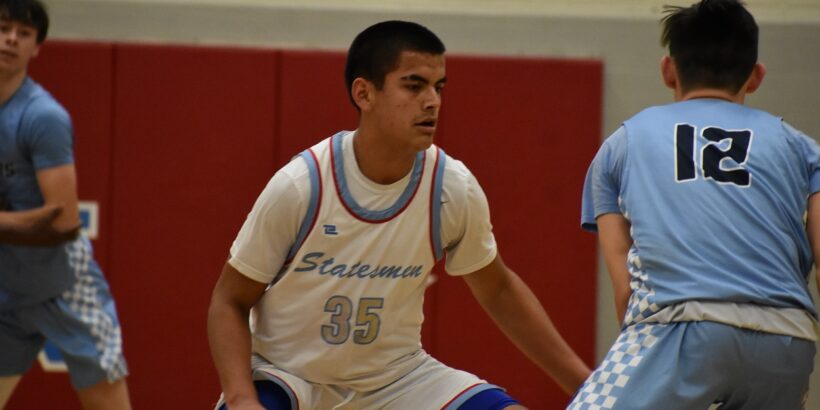 The Patriots never had a chance from the start, falling behind 19-9, as the 13th-ranked Statesmen (13-2, 5-0) executed their Pack Line defense to limit Yorktown’s scoring opportunities while forcing turnovers.

So frustrating was the Statesmen defense (Pack Line explained later in the story), at one point in the second half, the Patriots had as many charging fouls (four) as Marshall had total team fouls for the game.

Marshall’s efficient, fundamental, feet-moving defense was even more remarkable in its Tuesday night win at Herndon when the Statesmen had committed a single foul for the game until the final two minutes of its 57-37 win.

Friday, junior guard Jason Penn led the Statesmen with 14 points on a solid offensive performance but instead spoke of his team’s defense afterward.

“Our assistant coach Paul Wesnofske drills us on gap positioning during practice,” Penn said. “It’s a ‘heavy help’ defense based on gap positioning. We all stay locked in and stay in our gaps. For us, it’s about limiting points per possession and holding teams to only one shot.”

Marshall is the stingiest team in the Northern Region at 39 points allowed per game. Yorktown entered Friday’s game with the district’s highest-scoring offense at nearly 62 points per game.

“We missed Matt, he’s an amazing player, but we all pitch in,” Penn said. “We don’t want him to have to carry so much weight of the team on his back.”

Lenert, a senior forward, is day-to-day with a thigh bruise. Statesmen coach Jerry Lin said he expects who he calls his “best player” back for its next game on Tuesday.

Lin praised Lenert, a College of Charleston commit for soccer, about his dedication to the team, saying Lenert has postponed a tonsillectomy until after basketball season.

“He sees there’s something special going on for our team this year and wants to fully be a part of it,” Lin said.

Marshall’s only losses were an early-season defeat to Colgan and to an out-of-state opponent in a holiday tournament.

Lin said adding Wesnofske to his staff has been a difference-maker. The former Langley assistant was referred to Lin by former Langley coach Scott Newman, who had Wesnofske on staff in recent years.

The Pack Line defense is a basketball defensive strategy that has gained a lot of attention based on its success at the University of Virginia.

Described by hoopstudentcom, it is a variation of man-to-man defense that implements on-ball defensive pressure and off-ball actions in which defenders will either sag into the pack line or deny passing lanes to limit or prevent offensive scoring opportunities.

The pack line is basically an imaginary line covering the perimeter areas inside of the three-point line about 16 feet from the basket.

Essentially, any four off-ball defenders who are not currently guarding the player with the ball should be within that pack line standing in the gaps between the top/wing and the wing/corner.

The only exception to that rule is if an offensive player ends their dribble, a concept known as a dead dribble within the pack line defense.

If that occurs, then defenders who are on pass away near the perimeter can possibly come out of the pack line to deny their respective assignments from easily receiving the ball.

Under coach Mark Gray-Mendes, Jefferson is another team that has performed well with the Pack Line defense. Earlier this week, it upset Annandale in double overtime.

“You can’t go inside with the ball and it’s hard to penetrate it with a dribble drive,” he said. “Your jump shooter has to be moving to an open spot on the floor. But if you can’t make outside shots, it doesn’t matter. Good zone-defense coaches will use some aspects of the pack line. You have to have someone on staff who can teach it.”

Friday’s loss was the second in a row for Yorktown, which has abandoned its heralded full-court, four-quarter press defense that coach Joe Reed implemented in recent years.

He said this year’s squad’s personnel doesn’t fit that approach as well as those in the past, but the Patriots players know how to run it and call on it upon occasion.

Reed said his team has over-achieved for the most part during the first half of the schedule. On Tuesday, it fell to McLean. Trailing by 13 entering the fourth quarter of that game, Yorktown rallied to within two but couldn’t get any closer.

Early in the third quarter against Marshall, the Patriots set up that pressure defense for the Statesmen inbounds play after a basket and Penn called a defensive audible and took off toward his basket and received a long inbounds pass for an easy basket.

Sophomore guard Andrew Maria had 11 points off the bench to lead the Patriots.