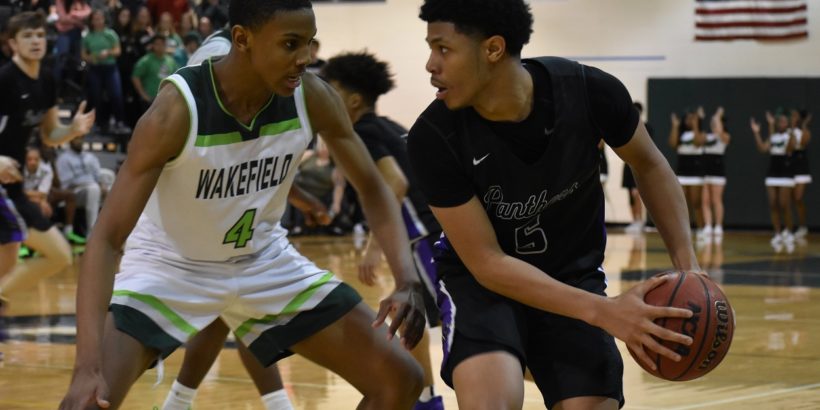 To say Potomac Falls’ win on the road Thursday night at Wakefield was meaningful to Panthers coach Jeff Hawes and his team would be an understatement. Sure, it was a do-or-die game with a berth to states on the line, but the victory was even sweeter considering it came against a very quality opponent.

“This was a big one,” Hawes said after the game after his team had defeated the Warriors, 73-67. “Tony [Bentley, Wakefield coach] does an incredible job–they’ve kind of been a thorn in our side for a few years.”

Indeed the Warriors have. Wakefield had defeated Potomac Falls the last two postseasons and when the Panthers lost to Freedom in last week’s Potomac District tourney, Hawes knew his postseason road to states would have to go through Wakefield. He knew his team, undefeated until the loss, had to elevate its game even further. The loss served to inform the Panthers of that fact.

“The loss turned us around,” Hawes said. “We needed it. We probably don’t get to the state tournament if we don’t lose that game.”

On Thursday it took a total team effort. The Warriors are known for their press and defensive intensity and Potomac Falls generally handled it well. The Panthers only were hurt by turnovers for small stretches of the game. They matched Wakefield’s defensive intensity with aggressive offense, getting to the free throw line an astounding 48 times on the evening.

The game was close early, with Wakefield leading 18-16 after a quarter. In the second quarter the Panthers did a good job on defense and started to get a little mojo going from the perimeter. Senior guard Peter White was big, burying two threes and leading in his team in scoring with 10 points at the half. After out-scoring the Warriors 20-11 in the frame, Potomac Falls led 36-29 at intermission.

“It’s all about the system we’re in, it’s all about everyone working together,” White said after the game. “It’s not about individuals that’s just how we do it.”

Wakefield came out strong in the third quarter, cutting the Panther lead to a single point. The Warriors though, with less depth than Bentley has had in recent years, had trouble sustaining the energy level necessary to overtake the Panthers. By the end of the third quarter the Panthers’ lead was back to seven.

Potomac Falls extended its lead to double-digits in the fourth but the Warriors wouldn’t quit. An athletic steal and finish by Wakefield senior guard Jared Watkins brought the Warriors to within 64-58 with under two minutes left. Potomac Falls, good from the free throw line most of the night, missed a few late. With 9.2 seconds left senior Chris Warner followed a Watkins miss to bring his team to within 70-67.

The Warriors persistence was admirable, but not enough. The Panthers handled the Warrior press and held onto the ball, as they were able to do most of the night. Senior guard Connor Birch then buried two free throws, the Warriors missed a quick shot, and the game was over. Potomac Falls advanced to states, Wakefield’s season was concluded.

Junior forward Landon Hawes was huge for the Panthers. He had 16 second half points to finish with 23 on the evening, also contributing nine rebounds. Potomac Falls star forward Ian Anderson was also huge. He got to the line 14 times en route to 14 total points, also pulling down 14 rebounds on the night. Perhaps most importantly, he provided his team an option at the five for bringing the ball up the court against the Warriors’ press.

For Wakefield the duo of Warner and Watkins led the way with a combined 33 points, 19 rebounds, and ten assists. White finished with 14 points for Potomac Falls, which advances to a rematch with Freedom in the 5C Regional title game Friday night.

“The loss re-focused us, gave us some intensity in practice,” White said. “It let us re-focus on the goal which has always been regionals and then states. This is where we need to be.”