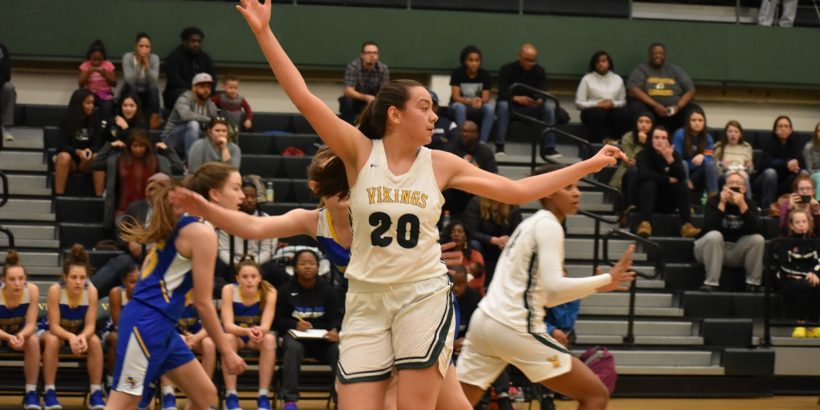 Woodbridge's tall and talented Vanessa Laumbach is one of a deep stable of capable players for the Vikings.
Share List

There’s more parity in girls basketball this year than last. Oh, the top teams are still strong, especially in 5C, but things are pretty wide open. Going to be fun week.

REGION 6D
This is easily the most wide open region, with several teams without byes capable of winning the whole shebang. Madison and Osbourn Park are the favorites. They have byes and have started to play really, really well of late. Madison hasn’t lost this calendar year and was up like 28-3 on Oakton at one point in the Concorde final. Osbourn Park, after losing its first game to a good Stonewall Jackson team, has now beaten the Raiders three times in a row. Both teams have considerable height, shooting, play-making and defensive ability.

Still, both teams are beatable. Madison is heavily dependent on freshmen, albeit highly talented ones. The Warhawks have gotten an offensive boost from said freshmen, but they remain relatively inexperienced on the big stage. If Madison is missing outside shots lots of opponents in this talented region will be able to give them a game. Osbourn Park is also dependent on some young, albeit again talented players. The key to beating them remains controlling Shay Hagans. The Jackets can be in trouble when she is limited or off as we found out during a couple of OP losses in December.

But that was December and those two teams are coached by two of the best coaches around. They’re hot and they are the favorites.

Marshall was upset by Jefferson in the National semis and now pays the price by hitting the road the entire tourney. First up is Herndon, a highly dangerous although young team. The Hornets started the season slow but played a ton better the second half of the season, scoring big wins over very good teams like T.C. Williams and South Lakes. A deep run through the tourney will be difficult for the Hornets, but Maddie Kimble is one of the more underrated guards in the area. The Statesmen, powered by sophomore guards Christina and Mary Trivisonno and Grace Grill, will be tested, especially with guard Zoe Soule battling injury.

Oakton and South Lakes will be very solid favorites to beat Battlefield and Westfield in the first round, though it would be a mistake to under-estimate either. Battlefield has one of the best players in the region in Kat Jenks and Westfield has clearly improved after a rough start to the season and losing Hannah Williams to transfer (Stonewall). Still, it’s hard not to think about a potential second round matchup between the run-and-gun Seahawks and the deliberate Cougars. Both teams can win the region and pace will be crucial if the teams meet.

The other two first round matchups are intriguing. Stonewall-Langley is a rematch of a great game the Saxons won at Langley earlier this year on the Winter Solstice. Winner gets Madison. We’ve long regarded Chantilly as a potential sleeper this year. The Chargers, powered by sophomores Megan Baxter and Meghan O’Brien, have their other pieces healthy and can make a run in the tourney. Patriot, meanwhile, it seems is always capable of a run. They’ve done a great job in this tournament recently.

McLean awaits the winner of Chantilly/Patriot. The Liberty Tourney Champs can win this tournament as well. We’ve long recognized junior Elizabeth Dufrane as one of the most dangerous shooters around. The Highlanders are a great mix of experience and young talent.

Prediction? No frickin’ way in this region. We’ll say one of Madison/Osbourn Park will make the final, with the other of those two upset along the way by one of the myriad of teams here that can play at championship level. This draw is going to be great. Would anybody be that surprised if even under-.500 Langley made a run? We wouldn’t be.

The number one-ranked team in our Nova Nineteen rankings has been Woodridge since the Vikings beat Paul VI earlier this year. They are the solid favorite to win the region here. They are deep and talented and coach Tamika Dudley always does a fantastic job utilizing her depth and getting players to embrace their roles. It can be argued that Aaliyah Pitts is the most dominant player playing in either Class Six tourney. We’re fairly sure we wouldn’t disagree.

Still, potholes abound for the Vikings. They do their best to play a tough non-conference, but we always worry the Cardinal District doesn’t battle-test them as much as some other districts would. Take the rugged Patriot District for instance. Robinson, who didn’t even make the regionals out of the district, still has double-digit wins over Forest Park and Colgan, Woodbridge’s closest competition in the Cardinal. Lake Braddock, South County, and West Springfield all sit on Woodbridge’s side of the bracket, and while all would have a slim margin for error against Woodbridge, all could pull an upset.

West Springfield is perhaps the greatest threat. The Spartans have fielded good teams the past two years but this year feels different. The Spartans still have depth and play defense, but it seems Molly Sharman and company might have a little more mojo this year, especially on offense. The Spartans are both the regular season and tourney champs in the Patriot. They are extremely battle-tested and Billy Gibson has obviously seen it all as coach.

Lake Braddock too, although a little too inconsistent for our liking, seems like it has a little more juice than usual this year. They’ve got height and strength with Julia Joachim down low. The Bruins always play good defense and they have a little more athleticism than in years past. Barring a significant upset by a gutsy Freedom-Woodbridge team, Lake Braddock would play West Springfield in the second round. The teams split their regular season meetings.

One team to really watch is South County. They have players that can hurt you all over in the frontcourt and backcourt. Trouble is, the Stallions have a tough draw. West Potomac is a smart and rugged team and if the Stallions get past them they get Woodbridge. Not a fair draw for a team we’ve regarded highly all year, but Stallion coach Aseem Rastogi doesn’t care. “Desiring fair treatment is the mindset of the mediocre,” he told us earlier today.

South County is a threat to everyone in the region with their shooting (Keagan Schwab) and size (Nelliah Wilson). What especially makes them a threat to Woodbridge is point guard Gabriella San Diego. If she’s healthy, she’s electric and dynamic and can single-handedly offset the Woodbridge press. Still, let’s not get ahead of ourselves. We can see South County pushing Woodbridge, but we can also see them falling to West Potomac in a game in the thirties or low fourties.

In the top half of the bracket T.C. Williams is the solid favorite. The Titans are again led by do-everything guards Trinity Palacio and Sasha Bates. They will be difficult to stop in the clutch. Those two are seniors, and they form a backcourt with more experience than pretty much everyone. T.C. does miss the graduated Levenberry twins, however. They are capable of winning the region but now also vulnerable to bigger and good rebounding teams.

Hayfield is going to be really good next year and has such a player to give T.C. problems in Rachael Ross. Still, T.C. handled the Hawks twice in the regular season and Hayfield must first get past up-and-coming Forest Park on the road. The Bruins have improved rapidly this year and are a program on the rise.

As is Colgan, powered by ridiculously talented sophomore Alyssa Andrews and capable, veteran guards. They host Annandale, whose backcourt of Jayla Irvin and Sarah Shamdeen can cause anyone problems. Don’t sleep on freshman forward Jane Elkins, either. The winner of that game will challenge W.T. Woodson, the fourth team from the Patriot District. The Cavs were the lowest seeded team in the Patriot Tournament, but beat Fairfax and Lake Braddock en route to the tourney final. They are capable of giving T.C. Williams problems if they can keep the score in the fourties, at worst low fifties.

Tough to predict anyone but Woodbridge here but it will not be a cakewalk for the Vikings.

Finally. Freedom-South Riding-Edison is the most anticipated girls matchup of the year and it is highly unlikely the teams won’t meet for the region title. (then again in the state semifinals by the way) Last year Freedom won the regional title but Edison rebounded to win the rematch at states. These are two titans that we’ve been waiting to battle for months now. It should be a toss up–Freedom can exploit Edison inside, while when Edison hits threes and defends nobody outside of a nationally-ranked team can compete.

We haven’t even thought about who we like in this matchup. Maybe we just don’t know. Can’t wait for Boston College-UVA battles between Jaelyn Batts and Carole Miller next four years after this one, though. Heh-heh.

What makes us sad is there are some very deserving teams in this region who are blocked from making a state run by Edison and Freedom. Start with Tuscarora. The Huskies have lost three times to Freedom this year but we love their squad again this year. Isabellah Middleton is awesome, and the Huskies have a lot of players doing what it takes to win. The Huskies host a gutsy but somewhat injury-plagued Falls Church team in the first round. The Jags can cause the Huskies problems if they aren’t careful.

Potomac Falls and Jefferson have had really nice seasons, with both teams winning more games than we can remember in years. Their first round battle at TJ is one of the best matchups in all the regional tourneys. The Colonials are likely the favorite at home. We see Mallory Brodnik’s smooth senior inside play as the likely difference. Still, this game will almost certainly be close and low-scoring. Potomac Falls has solid guard play and athleticism up front and a first-round victory would mean a lot to its program.

Briar Woods and Stone Bridge have gone underreported this year but both had good seasons. If either can somehow even close to beating Freedom or Edison in the first round, they will have had exceptional seasons. Sara Duffie and Briar Woods have played Freedom about as well as anybody this year, which is saying something for the job head coach Raven Short has done with the Falcons this year.