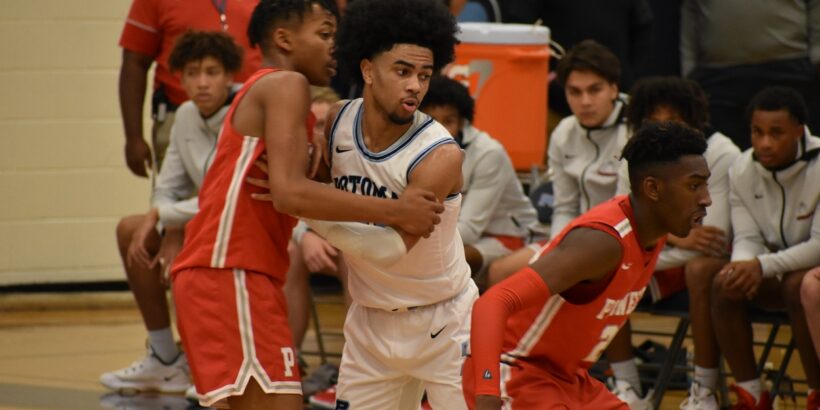 One of the Patriot boys basketball program’s slogans is “wake ’em up.” Once Sherman Rivers’ team woke up after a quarter Wednesday night at Potomac, nobody watching was left sleeping on the Pioneers’ chances this season.

Down 13-8 after a quarter, Patriot roared back to secure a double-digit win over the Panthers, 57-46. The game was the season opener for both teams, and a rematch of last year’s 6B Regional Final won by Potomac.

Many players from both teams who played in that game have since graduated, but Potomac senior Kyle Honore is back this season. The sensational Panther point guard torched the Pioneers early, scoring all of his team’s first quarter points as the hosts took the early lead. Honore hit three treys in the first quarter alone as Patriot struggled to stop him.

But Rivers prides his teams on defensive effort, and defense is what got Patriot back on track. Patriot held Potomac to just five second quarter points as the Pioneers took a 22-18 lead into halftime. The visitors did a much better job on Honore, and no one else on Potomac was really able to score.

Then in the second half, the Patriot offense woke up too.

Senior guard Mike Ackerman came off the bench to spark the Pioneers with some stellar play. He got a steal and a bucket, buried a three, and assisted on another score to help his team to a quick 7-0 run late in the third. Patriot was up double-digits at that point and never looked back.

Patriot continuously frustrated the Panthers with a pressure defense that forced scores of turnovers. Honore finished with 25 points, but did not hit a three-pointer after the first quarter. Senior forward Quinton Mumeka stepped up his game in the second half for Potomac, scoring all 12 of his points after halftime.