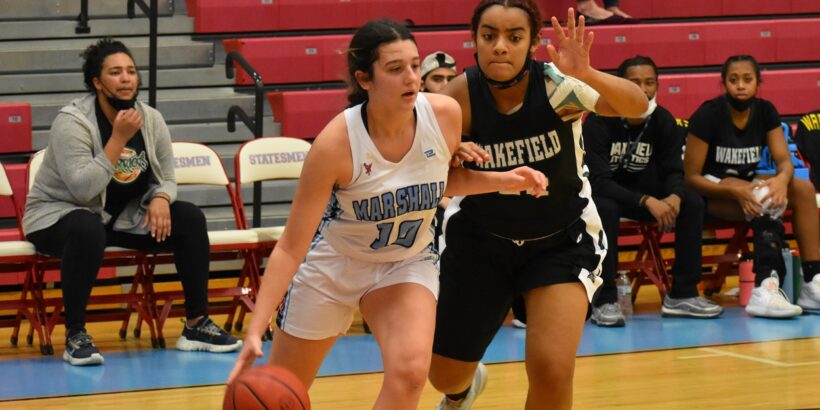 Sophomore Allie Nassif shot up a few inches in the past year or so. Once purely a point guard, she’s now taking on a much taller role with the Marshall girls basketball team, leading it in scoring in the early going this season.

She scored 16 points in the first half Thursday to pace the Statesmen to a 60-28 win at home against Wakefield in the Liberty District contest.

“She’d been coming to our camps for a few years, and this year, I could hardly recognize her,” Marshall coach Mike Trivosonno said.

The 5-foot-9 Nassif scored her team’s first two baskets of the game, and hardly let up after that. She effectively drove the lane to create open shots, draining eight in the half while helping her team to a 38-10 halftime lead.

Wakefield (1-6, 0-2) played short-handed for much of the game after its floor leader guard Maya Solis injured her left ankle with 4:27 left in the second quarter and did not return.

The Warriors played well physically under the basket but struggled against the quicker and more athletic Statesmen. Wakefield also missed 11 free throws.

Marshall dons a brand-new starting five this season after the departure of a significant senior class. Its roster includes four contributing freshmen. Ready to step in and lead is senior Rylie Hughes, who has been a solid part of their rotation the past two years. She scored 10 points on Thursday.

Sophomore forward Anna Musgrove (five points) provided spark at both ends of the court, consistently in the right spot, fundamentally.

“She’s our junkyard dog,” Trivosonno said of Musgrove. “She always seems to be where the ball is. At first, you might think it’s a coincidence. But really, it’s her instinct.”

Nassif played on the varsity team a year ago, which went 12-1 in a COVID-shortened season, and said this year is a “development” year for the squad.

“I’ll play wherever our coach wants me to play,” she said. “Last year gave me a good chance to watch and see how our team succeeds when we all work together. This year’s schedule in the Liberty will be tougher, but that’s a good thing. That’s how we’ll get better.”

Nassif said that coming out with stronger defense early against Wakefield made a big difference given her team’s tough showing the game before – a loss to McLean.

“We’re a young team, but we are learning that when we defend well, we’re more competitive,” Trivosonno said. “Allie is our best scorer. When she gets into the flow of the game [like she did Wednesday], she’s even better. She also was able to get the rest of the team involved.”

Ten players were in the scoring column for Marshall, including freshman Miotisoa Randrianantenaina, who had nine points, hitting a deep three-pointer just before the buzzer. It was part of an overall 27-0 run that extended into the third quarter.

Sam Stewart led the Warriors with seven points and Gigi Denton had six.