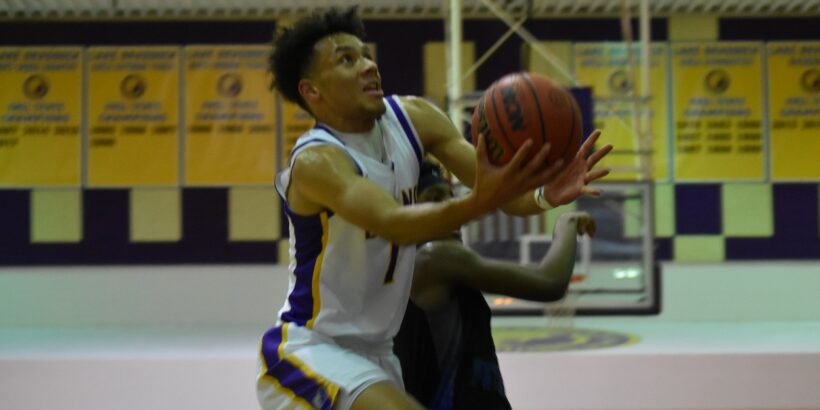 Lake Braddock senior guard Quincy Via attacks the rim in the first half of the win over West Potomac.
Share List

There’s not much that’s unknown about what happens when facing the Lake Braddock boys basketball team.

The Northern Region’s highest-scoring team, it’s more about pressure defense all over the court and taking quick shots with each possession – either in fast-moving half-court sets or via the fast-break opportunities it creates by turning the opponent over.

What is left to discover is how good this year’s squad can be. The No. 17 Bruins came into the season with scant varsity playing experience, and two of last year’s top players – guard Jaime Kaiser (Bishop Ireton) and center David Solomon (Virginia Academy) -transferred.

On Wednesday night, Lake Braddock’s system, directed by 500+ all-time wins coach Brian Metress, did enough to get past determined No. 14 West Potomac, 78-72, in Burke. It was the Patriot District opener for both.

Using its superior height and quickness early on, the experienced Wolverines (2-2, 0-1) dictated pace in the opening four minutes and watched the Bruins shoot poorly (they missed nine of their first 10 shots).

West Potomac built an early seven-point lead and led 20-14 at the end of the first quarter after Dominic Cianciolo hit two three-pointers in the final 30 seconds. Wolverines junior point guard Donovan Bass-Briscoe facilitated his team’s strong, organized start against the pressure defense, but picked up his second foul on a charge call with 4:08 to go in the opening period. He sat the rest of the half.

Bass-Briscoe finished with a team-high 16 points, but at times had trouble getting his team into sync in the second half. The Wolverines eventually spurted to finally tie the game when Terrell Neal converted a three-point play with 1:43 left in the third quarter. But Lake Braddock ended that period on a 7-0 run (five points from Via) and West Potomac could get no closer than four thereafter.

“West Potomac is a very good team with two of the premier players in our league [Bass-Briscoe and Nygel Anderson],” Metress said. “Other than Quincy, Trey [Seigle] and Davis [Wade], we don’t have a lot of experience. But the kids know that with this system, they will get to play, we run them in and out the entire game. We try use our pressure to wear the other team down. At times, I saw that [West Potomac] was exhausted. Some kids were asking to come out of the game.”

The three-point shooting and layup shooting was poor at both ends, Metress acknowledged.

“With the schedule for our district being that we play on Wednesdays (not Tuesdays) and Fridays, teams are out of rhythm,” he said. “And, our roster has been hit with the flu. We had three guys tonight who were out; they didn’t even dress.”

For now, Metress is able to lean on Via for scoring and leadership.

“Quincy is a tall guard – kind of a Ben Simmons type – he’s long and slippery and he can get by people and really has a calmness about his game,” he said.

Via said the Bruins’ goal is the same for every game: Go 1-0.

“We play as hard as we can and really try to pick up the pace,” Via said. “Our style is to impose our will. Like Coach Metress says, with us, ‘the circus comes to town’.” Lake Braddock entered the game averaging 85 points per game.

“We have a lot of skilled players who are getting up to speed with the system,” Via said. “They are running things correctly; they just need to get more experience.”

On defense, “it’s all about getting up in the grills of the players on the other team,” Via said. “We want to make life really difficult for them. On offense, we do well by keeping the ball moving, sharing the ball. I’m just trying to attack the gaps.”