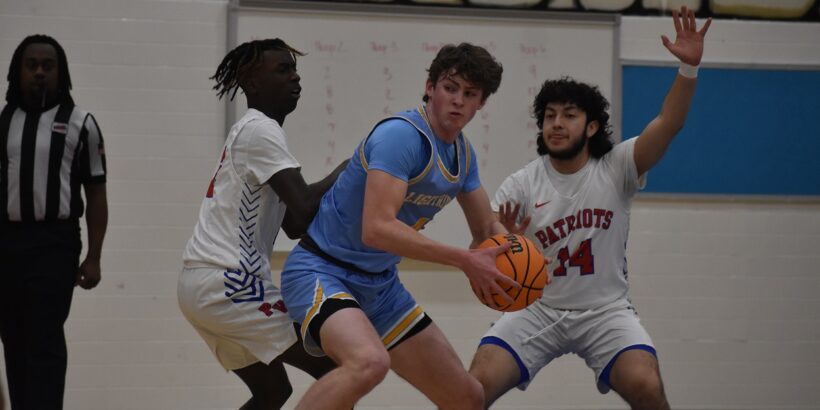 Early on in the Park View-Lightridge boys game Tuesday night, Lightning Coach Brian Washington yelled across the court to his star senior guard, Cole Lechner. The 6’5″ Lechner, a very good three-point shooter, was camped out at the arc on offense.

Lechner looked at his much, much smaller defender and went inside and posted up–not long after receiving the ball and scoring. He went on to score a school-record 29 points and total 10 rebounds, helping lead his team to a 58-45 Dulles District road victory.

Lechner never took a three-pointer on the evening because he never needed to. Instead, he went 12 for 17 from the field with shots mostly near the rim. The visitors only took two three-pointers as a team– both early in the second half–when Park View briefly went to a zone to protect the paint.

With a pronounced height advantage at every position against the smaller but scrappy Patriots, Lightridge was able to break open a tie game early in the second quarter. A 10-0 run gave the Lightning a double-digit advantage that they were able to retain for most of the rest of the way. The Lightning’s height advantage worked well on defense also, as Washington’s team limited Park View to under 30% field goal shooting on the night, with no three-pointers made.

Park View only managed 15 points by halftime, but was able to stay within striking distance in the second half by attacking the rim and drawing fouls. Sophomore Messiah Dixon’s driving lay-up early in the fourth quarter brought the Patriots to within 43-34, but his team could get no closer than that.

Lechner and Lightridge (2-8, 5-12), who shot over 50% from the field, got support from a number of players. Among them was junior guard Carter Working, who helped spark the second quarter run. He finished with 13 points and seven rebounds off the bench. Sophomore guard Joshua Yu was a stabilizing force all night, and added eight points.

Dixon (11 points, three assists) had a nice game for Park View (0-4, 12-4), while senior Alex Dominguez-Garcia (seven points, six boards) had a solid game off the bench. Noah and Isaac Calalang, Park View’s starting backcourt, did not have a great scoring game but made their presence felt on defense for the Patriots, coming up with several steals.