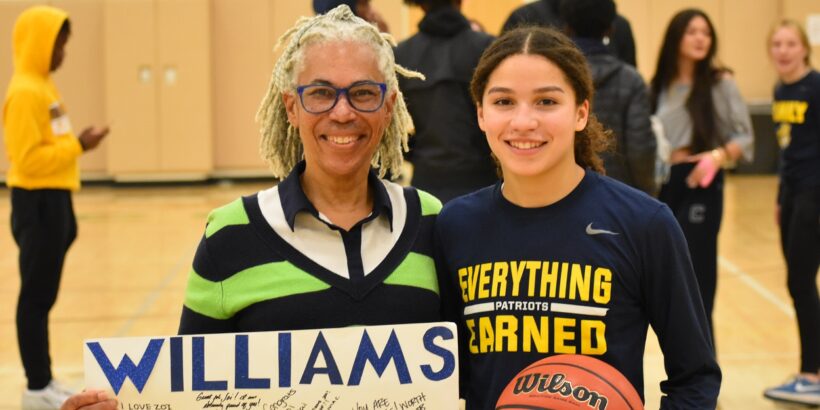 Williams reached the milestone early in the first quarter and the game was briefly stopped to mark the achievement. The Patriots seemed to feed off the crowd and the energy of the moment, as they took an early 14-4 lead over their VISAA Division III rivals.

Word of Life wouldn’t go away, powered by the strong play of senior guard Alexis Black. Black, an Appalachian State commit, got two steals for two straight layups at the end of the first quarter to close the Patriots lead to 14-10. Early in the third quarter, it was a Black bucket that brought the Ambassadors to within 25-22.

Virginia Academy got a lift from junior guard-forward Cai Smith to extend its lead soon after, however. Smith scored seven points and had two assists in the third quarter, and a Smith offensive rebound and score made it 39-30 late in the third.

That’s when a physical, hard-fought game up to that point started to have other consequences. Not even halfway through the fourth quarter two Word of Life players fouled out. With only six players available on the evening, Ambassadors coach Michelle Watts was forced to play four on five. Down double-digits at that point it appeared her team was dead in the water.

Turned out that wasn’t the case. Virginia Academy seemed unsure of how to exploit its advantage, and Black proved to be difficult to stop even with her team down a player. Black’s three-pointer with just over four seconds left closed the Patriot lead to 48-47. The Ambassadors fouled Williams when the Patriots inbounded the ball, but the referees judged it intentional.

Williams calmly hit two free throws, and as it was still Virginia Academy’s ball with 3.2 seconds left, the game again seemed over. Despite only playing with four, the Ambassadors managed to prevent the Patriots from inbounding the ball, forcing a five-second violation. Black’s desperate three-pointer to tie was offline, however, and Virginia Academy’s win was sealed.

Smith finished with 15 points, and senior Jailyn Alston added six points and seven boards to help Virginia Academy avenge a loss to Word of Life earlier this season. But while the win was certainly a team victory, the night belonged to Williams.

“It feels great,” Williams said as she celebrated with her family, friends, and teammates after the game. When asked what the team and her individual goals for this season were, she didn’t hesitate to answer.

“To repeat as state champions, play for a Power 5 school.”

Black led Word of Life with 21 points, while sophomore forward Nina Jenkins had 16 points and 16 rebounds.