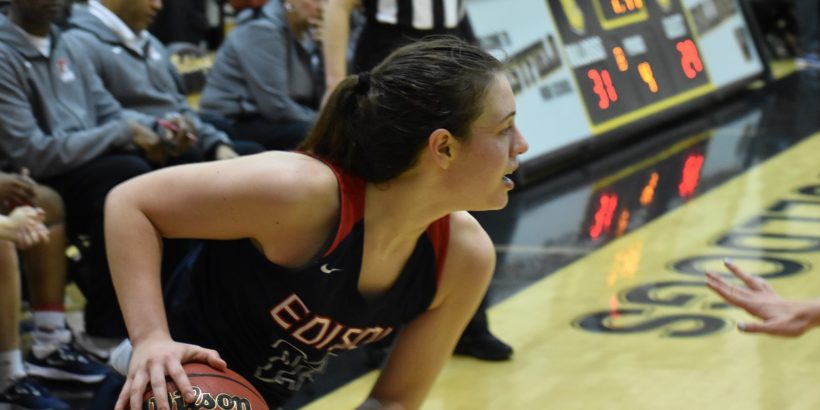 Charlotte Jewell's clutch three-pointer from the corner tied it in regulation, and Edison went on from there to defeat Marshall.
Share List

The bleachers in the Westfield gym were shaking Friday night as the crowd stomped its feet to the rhythm of a “defense” chant. The Marshall spectators were hoping to inspire one final stand as their team led Thomas Edison 39-36 with less than 40 seconds left in the girls basketball Class 6 State Quarterfinals.

Edison set two high screens near the three-point line that created space for senior guard Aurea Gingras, who kicked a pass out to senior guard Charlotte Jewell, who had an open look behind the three-point line directly in front of her team’s bench. With an encouragement from her coach, Jewell took the shot and the corner three swished through the net. The score was tied at 39 and eventually headed for overtime.

“I’m not going to say I knew it was going in, but it felt good when I shot it,” Jewell said with a smile.  “(Coach Dianne) has a ton of confidence in me, I knew she wanted me to take the shot, I heard her say – shoot it.”

Jewell’s clutch shot helped spark the Eagles (23-6) to a 49-41 win in overtime. The Brown University commit explained that heading into overtime, there was not a doubt in their mind that they would win.

“We stay together,” Jewell said. “As soon as regulation ended we were like: we’re going to win the game – this is our game.”

Jewel led her team with 14 points along with Gingras, a George Washington commit, who also contributed 14 points and opened overtime with a crucial three-pointer that started the 10-2 run to finish the game.

After the game Edison Head Coach Dianne Lewis expressed how proud she was of her team for their resilience despite losing multiple big games late in the season. Two weeks ago, Marshall upset Thomas Edison 56-53 in the National District Tournament Championship. The Eagles also lost the 6C Regional Championship to West Springfield last week.

“The regional final game was tough,” Lewis said. “It was our fourth game in six days, that’s hard for anybody. I think it was also an eye-opening game for us.”

The Statesmen (22-7) came into the game on a seven-game win streak, including a 37-35 win over Madison in the 6D Regional Championship, Madison had previously been 26-0 prior to the loss.

Marshall was led by its guards, junior Christina Trivisonno who finished with 15 points, and senior Zoe Soule who tallied 12 points. Coach Lewis knew their opponents’ frontcourt would find open looks throughout the game, so they stuck with man defense and dared George Marshall to beat them down low.

“We needed to neutralize their guards,” Coach Lewis said. “They’re a very good team on the perimeter. We played straight up man on defense with no help. I’m so proud of my team for all of the new plays that we put in, in a day. They stuck to our strategy.”

Thomas Edison also got a push from senior forward Bri Johns, who contributed nine points and led the team in rebounds on her birthday.

“It was the best birthday present – I didn’t ask for anything but this,” Johns said. “We keep our composure no matter what, that was held us together. We knew from the start that we were not losing this game.”

The Eagles will go up against Western Branch in the Class 6 girls State semifinals on Tuesday, March 10th.

“I think they believe,” Coach Lewis said. “We told them all season, this is where they can be – fighting for a state title.”