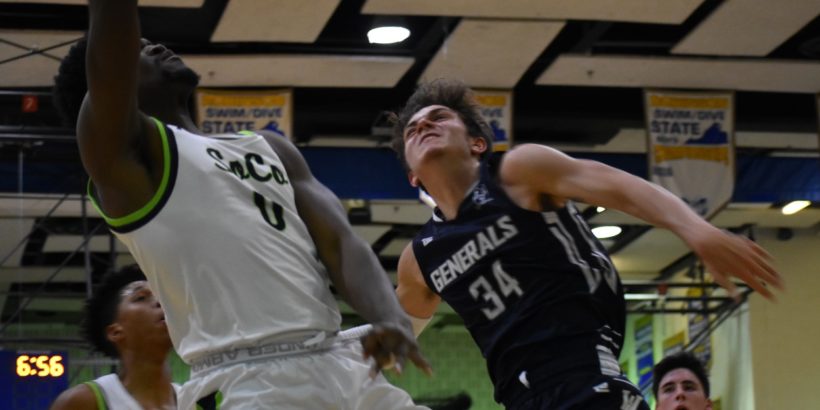 Excuse the rust from a one-week layoff for the South County boys basketball team. The Region 6C champion Stallions started slow against upset-minded Washington-Liberty on Friday night, but ultimately solved the pesky Generals for a 56-51 win in a Class 6 state quarterfinal game at Robinson.

W-L, playing without its suspended starting point guard Marino Dias (two technical fouls in Region final), used a deliberate offense and rattling defense to its advantage in a first quarter that didn’t see its first points until the 4:31 mark.

That lead grew to as much as 30-9 in the third quarter before the Generals fought back to close to within eight with 2:13 to play. But the rally ended there. A bucket at the buzzer provided the final score.

“We came with no energy at the start,” said South County coach Mike Robinson, whose teams have reached the state semifinals three years in a row. “This was a long layoff for us and we were stagnant. Our team played the better defensive game and that got us back on track.”

Robinson said his team was largely in control throughout, until a hard foul by Max Gieseman on a breakaway drive by Will Wilson with 1:29 to play created a scuffle behind the basket. Wilson’s shot did not fall, but teammate Andre Speight sprinted after Gieseman, who had tumbled to the floor, and shoved him. Speight was ejected. Inspired W-L showed even more fight thereafter and had several chances to pull to within seven, but to no avail.

“Our emotions got the best of us, and we let W-L back into the game,” Robinson said.

Trenton Picott led the Stallions with 19 points and Wilson added 15.

“The early part of the game was just us feeling them out,” Wilson said. “We adjusted and then [took it from there].”

Interestingly, the Generals opened with a contrived zone defense in which it began South County’s possessions with a 1-3-1 zone and then shifted to a 2-3 zone once the Stallions moved the ball from one side to another. It kept South County off-balance for most of the first half. The Stallions ultimately used their full-court press just enough to disrupt W-L, force turnovers and add to their lead.

Wilson, a senior, and Robinson, said the team has had their sights on another state title since the start of the season. South County won the state title two seasons ago. Last year, they fell to Lake Braddock in the semifinals.

“This is a deeper team, we have a better bench,” said Wilson, a fourth-year varsity player. “Omar McKinney, Brandon Walker and Jaheim Brown have been a big help.”

South County will face Region B champion Massaponax (20-7) at Robinson at 7 p.m. Tuesday in the semifinals. Massaponax built a 16-point fourth-quarter lead over Thomas Dale before holding on for a 58–53 victory at Cosby High School. Dorion Staples scored a game-high 24 points for the team from Fredericksburg and pulled down 16 rebounds.

For Washington-Liberty, this marked its first state tournament appearance since 1987. Its top players Max Gieseman and Anthony Reyes struggled early, combining to shoot 0-for-14 in the first half.

“Our goal was to keep the ball out of Reyes’ hands,” Robinson said.

Gieseman scored all 15 of his points in the second half and Reyes tallied his five points in the fourth quarter. Chip Johnson, filling in for Dias, added 12 points.

“Early on, we had some open shots, we didn’t knock them down; we had some nerves,” Gieseman said. “We were down big at halftime, and in the locker room told each other just to ‘put it all out there’ in the second half. We’ve been focused on getting this far all season. We did so because we believe in ourselves. It’s players like Chip tonight who really stepped up. [That’s how this team is built.]”