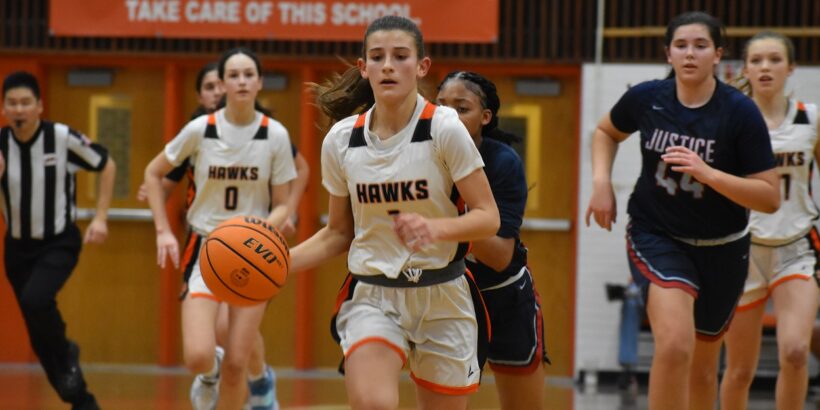 December to January can sometimes make an enormous difference to a young team trying to find its way. Last night that proved true for the Hayfield Hawks. Behind balanced scoring and patience down the stretch, they outlasted the visiting Justice Wolves 49-46 to improve to 6-8 on the season and 4-4 in the National District.

In December, Hayfield battled Justice and lost 51-36. The Wolves have had one of their best seasons in recent years so far, standing at 9-7 overall and 5-3 in the National after last night. They got out to a fast start, thanks to junior guard Makeda Endalkachew cashing in for three triples and freshman guard Taylor Rivers adding one as well. The Wolves came out in an aggressive trapping zone that stifled the Hawks at first. However, good ball movement cracked the zone and allowed the hosts to be up 17-14 after one.

In the second, it was Hayfield’s turn to hit from three. Junior guard Adriana Albritton (10 points, five boards, one steal) hit twice and Kaelyn Allen (seven points, one block) added one of her own from deep. The Hawks were able to continue using good ball movement to lead by six at the intermission. Head Coach Jason Kirby attributed part of his team’s success last night to the familiarity of their opponent.

The Hawks maintained a semi-comfortable lead heading to the fourth, up 42-34. Justice slowly crept its way back, not allowing a Hayfield basket until about the 4:30 mark of the quarter. The Wolves’ Rivers, Elizabeth Cheek, and Halimah Hajhassan all hit from beyond the arc to keep Justice within striking distance. But Hawk freshman guard Alexis Cox (eight points, three steals, one block) turned up the defense to keep the Wolves flustered and out of sync on offense.

As the clock wound down, Hayfield capitalized on a couple of big moments to seal their victory. With about three minutes to play, the Hawks used up almost a whole minute on offense to get a bucket in the paint from freshman forward Madison Davis that put them back up six after Justice cut it to just four. It was the kind of moment, Coach Kirby emphasized, that they are trying to build on going forward.

“What happens with a young squad, the ebbs and flows of the season go a little higher and a little deeper.” he said. “What we’re teaching our kids is moment by moment. Let’s not talk about the game, let’s talk about the moment. Because right now, we’re playing inconsistent basketball moment to moment. So if we can get to play by play, that turns into quarter by quarter and then we can start talking about game by game.”

While Justice and Hayfield will not meet again in the regular season, there is always a chance they could meet in district post-season play. The Wolves will turn their attention to Lewis next week. Hayfield looks forward to Annandale on Monday.