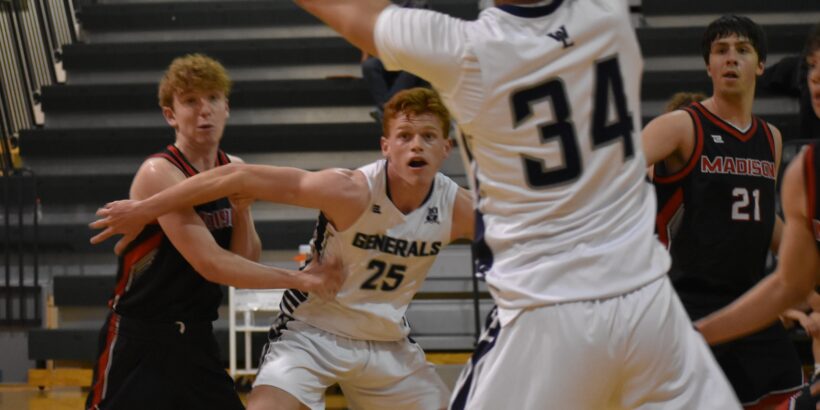 Washington-Liberty senior Faris Webber (19 points) prepares to receive the ball between Madison's Will Giery and Colin Sullender at Wakefield Monday night. The Warhawks won, 79-61, to advance to the winners' bracket side of the George Long Tournament.
Share List

ANNANDALE 69, #13 SOUTH COUNTY 54–In the first game of the day, Annandale upset South County (3-3) behind a balanced scoring attack.

South County (3-3) led early, but a three-pointer by Lanham at the end of the first quarter gave his team a 17-15 lead. The Atoms hit seven first half threes, extending their lead to 37-24 by halftime, and never looked back.

#15 CENTREVILLE 71, THEODORE ROOSEVELT (DC) 66–The Wildcats trailed most of the first half, but stormed back in the second to defeat Theodore Roosevelt.

Doyle Brown led the way for the Wildcats (7-1) with 23 points, while fellow junior Tristan Alvarez added 15.

“Kids fought and are very resilient,” said Centreville Head Coach Joseph Turner. “Doyle Brown is a shot-maker and we have so much confidence in his abilities.”

MADISON 79, WASHINGTON-LIBERTY 61–The Warhawks (7-2) used crisp passing and potent three-point shooting to bury the Generals in the third game.

Seniors Andrew Gorkowski (23 points) and Colin Sullender (20 points) led the way for Madison, which hit 13 shots from behind the arc–five from Gorkowski and four from Sullender. The Warhawks trailed the Generals 29-26 but closed the first half on an 11-2 run and trailed again.

#18 WOODSON over WAKEFIELD, forfeit–Unfortunately, the final game of the night was not played. The Cavaliers made the trip but Wakefield opted not to play, presumably because of COVID protocols. West Springfield will take Wakefield’s slot in the tournament the rest of the way.