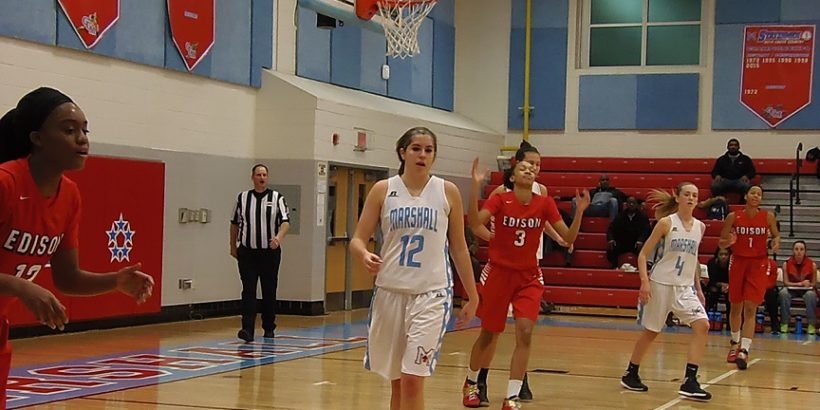 Edison may have a young team this year, but the Eagles also have an impressive winning tradition. Dianne Lewis’ team hadn’t lost a conference game in years coming into Friday night’s game at Marshall, and after the Eagles rallied late from a double-digit deficit it appeared they might stay unblemished atop Conference 13.

But the Statesmen, so used to taking losses in recent seasons, are now getting used to winning. Where in past seasons they found ways to lose, now they’re finding ways to succeed.

That was obvious with time running down and the Marshall girls down a point. Kylie Hardin received a pass from Rachel McFaul with around ten seconds left and drained a jumper from near the foul line to give her team the lead. After an Edison miss Hardin then easily drained two free throws to ice the victory.

The impressive senior did it all so nonchalantly that coach Mike Trivisonno likened her to George “Ice” Gervin after the game. She saw she was open, called for the ball and calmly drilled the shot without hesitation. She was just as calm describing things after the victory. The video is below.

“We were nervous but we really wanted to win this game,” Hardin said. “I was really confident taking the shot and the whole time [Edison was coming back] we told ourselves we were going to win.”

It was Hardin’s first game-winner, not just as a varsity player, but ever. Even with the shot it still took Marshall center Clara Ford altering the Eagles’ Carole Miller’s driving lay-up attempt a few seconds later to secure the win.

Marshall wasn’t lucky to defeat Edison–the Statesmen’s composure down the stretch earned them the victory. But the home team still felt fortunate to come away with the win considering Edison’s late momentum. Marshall (6-2, 12-5) stormed out of the gate thanks to the dominating interior presence of Ford (17 first half points) and four first quarter assists (two to Hardin for threes) from sophomore guard Kristen Tillman. Trivisonno’s team led 19-9 after the first and held that ten-point lead again at halftime, 33-23.

That’s when Edison (8-1, 11-7) started to claw back. The Eagles’ defense was key as they started to limit Ford in the post a little better even while still putting more pressure on Marshall’s ball-handlers. The sophomore Miller (14 points) was incredibly active on defense and attacking the rim, while freshman Bri Johns (12 points) hit clutch shot after clutch shot. Edison trailed only 41-38 after three quarters. Then, after a bucket late, the Eagles took their first lead of the game at 48-47. The way Lewis’ team was playing defense, it appeared as though victory was imminent.

But while the Eagles did a great job denying the ball into the post and Ford in the second half and after they took the lead, they lost track of Hardin on a rotation when it mattered most. That’s typical of young teams, and it was certainly typical of the senior-less Eagles in their 0-5 start. But although to be somewhat expected it was still disappointing for Coach Lewis, whose team had won 11 of 12 games coming into the contest.

“We didn’t execute defensively at the end,” Lewis said after the game. “Defensively we guarded well in the second half but we struggle with guarding a post player and she [Clara Ford] is hard to stop. The missed free throws, too–but we played I think three freshmen, one sophomore down the stretch. I’m still pleased with our overall progress–I’ve got a squad that is willing to work.”

Ford finished with 24 points and 11 rebounds and Hardin 11 points for Marshall, who moved a game in the loss column behind Edison in the race for the Conference 13 regular season crown. The teams continue conference play Tuesday when Marshall hosts Falls Church and Edison plays Wakefield, another team right behind the Eagles in the standings.

all stats are unofficial; additional photos below