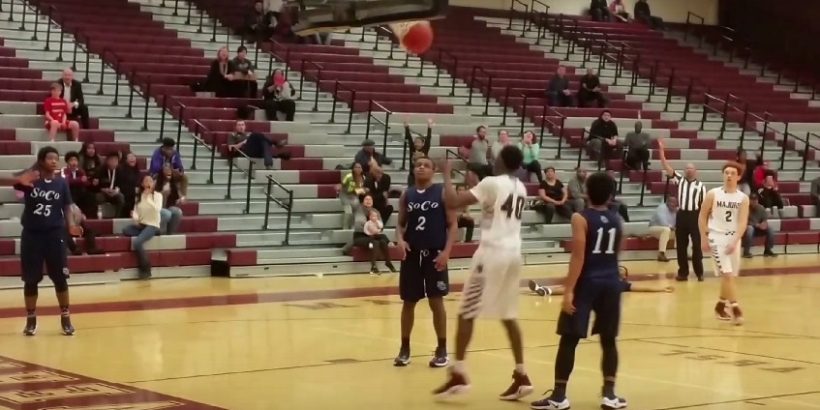 Mount Vernon senior Alpha Kamara's game-winner goes through. Kamara is not shown, as he faded out of bounds after the shot.
Share List

Coaches want the ball in their star player’s hands when the game is on the line. Mount Vernon coach Lou Golden considers senior guard Alpha Kamara his star, and Kamara cemented that sentiment Tuesday night against South County. Kamara hit a fall-away three-pointer from the corner as time expired to give his Majors the 58-55 home victory. It was a shot that will likely be talked about at the school for some time.

“All season he [Kamara] has been our go-to guy,” Golden said after the game. “He’s got ice water in his veins and he’s a very, very clutch shooter.”

This was the first time we’ve seen the Majors this year but I think we’ll buy that. Judge for yourselves with the video below, which captures one of the best buzzer-beaters we’ve seen this year–or any year.

It wasn’t exactly how Golden drew things up in the huddle following the time out, but he certainly didn’t mind. In a game of runs in which his team almost squandered a five-point lead down the stretch it was a hard-earned welcome victory.

The Majors trailed 14-12 after a quarter but opened the second on a 8-0 run to take the lead. South County fought back, however, clawing to within one at halftime thanks mostly to the strong play of guard Andre Austin. Austin had 14 at halftime to lead the Stallions attack and his offense was crucial for SoCo, which had trouble consistently putting the ball in the hoop against the Majors’ 2-3 zone.

They didn’t have trouble right after halftime, though. Austin and the Stallions started the third quarter on a 10-0 run. The senior guard was amazing, sparking his team with a steal and lay-up plus the foul and capping the run with a three-pointer on a dish from senior Garrett Reaves. Golden was visibly upset sitting on the bench as his team fell behind by nine.

But then Mount Vernon started an impressive run of its own. Kamara somehow got a deflected pass into the post to center Elisha Amoako who converted down low. Guard Josiah Jimboy scored off an offensive rebound. That started a 15-1 Majors run that gave the home team the upper hand.

The Majors kept the lead until late. Up 55-50 the Stallions scored and the home team missed two fairly ill-advised shots. Reaves again hit Austin for a three-pointer that shouldn’t have been that easy, but was, and South County found itself tied with Mount Vernon at 55 apiece with well under a minute left. If the Stallions could get just one more stop, it seemed like they had all the momentum going forward in overtime.

But they couldn’t get the stop. There was a timeout, a foul taken by South County because they had one to give, another timeout and then it was Kamara’s time to shine. Shortly thereafter it was his time to celebrate among his friends and teammates.

For South County (6-3, 8-7) Austin finished with 25 points partially on the strength of five three-pointers. Reaves had a nice game with eight points, nine rebounds and four assists. Junior forward Seth Dunn also had ten points, but Stallions leading scorer Elliott Johnson had an off-shooting night, going one of twelve from the field.

Kamara led the way with 17 points for the Majors (3-6, 7-10). While he is the team’s star this year, the Majors got three key performances from juniors. Jimboy had 14 points and six assists and Amoako had 12 points, 13 rebounds and a boat-load of blocks. Reserve Jonathan Hollingsworth, in his first game back from injury, had nine points off three three-pointers.

Kamara was happy to be the headline coming out of this contest, but the senior was also very cognizant of his teammates’ contributions. He even wanted to talk about them before he talked about his incredible shot, showing his humble nature.

“It was a hard game. We fought together and got it done as a team.”