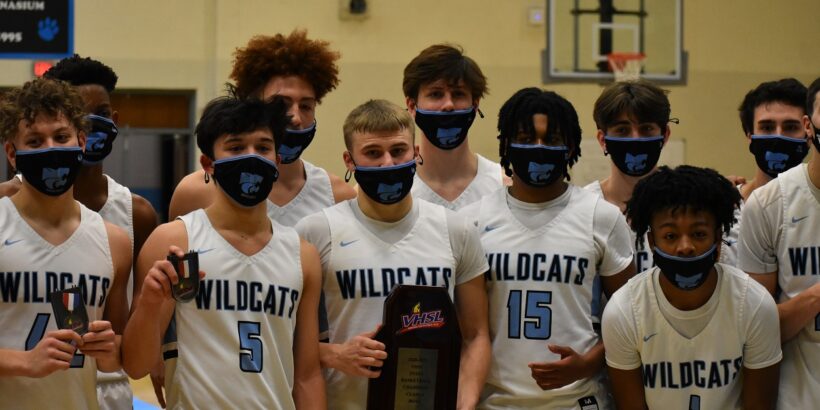 Up double-digits on Potomac midway through the third quarter, it still seemed inevitable Centreville would face a furious rally from the undefeated Panthers. That rally came, but the Wildcats showed the heart of a champion in turning it back.

With the game tied in the fourth quarter, Centreville’s defense kicked it up a notch to spark a 13-3 run. That proved to be the difference as the Wildcats won their second consecutive Class 6 State Title, 63-49.

“Down the stretch we told ’em we had to lock in [on defense], make ’em go to their second or third option,” Centreville Coach Kevin Harris said. “I think we did a decent of job of that–turned defense into offense.”

Early on it looked like the game would be a defensive struggle in general, as the game was tied at seven after one quarter. In the second quarter Centreville’s stars started to get untracked as the Wildcats took a 25-19 lead at half. Seniors Avery Ford and Chris Kuzemka, who will both play Division I football next year, accounted for 17 of those points.

Centreville (14-2) then went on a 9-4 run to open the second half, prompting a time out from Potomac coach Keith Honore. The Panthers came out of that hiatus a different team, embarking on a 15-4 run to tie the game at 38 after Anthony Jackson buried a three and Lorin Hall took it to the rack.

With the Panthers defense keyed on Kuzemka and Ford, and with Kuzemka, the Wildcat point guard, expounding a lot of energy just to bring the ball up the court against the Panther press, Centreville needed some others to step up. That’s what they did.

Junior Mason Jones scored a clutch basket at the end of the third quarter to give the Wildcats a 40-38 lead. Early in the fourth quarter Kuzemka and Ford scored, but so did Jones, Reece Schirmer, and Paul McClain (10 points). As good as Ford and Kuzemka are, it became clear everyone would have to contribute to best a team like Potomac.

“We challenged our guys–Reece, Mason, Paul, Ryan [Newell]–to kind of share the scoring a little bit,” Harris said. “We knew they were going to be keying on Chris and Avery–we’ve seen it all playoffs–and they did a great job today, not taking bad shots, cutting to the basket, offensive rebounds, free throws.”

Certainly it was a team effort to shut down Potomac down the stretch to procure the win. Still, Centreville’s big guns were obviously key. Ford had 17 points and 10 rebounds, and Kuzemka did it all, delivering 21 points first and foremost. The win was especially sweet for Kuzemka, as he had to watch his team win a co-state championship last year from the bench with an ACL injury.

“It was an awesome feeling to win the state championship,” Kuzemka said. “Especially after last year, getting sent home early before we could finish it off. Amazing feeling to do it this year with all my brothers.”

Potomac (13-1) was led by senior forward Tyrell Harris’ 17 points and nine rebounds. Junior guard Kyle Honore added 15 points for the Panthers, who were hindered by rebounding and an inability to get to the line as frequently as Centreville. Despite the loss, Potomac had already impressed in the state tourney with a road victory at Landstown. Two road victories in the state tourney just weren’t in the cards this season.

“Our guys had to lock in for 32 minutes against these guys,” Harris said. “They’re a great team and Coach Honore does a great job.”