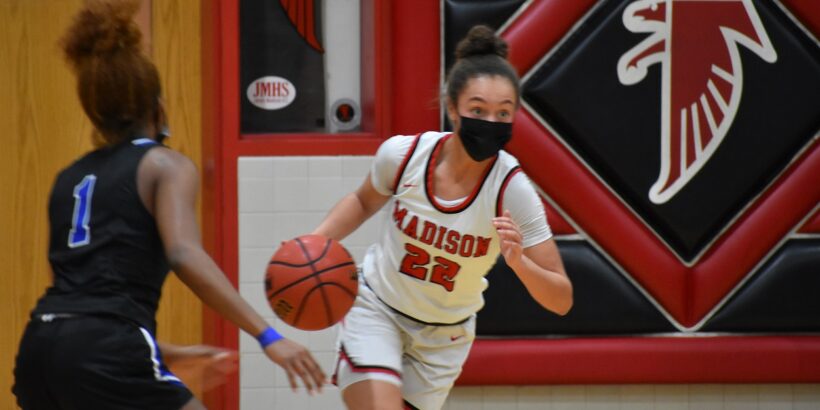 Madison junior Alayna Arnolie is a defensive standout, but also led her team in scoring as the Warhawks advanced to the Class 6 Final.
Share List

The postseason is always where you see great players stepping up and doing more, and that was evident in Wednesday night’s Class 6 state semifinal game between Madison and West Potomac.

With each team’s only loss coming from Chantilly, it was forecasted to be one of the best games this season, and surely delivered. Led by 16 points, three assists, and two steals by junior guard Alayna Arnolie, the Warhawks managed to suppress a second half comeback by the Wolverines to punch their ticket to the championship game and win, 54-48.

In a game that saw five lead changes in the first half, it looked as if Madison would run away with it in the second half and win the way it usually does, by double-digits. The Warhawks had closed the first half on a 9-0 run thanks to a flurry of threes and would lead by ten at the half, extending their lead to thirteen in the third.

The Wolverines, champions of the Occoquan Region, then proceeded to storm back and cut the lead down to a single point in the fourth quarter. Sophomore guard Mary Prater (19 points) knocked down three threes in the third and was key to sparking the West Potomac run. Senior forward Ambria Redfearn, who finished with 16 rebounds, was around seemingly every loose ball in the fourth as the visitors scrapped their way back.

That’s when the Warhawks’ defense tightened. Arnolie was a big part of that–on this evening she was tasked with the difficult assignment of slowing lightning-quick Wolverines point guard Danea Mackey down, the Occoquan Region Player of the Year.

“She’s their leading scorer most of the time, so I knew I had to stay in front of her because she’s really fast, and I was not expecting her to be that fast, so I had to make sure to cut her off or she could get a step past me. I was focusing on staying in front of her as best I could,” Arnolie said.

Arnolie is known for shutting down opponents defensively, and was named first team all-defense in the Concorde district this season, but also managed to lead her team in scoring. Sophomore Sarah Link added 13 points for the Warhawks.

The Warhawks (15-1) struggled to score during a stretch of time in the fourth, when the momentum had definitely shifted to West Potomac (12-2). Madison still managed to keep its composure.

“I said, you’ve practiced in this gym many times, like, you need to relax. You’re stressing, you’re up. Make sure you take your time. Get a good shot. I always say concentrate on what you can control,” said Madison head coach Kirsten Stone.

“Offensively, as they were coming back, during the timeout we talked about just taking a deep breath, and when you have the ball making a smart decision instead of just getting frazzled, and throwing it away. Staying calm, and letting the game come to us,” said Arnolie.

Madison was supposed to face Edison last March for the championship, until the game was cancelled due to early COVID concerns. Now in the same position many months into the pandemic, the Warhawks are feeling good about their chances this year, but don’t think too much about what could’ve been.

“Our message this whole time is to just make sure you enjoy the game and work as hard as you can. If we’re gonna be here, work hard. We don’t really talk about last year at all, to be honest. We just work on taking care of what we need to take care of each game,” said Stone.

“It’s kind of like unfinished business, so proving that we deserve to go that far, and using this next game to say we earned this last year, and we’re gonna prove it this year,” said Arnolie when asked about the opportunity.

OSBOURN PARK 48, COSBY 42
Trailing 20-16 at halftime, Osbourn Park (14-1) turned on the offense in the second half to down Cosby (Midlothian, VA) and advance to the Class 6 State Final against Madison. Senior guard Alex Harju led a balanced offensive attack for the Yellow Jackets with 12 points. All her points were on three-pointers.

The game will be played Saturday at 7:00 pm at Madison.