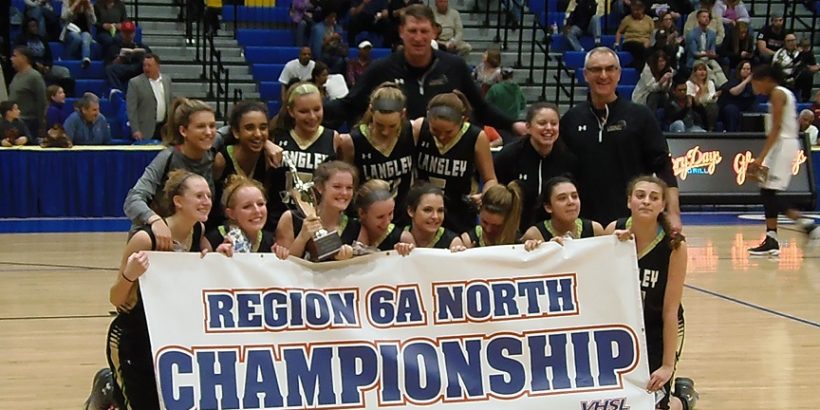 Sometimes when we cover Langley we don’t talk about star junior guard Jordyn Callaghan that much. That’s because the Saxons’ opponents usually focus on limiting her, so her stats usually don’t always blow you away. Plus Callaghan has a good supporting cast that often steps up when defenses key on her.

But on Saturday night against Battlefield in the 6A North regional championship game, Callaghan was absolutely dominant in pacing her team to a 45-41 victory. Callaghan scored 21 points and did it all. She grabbed seven boards. She came up with key steals and played great defense. She even blocked shots en route to being named the tournament MVP.

Langley needed all of its star player’s contributions against a tough Bobcats squad that gave the Saxons everything they could handle. Battlefield played incredibly physical man-to-man defense and for a good portion of the game got much better looks at the rim than Langley. After a tight first quarter the Bobcats’ Marley McLaughlin found Ahlia Moone twice for threes to give Battlefield a lead. The Bobcats held onto that lead through halftime and toward the end of the third quarter, when they led 31-26. Then things went south.

With just a few seconds left in the quarter Callaghan picked off an errant in-bounds pass and was fouled. She drained two free throws to close the quarter and the Saxons carried the momentum into the fourth. Callaghan buried a three off a pass from Elizabeth Bucy to tie things up. Olivia Augustini then hit Bucy under the basket for a lay-up plus the and-one. The Saxons’ defense forced turnovers and Battlefield couldn’t score. Soon Langley was on a 13-0 run and had an eight-point lead.

Battlefield closed the margin late and Langley missed a few free throws to help the Bobcats’ cause. The Bobcats had the ball down 44-41 with 15 seconds left, but a tough pass to Moone went through her hands into the backcourt for a violation. The Saxons added a free throw and they were the 6A North regional champions.

For Battlefield (19-7) Moone led the way with 18 points, hitting from outside and attacking the rim forcefully, especially in the first half. Dana Harrington added 13 points and 10 rebounds for the Bobcats, who will resume play in the state tourney next week.

As will the Saxons (24-4). Rachel Dunie scored nine points and had six rebounds for the victors. Bucy was especially good down the stretch, and finished with eight points and nine rebounds.

But most importantly there was Callaghan.