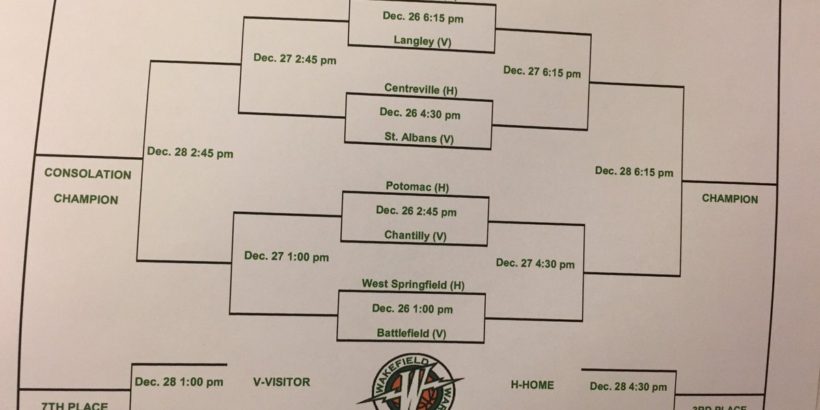 And…we’re back, and so is basketball. Things kick off today (Tuesday) with George Long getting underway at Wakefield. Talk about a stacked field: three top ten-types in Wakefield, Potomac and Battlefield plus solid teams across the board. Wakefield obviously enjoys an advantage at home, but a number of teams have the potential to upset the Warriors. Should be great, and there are several interesting contrasting style games in the first round.

These others get going Wednesday. How about Bulldog Bash? You could argue that field is as solid as George Long. The host Bulldogs finally have their full compliment of players now that their state title run in football is complete. Westfield is coming off a blowout win over Lake Braddock at home and an upset of powerful South Lakes on the road. South County remains undefeated and has to still be the favorite here, though, and Stone Bridge’s guards can carry them to a win over anyone if they get hot. Love that game with Herndon early and we LOVE that first round game between two solid teams in Marshall and Robinson. Great individual match-ups in that one.

The Glory Days Tournament is back at Lake Braddock. Defending champion Mills Godwin from Richmond returns, and they’ll have to get past Osbourn and then the winner of Hayfield/Maret to return to the championship game. High-scoring Lake Braddock has Osbourn Park first, then the winner of Colgan/Colonial Forge if they get past the Yellow Jackets. Some great match-ups in that tournament.

At Joe Cascio at Falls Church the field is wide open. If we were betting people, we’d bet on this one for fun–we’re just not sure on who. The great thing about this tournament is most games are likely to be very competitive. That Rock Ridge/Yorktown first round match-up is a nice game of contrasting styles, and keep an eye on Gar-Field.

Very good tournament (both boys and girls) at Rebel Roundball. Madison is playing well in the top half of the bracket, but can any of the public schools deal with Flint Hill and center Qudus Wahab? Madison actually played the Huskies earlier this season and couldn’t get it done. On the bottom half of the bracket host Fairfax is probably the favorite to make the championship, but they could also fall immediately to a very solid Forest Park team. McLean/Jefferson is a good first-round matchup as well.

Finally, at first glance you might not have as much interest in Mount Vernon’s Tournament, but this might be the most intriguing one of all. John Paul and especially Christ Chapel are two solid private school teams we just started covering, plus Mount Vernon, Oakton and Woodbridge are all very solid teams we expect to very possibly be postseason factors. The wild card is obviously Jesuit HS of New Orleans–we know nothing of these outlanders.

Still not good enough for you? Good Lord. Stonewall, Manassas Park and Freedom-Woodbridge are at the James Monroe Tournament. You could always head down to Richmond to see how St. Stephen’s and Potomac School stack up against some traditional powerhouses in the Benedictine Classic. Lots of good basketball almost everywhere this week and remember, we’ll update times, games and schedule every morning this week in our “schedule” tab!