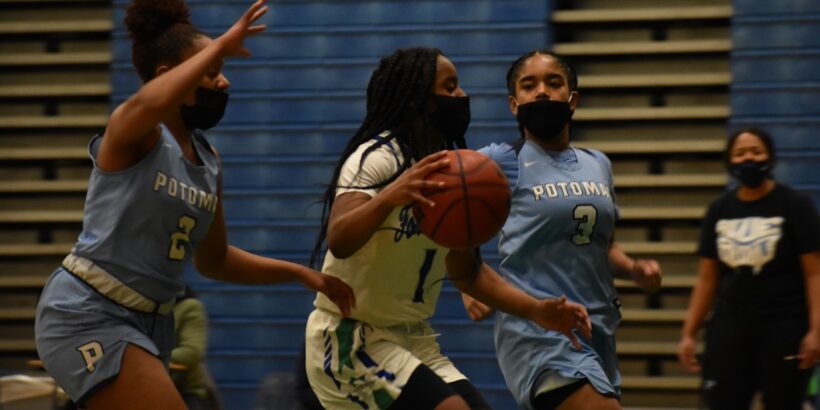 For whatever the reason, Coach Chris Baynham’s Bruins fell behind 12-0 to the visiting Panthers on Saturday afternoon. But, thanks to a couple of runs in the first and third quarters and 25 points from junior Angel Jones, Forest Park recovered to post a 55-44 Cardinal District win.

That might have to be the norm the rest of the way for the Bruins, who are facing a grueling, condensed end to the regular season after a two-week layoff due to COVID protocols. Of course with limited practice time and a lot of games, it helps to have a point guard such as Jones, who is just flat-out really good.

Jones, as well as Janiah Jones and Lydia Pedersen, were key to neutralizing the initial Potomac run. Once they delivered a few baskets the Bruins were able to set up their press and force some turnovers. A flurry of steals toward the end of the first quarter enabled the Bruins to take their first lead of the game, 15-14.

The contest was see-saw until the third quarter. Potomac’s aggressive man-to-man defense had limited Forest Park’s perimeter game up until that point, but senior guard Lauren Palmateer buried two threes and Angel Jones one in the quarter. Those helped the Bruins go on a 10-0 run and take a 40-32 lead going into the fourth.

With a fourth quarter lead the Bruins are tough to stop. Potomac was forced to extend its defense even more, which opened up numerous drives to the hoop for Angel Jones. The guard continuously was able to attack the rim and get to the free throw line, sealing the victory for the home team.

Palmateer finished with 10 points and Janiah Jones seven for Forest Park.  Ebele Okuadido had 10 rebounds as well for the smallish Bruins, who were able to out-rebound the physical Panthers on the afternoon.

“[Rebounding] is definitely a key for us since we don’t have too much size,” Baynham said. “So we have to have all five players crash the boards and preach that the defensive possession isn’t over until we get that rebound.”

Potomac didn’t get the win but has definitely established itself as a district contender in the near and immediate future. The Panthers (4-4, 4-4) were led by relentless junior Natayvia Lipscomb, who had 15 points and 11 rebounds. All eight players that played scored for Potomac, which is in third place in the Cardinal District.

Forest Park (7-1, 8-1) is in second place, meanwhile. The Bruins get a rematch with first place Colgan this week, which defeated them 45-40 Friday night.