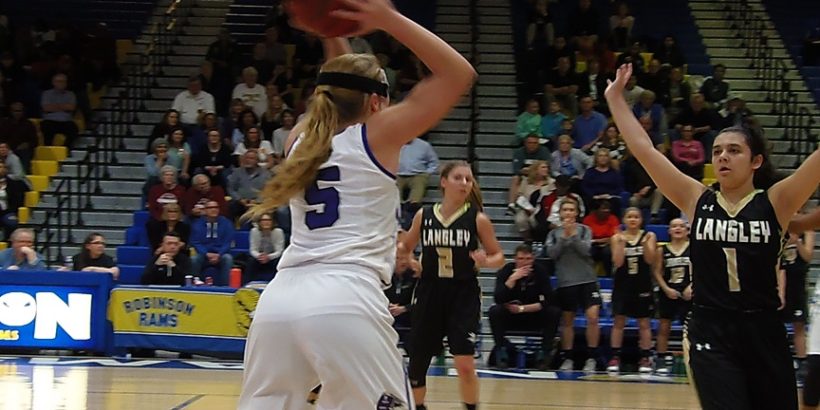 Jordyn Callaghan, Langley–Every coach we talked to when asked about stopping Langley mentioned Callaghan immediately. The Saxons’ guard just isn’t that easy to stop, however. She averaged around 13 a game in the regular season, but during Langley’s postseason run averaged about 17. That should tell you something about Callaghan, who rises to the occasion and against stronger teams. Doesn’t blow you away with her athleticism, but she’ll drive right by you if you discount that part of her game. Just does everything well and seems to have a motor that never quits. Hudl highlights here.

“Jordyn is an incredibly focused player that is able to commit maximum effort both physically and mentally at all times. She is a true floor general that has the ability to control how the game is played on both ends of the floor. Jordyn had a great junior season, but she has the drive and the potential to do even more as a senior next year.”

Kennedy Middleton, Tuscarora–Guard averaged around 20 points a game even without being much of a three-point shooter. Doesn’t really need to be much of one with her athleticism and ability to hit free throws at a solid clip (73%). Very difficult to limit even with teams game-planning for her first and foremost. Scored a season-high 35 points against Stone Bridge and was absolutely unstoppable in conference play. Best in transition where she has room to execute crossover dribbles and attack with her speed. Very good passer. Hudl highlights here.

Honesty Scott-Grayson, Paul VI–Dynamic, tall point guard who is an excellent passer. One of the top prospects nationally in her class. Just completed her first year at Paul VI after transferring in from New Jersey. Looks to get her talented teammates involved first but scores when necessary, such as when she contributed a season-high 20 points in a huge win over St. John’s.

Natalie Villaflor, Loudoun County–Led Northern Virginia in scoring by pouring in 25 a game. She’s described as a center, but a do-it-all forward probably describes her better. Gets a lot of her points running the court and methodically slicing through defenses for lay-up after lay-up. Makes it looks easy. Student of the game who also values defense and playing a complete basketball game. Very active on the boards. Hudl highlights here.

Amira Collins, Paul VI–Dominant 6’3″ post player committed to the University of Tennessee. Strong down low both on the glass and finishing on the block. Can surprise with range on her shot and is very good at the free throw line at around 80%. Had a season-high 25 points against Bishop Ireton in early February.

Paris McBride, Woodbridge–A dynamic point guard who brings all the talented pieces of the Woodbridge puzzle together. Can score but is perfectly content to get everybody involved–averaged around seven assists a game. Rebounds extremely well for her size. Averaged around 12 points a game but might look to score more next year with shooter Hanna Oliver departing. Has Division I interest and an offer from Delaware. Hudl highlights here.

Brie Perpignan, O’Connell–Hard to imagine where O’Connell would have been this year without Perpignan, who at times was the Knights’ only consistent scorer. Off guard who can also play the point. Always a threat to pick her opponents’ pockets with her quick feet and hands. Does a lot of her damage scoring-wise by using her quickness to get to the line, where she converts better than 3/4 of her free throws. Needs more range but can bury the occasional three-pointer. Still has considerable upside. Hudl highlights here.

Devyne Newman, Herndon–Wing took a big jump as a junior, leading her talented Herndon team in scoring at around 15 a game. Could easily have made the first team, her season was so impressive. Scored 20 points seven times including 21 in a win over state runner-up Oakton. Has three-point shooting ability but is also dangerous with a mid-range jumper. Rebounds extremely well for her size. Hudl highlights here.

“Devyne is a gym rat. She is a hard-working kid. The first conversation we had when Devyne was an eighth grader was about how she wanted to play Division I basketball. Devyne said she would put in the work to achieve it. She likes to be challenged with our workouts and during pickup games with the coaches. Devyne is a special  talent and has a great sense humor.”

Kate Klimkiewicz, Paul VI–Could also easily be on the first team along with her Panther teammates. 5’11” wing hit 50 three-pointers on the year, including five in a win versus Carroll. Willing rebounder who understands her role on the team and how to play the game. Gave a verbal commitment to play at Boston College.

Tia Benvenuti, South Lakes–Scored ten points a game for a Seahawks team that had a lot of depth. Very quick small guard who is capable of playing lock-down defense and producing steal after steal. Capable of scoring more if her team needs it. Showed what she can do in a first-round loss to T.C. Williams, where she had 19 points. Has a lot of potential upside.

Courtlynne Caskin, The Potomac School–Poured in almost 20 a game for The Potomac School. Gets to the line as well as any guard, getting there an impressive 173 times on the season. Hit 71 threes on the year to boot. Good athlete who seems to have an endless motor. Goal next year with a stronger Panther squad is to increase efficiency.

“Courtlynne is a relentless competitor who is a threat to score from beyond the arc or get to the rim whenever she wants to.”

Natalie Terwilliger, West Potomac–Center controlled the middle for a solid West Potomac squad which advanced to the second round of regionals. Delivered double-doubles on a fairly consistent basis. Like other talented juniors on this list really just needs to develop more consistency. Has an outside shot but needs to work on getting to the line more often and sinking free throws. Importance to the team can’t be overstated–scored a season-high 22 points in her team’s opening round regional victory over McLean but only two the next night in a 16-point loss to Patriot. Hudl highlights here.

Chloe Madgwick, Stone Bridge–Wing can fill it up, averaging around 15 points a game for Stone Bridge. Like a bunch of her teammates loves to shoot threes, hitting 39 on the year. Will shoot a good foot behind the three-point line–and make it. Opponents account for her long-range shot first, but Madgwick still manages to get to the line to the tune of 6-7 attempts a game. Hudl highlights here.

Lexi Weger, Episcopal–Lengthy forward a few inches over six feet tall who plays with finesse. Hit 53 threes on the year and led the Maroon in scoring at around 16 a game. Scored a season-high 27 points in a win over Stone Ridge. Flashes a killer instinct occasionally that if she displayed a little more would make her unstoppable. Needs to get to the line more and focus on doing the dirty work inside to take her game to the next level. Hudl highlights here.