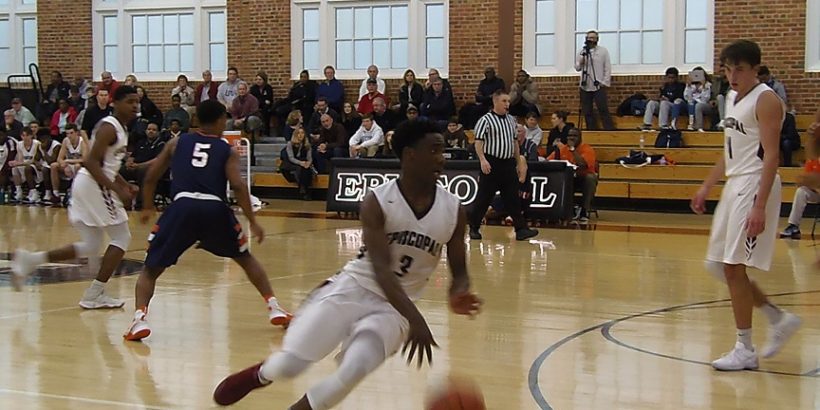 Dom Fragala, John Champe--Not too much more to say about this guy. Made 273 free throws this season, a Virginia High School League record. Averaged 37 points a game and at times, like we mean almost all of the time, was un-guardable. A very good shooter, Fragala is probably best at just keeping defenders off balance by varying his pace of dribble. That’s what gets him to the line as well. Game plan against him all you like–staying in front of him is an entirely different matter.

Matt Lewis, O’Connell–James Madison University got a steal in Lewis, easily one of the area’s best shooters. Thing is a lot of guys can shoot, but guards with Lewis’ height who can also defend are a rare commodity. Lewis averaged a couple of threes per game in leading a talented Knights team in scoring at around 16 points a game. He also got to the free throw line a decent amount despite O’Connell’s bigs taking up a lot of room in the lane.

George Mawanda-Kalema, Episcopal–Lightning quick doesn’t even begin to describe Mawanda-Kalema, a tall guard who is a very nice player to have in a league with a shot clock. Led Episcopal in scoring at just under 20 points a game. He’s one of the most DI-ready college players in the area who shouldn’t be phased in the least bit by the speed of the college game in his first year at Brown. Can defend well, and is dangerous attacking the basket and from mid-range and the arc.

Langston Gaither, Hayfield–Averaged almost 24 points a game, leading the Hawks to a regular season Liberty crown. Strong player who can score inside and out and pound the boards. Scored 30 points or more six times on the year. A little inconsistent from outside but still hit 34 threes on the year and has very good lift on his jumper and a ton of range. Perhaps most importantly incredibly clutch down the stretch, providing the Hawks game-tying and game-winning shots by the bushel.

Nana Opoku, Potomac–The big man’s skill set was on full display at last weekend’s NOVA Challenge, where he won the dunk contest and was named the Prince William team’s MVP against Fairfax. We all know about the 6’8″ center’s athleticism and ability to protect the rim, but did you know the man can shoot? He nailed at least three three-pointers Sunday. Sure that was an exhibition, but there’s no doubt Opoku could really excel at the collegiate level in a few years with his various talents. Will attend Mount St. Mary’s.

Denmark Slay, St. Stephen’s & St. Agnes–Led a deep Saints team at scoring at almost 14 a game. Combo guard who is capable of running the point and presumably will do so next year at High Point. We feel like coach Scott Cherry got a steal in Slay, a willing defender and worker who is willing to defer to the team before anything.

Aaron Thompson, Paul VI–Nothing to see here, just another DI Panthers commit. Thompson will attend Pittsburgh next year and should fit in there like a glove. A tough kid who can rack up the steals and harass the opposition’s guards constantly, Thompson is the first player in PVI history to record 800 points, 400 assists, 300 rebounds and 200 steals in his career.

Johnny Corish, Madison–Corish averaged around 15 points a game en route to leading the Warhawks to their first regional title in the program’s history. A fearless guard who can shoot, Corish can also attack the rim with extreme athleticism using floaters and even dunks. Will attend Indiana University next year and after watching him run Madison’s offense, would be fine with him replacing Tom Crean should the Hoosiers fail to lure Steve Alford or someone else.

Anthony Pearson, Osbourn–Pearson had a solid supporting cast at Osbourn with guys like Zach Powell, but not many put his team on his back and willed them to victory like Pearson often did this year. A tough kid, Pearson functioned as a power forward when necessary while also scoring like a shooting guard. He averaged around 20 points a game, but stepped up his game in the clutch against good competition. Had 26 in a win over Freedom and 31 in a win over Hylton. Averaged a jaw-dropping 31.3 points a game in three late season wins over Battlefield.

Dwayne Hill, Hylton–An athletic 6’5″ kid who just went about his impressive business quietly for 6A State runner-up Hylton. Averaged almost 17 points a game doing most of his work inside, but was also capable of delivering a clutch three-pointer for his team when necessary, such as in the third quarter of the title game against Woodson. Love this kid willing to work within the confines of his offense, but when he put the Bulldogs on his back, such as when he scored 31 against Western Branch in the state semis–wow.

Jason Aigner, W.T. Woodson–As talented as his supporting cast was, you could make the case nobody was as valuable to his team as Aigner. Remarkably consistent when others were not, Aigner led the Cavaliers in scoring at around 15 points a game. He’s known as a shooter first as he buried 71 threes on the year. We’ll remember him simply as a winner who did what a take to deliver victories for the Cavs when it mattered most. Averaged almost 18 a game this year in the postseason, well above his regular season stats. Can’t wait to follow him and Herndon’s dynamic Liam Harrington at Christopher Newport.

Khalil Williams-Diggins, West Potomac–A scorer and a facilitator, Williams-Diggins ran the Wolverines offense and averaged 15.5 points a game in doing so. Thrilled the home crowd frequently throwing alley-oops to his athletic teammates. Although a good shooter who hit 48 threes on the year, Williams was at his best attacking the rim and getting to the line with his explosive quick moves.

James West IV, Freedom-South Riding–You could argue West belongs as high as first team on this list. This year he scored 20 a game for Freedom. Another good shooter, West hit 60 threes on the year and had range well beyond the high school arc. Also a dynamic passer, West sometimes would lull opponents to sleep on the perimeter and then attack the rim with considerable leaping ability. Will play with Opoku at Mt. St. Mary’s next year.

Nate Watson, O’Connell–The big guy headed to Providence next year racked up double-doubles for the Knights game after game. O’Connell’s second-leading scorer perhaps only because defenses usually focused on stopping Watson first. Tall at 6’9″ and strong, Watson was perhaps the most dominant pure low post player in the area.

Brian Sweeney, Potomac Falls–There are stationary shooters and then there are shooters who can hit while on the move. Well, Sweeney can hit standing still too, but it was his three-point shooting on the move that really frustrated his defenders. We watched him hit four threes in the first quarter against Tuscarora and totally deflate that team in a late-season game. Sweeney ran the point and averaged 16 a game for Potomac Falls as the Panthers dominated their conference. We would be remiss if we didn’t mention the dynamic David Walls here, who could easily have made this list as well.

Corey Pelham, Lake Braddock–You could argue Pelham higher on this list as well and to be honest we wouldn’t fight you. The Patriot District player of the year over amazing talents like Aigner and Williams-Diggins, the sensational Pelham averaged 23 a game in Lake Braddock’s new up-tempo system. Pelham was more of a nightmare to guard in the new system because teams couldn’t face-guard him as easily like they did before. Deadly shooter scored in double figures every game except the first, a contest that had only 72 total points against Centreville. Worst scoring game after the Bruins went up-tempo was 17 points in the season-ender against Herndon.

Jamal Washington, Potomac–Often over-shadowed by Opoku, which is a shame because Washington is really good. Averaged 13 a game for the Panthers, who won their third straight 5A North regional title. Good size and strength for a guard. Will hit about one three-pointer a game but does most of his offensive damage in transition and attacking the rim. Hits more than three-quarters of his free throws when he gets to the line. Was 9-9 from the charity stripe in a season-high 31 against Freedom-Woodbridge.

Zach Garrett, Heritage–Often over-looked because of the Pride’s methodical tempo and strong senior teammates, Garrett really had as impressive season as almost anybody. A strong, tall forward, Garrett can fill it up from inside and out, but his overall game is what impressed. He can defend at multiple positions, do the dirty work and rebound very well. Led a Heritage team in scoring that won 20 games. Oh, also can play the point despite being well over six feet tall, and did. Pretty well, too.

Marcus Cherry, South Lakes–Even with Marcus Cherry the Seahawks were inconsistent. Without him they might have been the most up and down team around. The Seahawks have great young talent with guys like Cam Savage and Emmanuel Aghayere, but Cherry was about a consistent a scorer as there was around the region. Cherry scored in double figures in all but one of his games. An athletic swingman with decent height, he averaged almost 19 points a game. Great mid-range pull-up. Showed his stuff against powerful VISAA state champ Trinity Episcopal with a 21-point, 14-rebound performance.