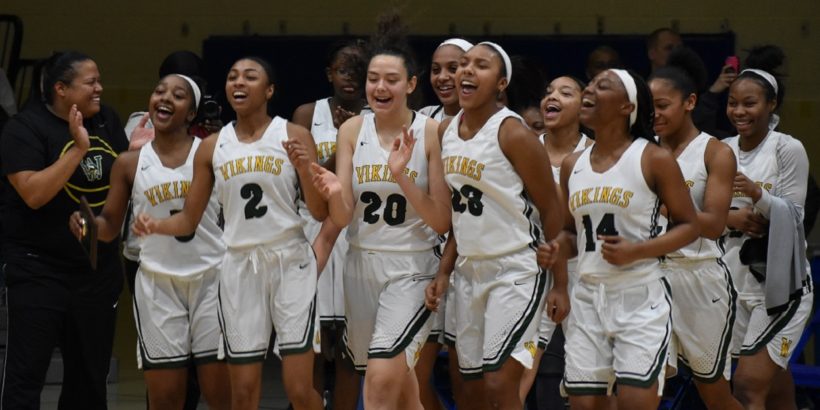 Down 32-19 to T.C. Williams midway through the third quarter Saturday, nobody was really counting the explosive and talented Woodbridge Vikings out. But nobody really expected them to do what they did, either.

The Vikings embarked on a 24-2 run, forcing turnovers and frustrating the Titans with their relentless tenacity en route to a 47-41 victory and a 6C Regional Championship. We’ve grown used to runs of that type from Tamika Dudley’s team, but to do it in such a big game against such a talented team as T.C. Williams was nothing short of amazing.

“It just feels so good to know that your hard work is paying off,” Coach Dudley said after the game. “From the beginning of the game I told them it’s going to be a dogfight, it’s not going to be easy. It’s a game of runs so you have to weather the storm, and that’s what they did. They kept fighting, kept fighting, chipped away and we came up with the result we wanted.”

This certainly was a game of runs. Woodbridge went up 10-2 early, with senior center Jasmine Forte receiving passes down low and executing three nice finishes. T.C. Williams then embarked on an 18-3 run behind junior guard Trinity Palacio, virtually unstoppable early. Palacio used her quickness to get to the rim, drain mid-range jumpers, and get to the line. She had 10 of her team’s total 20 points at half as the Titans led 20-15.

The Titans kept rolling early in the third quarter. Palacio was still doing damage and with 4:24 left in the quarter, Halle Walker found a cutting Sasha Bates for an and-one lay-up. It was 30-19 and the Vikings needed a time out.

T.C. Williams (22-5) scored once more to make it 32-19. Then the bottom fell out as the Vikings unleashed their fury. A scramble-type defense caused turnover after turnover as the Vikings used their defense to trigger their offense. Senior guard Paris McBride led the way, forcing steals and energizing the Woodbridge fans by diving after loose balls and creating havoc. With fast break after fast break triggered by forcing turnovers, the Vikings were also getting to the line and causing foul trouble for T.C. Titans forward Danielle Levenberry picked up her fourth foul by the end of the third quarter, with the Vikings now only down one.

The quarter break offered no respite for the Titans. Junior guard Tae’lor Willard followed an Alia Denwiddie miss to give the Vikings their first lead since the first quarter at 35-34. T.C. couldn’t get shots up in many cases, and the ones they did seemed rushed and panicked. Danielle Levenberry fouled out. A short time later it was 43-34 Woodbridge and the amazing 24-2 second half run was complete. T.C. Williams recovered to play better after that, but it was too late.

Willard led the way on offense for Woodbridge (23-4), tallying 14 points and eight boards. McBride and Forte added 10 points apiece, while sophomore guard/forward Aaliyah Pitts had nine. Defense won this day for the Vikings, however. In addition to the defensive pressure created mainly by McBride and the guards, the tall frontcourt of Woodbridge did a good job limiting T.C.’s talented posts, Danielle and Elise Levenberry. They only managed six points combined, well below their average.

Palacio finished with 17 points for T.C., but expended a ton of energy late just shielding the ball from Woodbridge’s frantic defenders. The Titans sill advance the next week’s regional tournament, where they will open against 6D Regional Champion Marshall.

Woodbridge, meanwhile, gets a rematch with the Langley Saxons in the first round of states. The Vikings fell to Langley last year in the regional tournament.