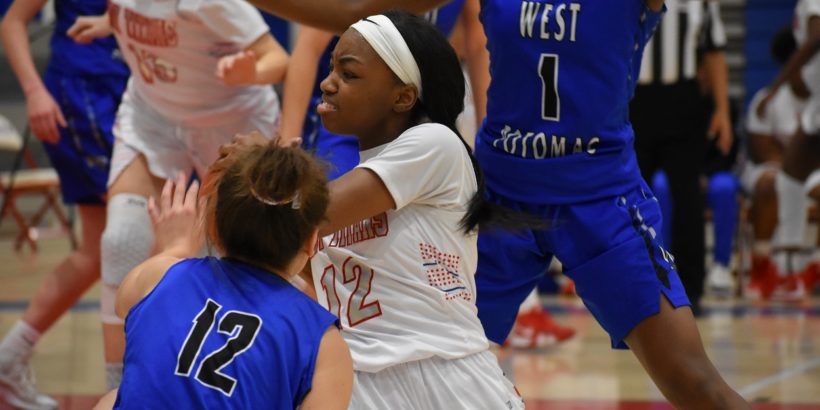 After holding T.C. Williams to 13 first half points, it looked like the West Potomac girls had a pretty good chance to upset the Titans Friday night in the Gunston District Championship. Then, coach Lisa Willis’ Titans upped the intensity in the second half.

“When they got sick of playing how they were playing, they decided to turn it up,” Willis said.

The result was an eventual 46-33 home victory for her team and a fourth straight district title for the Titans girls.

It was a battle the whole way for the Titans, who again went undefeated in the Gunston regular season. West Potomac came out in a triangle and two defense to limit the outstanding T.C. backcourt of seniors Sasha Bates and Trinity Palacio. It worked, with Palacio scoring four points and Bates none in the first half. T.C. Williams shot 3-28 from the field before halftime as a team.

The West Potomac approach was an intelligent one, but the Titans had seen junk defenses before. They came out and scored 19 points in the third quarter with Palacio starting to find open teammates and Bates using her defense to spark the team’s transition offense. After three quarters the Titans lead had grown to double-digits.

Still West Potomac (13-11) didn’t quit. They pounded the glass all night, with freshman forward Samantha Uhrin hauling down 20 rebounds and giving the Wolverines second chances on offense all night. A 6-0 run by the Wolverines to open the fourth quarter cut the Titans lead to 32-27 with just over six minutes remaining.

Then the Titans again rose to the challenge. They scored a few times and forced turnovers with their full court press. Soon the lead was again double-digits, and the battle-tested Titans were celebrating.

T.C. Williams (17-4) made a night that started ugly into one to remember. Willis, the Gunston Coach of the Year in her first season at the school, was happy afterward but well aware her team has more work to do in next week’s regional tournament. Her team is one of the favorites in that tournament, so we asked her what her team has to do to win it.

“I feel like we get consistently out-rebounded,” said Willis, whose team was out-rebounded 47-33 on the evening. “We have to rebound–not even rebound, just box out.”