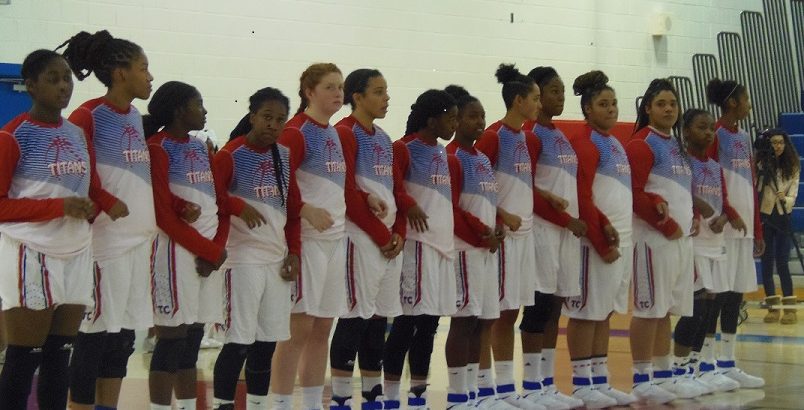 Many suspected the T.C. Williams ladies might be a contender this year. After all, Kesha Walton’s team returned all its starters from last year’s 17-win squad, including freshman sensation Trinity Palacio. The Titans also welcomed talented post players and twins Danielle and Elise Levenberry into the fold, transfers from Hylton. But there were doubts. Were the Titans, 55-43 losers to Fairfax in regionals last year, really ready to step up and challenge the “big boys” of the Northern Region?

Looks like the answer to that question is most definitely “yes.”

The Titans ran wild over perennial regional power Edison Tuesday night, defeating the Eagles 65-42 at home in Alexandria. While Edison lost a lot from last year’s powerhouse that made it to states, the young Eagles figure to still have a strong team this year. T.C. Williams didn’t seem to care much about that, getting strong play not just from a few Titans but many. Walton and T.C. had used eight players halfway through the first quarter and 11 in the first half.

“[Our depth] allows us to press the whole game, to cause 32 minutes of havoc,” Coach Walton said. “There’s always fresh legs for me to say, ‘let’s go’.”

The Titans defense was outstanding. Talented Eagle Carole Miller was only 2-13 from the field, constantly harassed by multiple defenders. Edison rarely got open looks even from the perimeter as the Eagles went 0-14 from three-point range and shot 20% from the field. The Titans cleaned up the boards as well, out-rebounding the Eagles 47-22 by our count. Elise Levenberry was particularly dominant on the glass, pulling down 14 rebounds alone.

As was commonplace last year, T.C. was led in scoring by Palacio, now a sophomore. She scored 20 points, driving to the basket as well as nailing threes. She was helped out everywhere, though, with the Titans bench matching her scoring output and fellow sophomore Sasha Bates also contributing double figures.

Despite passing the first test, there’s still ample room for improvement from Walton’s team. The Titans committed 11 fouls to Edison’s one in the first quarter alone, putting the Eagles on the line early and often. The game stayed closer than it should have because of that and the Eagles got 22 of their 42 points from the charity stripe. “We need to work on our discipline a little bit,” Walton said. “A little disappointed to get in the double bonus in the first quarter.”

It’s scary to think what the Titans might become if they can find that discipline. They were a dangerous opponent last year, and now with the Levenberrys (13 points, 19 rebounds combined) the Titans don’t have to rely as much on outside shooting. “They make us that much better because I know if we’re having a poor-shooting night I have them down low to rebound and put-back,” Walton said. “I call them the beasts of the east of the west–one left, one right.”

Her squad might have been contenders even without the new additions. Now? There’s absolutely no doubt.