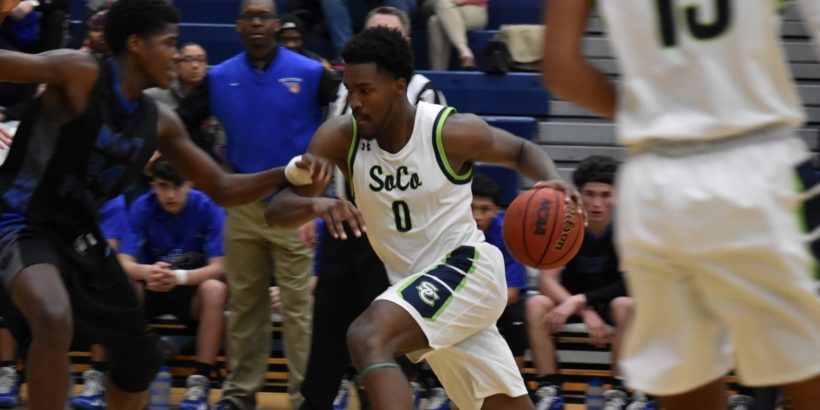 Senior William Wilson led the Stallions with 15 points, scoring 10 of them in the second half.
Share List

Senior William Wilson scored 15 points to lead four Stallions in double figures as host South County ended West Potomac’s season for the second year in a row, 56-47 in the quarterfinals of the Occoquan Regional Tournament.

West Potomac succeeded early at drawing South County into an uneven game with limited Stallions possessions. Up 16-14, South County’s quick-strike attack got going in the second quarter, closing the half on a 7-2 run. The Stallions started the second half in the manner they ended the first. SoCo junior Andre Speight buried a three to open things up, leading to a 7-0 run and a 30-16 Stallions lead. West Potomac called a time out, but never really recovered.

The Stallions defense gave West Potomac fits, especially early. South County held West Potomac to 31.8% shooting in the first half, and its athletic guards made life hard for the Wolverines’ starters at the one through three. West Potomac starting seniors Ethan Payne, Bradley Harden, and Jack Fricka only managed six total points on 3-20 shooting on the evening.

Meanwhile, South County (22-4) showed discipline in its shot selection. The Stallions shot 50% from the field on the night and took only a few bad shots. During one impressive sequence in the fourth quarter with West Potomac now only trailing single digits, South County chewed almost a minute of clock before Wilson found Trenton Picott open for a dunk.

South County, which won a state title in 2017-2018 but fell to rival Lake Braddock in the state semis last year, moved one step closer to its goal of making the state tournament.

“We just need to make sure we play hard every game,” said Wilson when asked what SoCo needs to do to win it all again. “We can’t take any days off because everybody is coming for us, giving us their best game. The key tonight was boxing out, no second-chance points and shutting down their main shooters.”

The Stallions advance to face Hayfield in the Occoquan 6C semi-finals. For West Potomac (18-7), senior forward Adrien Hunter impressed on offense from inside and out, finishing with 21 points.