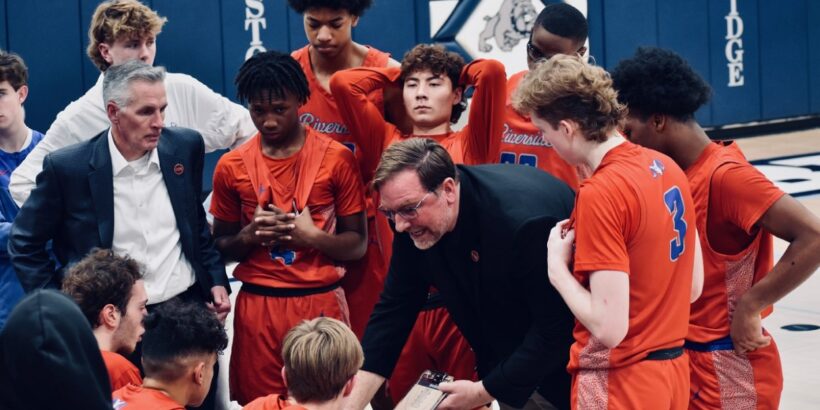 Coach Koscinski talks to the Rams during a time out Friday night. The Rams won a huge road game over Stone Bridge to take the lead in the Potomac District.
Share List

In a battle for first place in the Potomac District, the Riverside Rams held a double-digit lead for most of the game, but found themselves only leading 38-35 heading into the fourth quarter.

Stone Bridge’s resilience and late success from the three-point line helped erase a 14-point lead that the Rams held halfway through the third quarter. But Riverside head coach Michael Koscinski encouraged his team to keep their cool through the adversity.

“As we got to the fourth quarter we reminded them ‘hey, take a deep breath,” Coach Koscinski said. “This is fun, this is where you want to be. We were trying to be calm and take some of the emotion out of it and just execute. We told them – this is what we gotta do, they’re going to throw some stuff at you, and we were able to weather it.”

Frazier praised the Riverside student section and spoke about how nice it feels to see your friends and classmates support.

“It feels great seeing them out there,” Frazier said. “We really appreciate their support. It really helps when we’re in rival territory.”

Stone Bridge (2-1, 10-4) was led by junior guard Jackson Mazur who had 13 points, three rebounds and one steal.

The Rams got off to an early 7-2 lead courtesy of Frazier assisting Schaefer on two layups and also sinking a three-pointer. The Bulldogs were forced to call a timeout so they could slow the game down and regroup.

Stone Bridge responded with a three-pointer out of the timeout, but Riverside ended the quarter on a 10-2 run as they limited the Bulldog’s three-point shooters.

“We tried to take out their shooters as much as possible,” Frazier said. “We plugged the lanes for their drivers because they have a lot of great athletes.”

The Rams continued to control the second quarter as they fed Schaefer in the post, or forced their way to the free throw line. They entered the half leading the Bulldogs 25-15.

“We wanted to punch the ball inside and take care of our advantage there,” Coach Koscinski said. “Not everybody has a 6’7″ guy. We also wanted to work inside-out, we’ve been trying to do that the last few games. If we take care of the ball and get quality looks that’s huge.”

Stone Bridge began the third quarter on a 7-3 run, scoring all of their baskets off second-chance points. The Rams responded with an 8-0 run, thanks to a pair of threes from sophomore guard Shane Crissman.

The Bulldogs took a timeout with four minutes remaining in the quarter, and proceeded to respond with a 13-2 run to end the quarter. But Riverside knocked down two three-pointers early in the fourth to regain the momentum.

“I think we’ve shot it pretty well this year and it covers some of the mistakes,” Coach Koscinski said. “We’re able to spread the floor with our shooters.”

Still, the Bulldogs kept the game alive with their three-point shooting, but Riverside was able to clinch the win as the Rams converted four of their final six free-throws.

Coach Koscinski was happy to see his team deliver on their gameplan, but also knows they can improve down the stretch.

“We need to close out games a little better.” Coach Koscinski said. “We’re young, but we learn and we’re very coachable.”