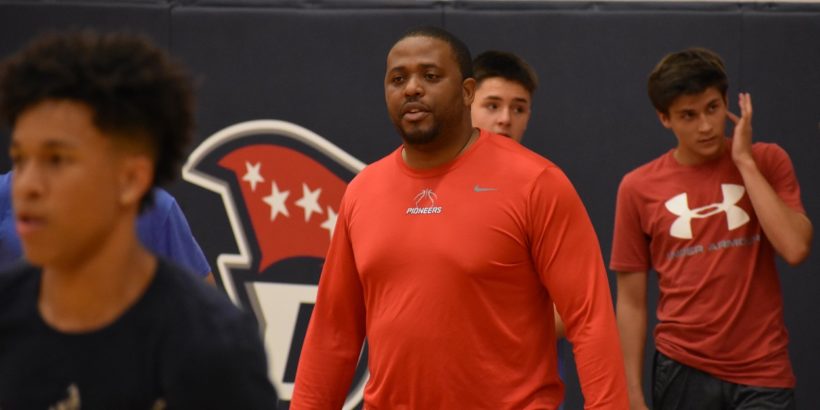 Sherman Rivers is clearly a good coach. An eternal student of the game and former standout basketball player at Potomac High School and William and Mary, Rivers could be coaching at the collegiate level. Really, he probably could be doing just about anything he wants in basketball or otherwise.

But he wants to be at Patriot. That makes Pioneer basketball better. Heck, it makes NOVA basketball in general better.

This upcoming season will be Rivers’ fourth at the Nokesville school, which opened in 2011. In just three seasons Rivers has won 49 games, including 23 and a regional title last year. While the program just graduated the most successful basketball class in school history, the prognosis remains positive at Patriot.

That’s because it is easy to see what Rivers is building. At a recent basketball workout well north of 30 kids showed up. The talent varied, the amount of basketball skill varied, but it was plain to see the enthusiasm kids had to be a part of the program. There’s impressive program depth at Patriot now.

Rivers’ evolution into a high school coach is a story worth telling. In 2010 the guard decided he was done playing overseas after seven years. He suspected he wanted to coach basketball, so he came back to the area to work at his high school alma mater, Potomac, under the great Keith Honore.

At that point Rivers thought he might want to eventually coach college basketball. He got some job offers, including at William and Mary, but ended up Recruiting Coordinator at Mount Olive University in North Carolina. The hours and travelling were tough away from his family, but that’s not what spurred a move back to the area.

“I just found I had more of an effect shaping kids at a high school level than at a college level,” Rivers told us. “I had more of a connection with the kids and enjoyed the process of helping to shape them into young men.”

So Rivers came back to Honore’s staff at Potomac, where he helped coach two Panther state championship teams. Then it was only a matter of time before he desired to chance to guide his own program.

“I’ll be honest, I like to be in charge,” a smiling Rivers said.

He mused other opportunities but was attracted to the Patriot job when it came open. The Pioneers hadn’t had much basketball success up to that point, but Rivers saw potential.

“When I was coaching at Potomac we played Patriot,” Rivers said. “I actually was really impressed with their JV and ninth grade teams and saw a lot of potential there. I saw guys like Devon [Parrish] on the JV and guys like Hagen [Vandiver] on the ninth grade team and really saw something there.”

That speaks to Rivers’ basketball eye, because not everyone around the region saw that talent coming. That includes us here at Novahoops. It didn’t happen overnight, but under Rivers’ leadership that talent eventually produced a 23-3 record in 2018-2019.

The Pioneers likely won’t be as good this year but they’ll be good, if not right away, eventually. Rivers’ squad has defense, athleticism, shooting, height, ball-handling–everything needed for gradual success. It’s all there. The only thing Patriot lacks right now is a lot of on-court experience.

The Pioneers will get that, and they’ll benefit from learning from one of the best basketball staffs in the region. Rivers knows his craft, though he’s quick to credit his assistants for the program’s rise. From day one Rivers has surrounded himself with quanity plus quality on the bench to help him.

One such quality assistant is Rivers’ own father. The elder Mr. Rivers, a retired Lieutenant Colonel, was the JV coach at Potomac when Rivers played there. He provides a wealth of knowledge his son can draw upon, not just about basketball.

“I’ve obviously learned a lot from him,” Rivers said. “Especially about leadership.”

It seems appropriate he has actual family at Patriot, a place where he is quickly solidifying a basketball family. Maybe at some point Rivers will desire a new challenge in the basketball world and leave the school, perhaps again taking a stab at coaching in college. Or as has happened with so many quality coaches, the necessity of taking care of family first will lead him in another direction.

Frankly we hope not. Patriot seems a perfect fit for the talented Rivers. College basketball’s loss is NOVA basketball’s gain.