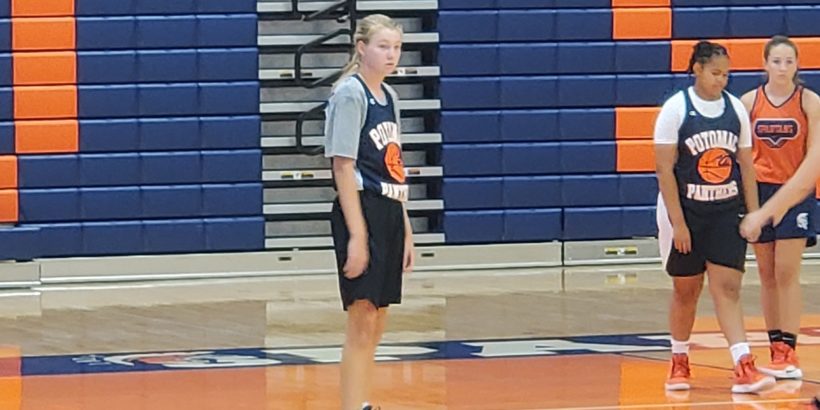 Potomac School's Kayla Rolph was tough to stop last weekend. She brings a ton of height, skill, and athleticism to the table for a sophomore.
Share List

Coaching positions are now filled at T.C. Williams and Woodbridge, two programs that shined in the playoffs last season. Darius Wilson, the founder of Higher Level AAU, is now in charge of the Vikings. Shawn Wright is now the head coach at T.C. Williams. Wright has a lot of girls basketball coaching experience at notable places like Boo Williams and Riverdale Baptist. (Editor’s Note: Wright reversed course due to a career change, the T.C. Williams position is now open again)

Fall League is also underway around the area. While the games don’t count, the rosters aren’t complete and there’s some rust, one can get a taste of what is to come by watching. We saw games at Robinson and West Springfield last weekend and got several takeaways:

–Sara Park is gone for Potomac School, but the Panthers looked good in their first fall league game–a win over West Springfield. Sophomore Kayla Rolph is tall and athletic and can run the court. She had at least 20 points against the Spartans and looked good even with West Springfield’s defense well aware of her after the first half. She and Evelina Swigart are a good base for coach Mike Hutton to build on in the post-Park years to come.

–Lake Braddock and coach Liz Reed scored a great addition with Falls Church transfer Amari Faust. Faust, one of the more underrated guards in the region, can create her own shot and brings some juice to a team that sometimes struggled to score points last year. She and Lake Braddock looked good in a double-digit win over a Chantilly team that should be very good as well. The Chargers almost look like a college team when they take the court with all their height.

–Colgan could be the favorite in the Cardinal District now, especially with Aaliyah Pitts of Woodbridge gone to the WCAC. Alyssa Andrews is still virtually unstoppable, and a solid freshman class from last year has clearly gotten stronger and improved. The Sharks lose two good ones in Jordan and Naya Smith but return everyone else. They lost by just a couple of baskets to a powerful Edison team that had most if not all of its weapons present.

–And man, does Edison have a lot of weapons. In the win over Colgan the Eagles got really solid offensive performances from junior Celeste Castma (22 points) and senior Kaitlyn Lee (21 points). Watch Lee below with the textbook cross-over and opposite hand finish. Carole Miller is obviously a huge loss but the Eagles only lost three seniors total. They may be a more well-rounded team this year on offense, perhaps more difficult to defend. Congrats to Charlotte Jewell (Brown) and Bri Johns (SE Missouri St.) on their recent commitments to play at the next level.

–Congrats also to Elizabeth Dufrane on her commitment to the mighty Dragons of Drexel. She didn’t even look winded in putting up something absurd like 70 points in wins over TJ and Centreville. The Highlanders have solid talent elsewhere that will look to step up this year as opponents key on Dufrane and make her work for every point she gets.

–Madison and South Lakes was a marquee matchup. Most players were present–except notably the Seahawks’ Brianna Scott–in a game the Warhawks pulled away to win by double-digits. Both teams lost in the state quarters last year but are threats to go even further this year. Madison can be scary good and many, many girls on its roster can shoot. Their ball movement is excellent with the Makrigiorgos sisters penetrating and dishing and the Warhawks’ defense is always good. With more of an inside game this year the best most Madison opponents can do is just pray the Warhawks are cold from the arc.

South Lakes impressed without Scott. Leila Copeland was one of our favorite players last year and we all know what she can do. Keep an eye on senior Nina Boffman, too, shown here getting the “and-one” off a pass from Copeland.

The Seahawks lose only two seniors from last year’s roster.