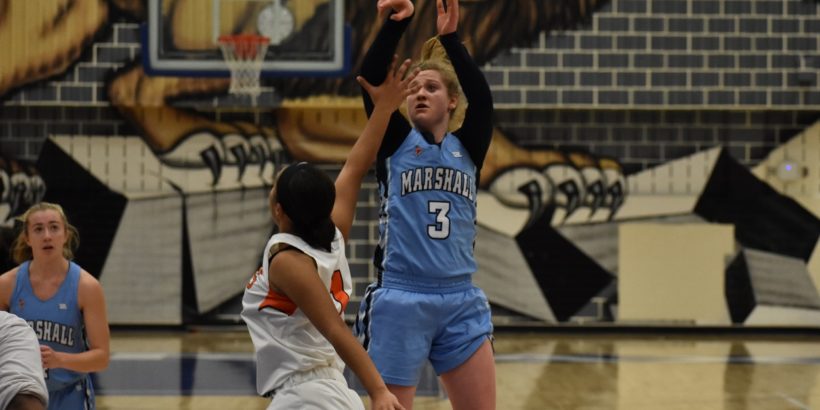 Down 28-15 at half, Marshall stormed back to take the lead in the third quarter and ultimately defeat the Hawks.

The Statesmen (6-2) looked like a different team in the second half. Perhaps still adjusting to starting guard Mary Trivisonno’s absence (foot injury), Marshall could not get a rhythm on offense and were torched by Hayfield (5-3) sophomore guard Kendall Dunham. Dunham had 16 at halftime, more than Marshall’s entire team.

But then Marshall got hot. Junior guard Christina Trivisonno, who led the team with 18 points, got into the lane and started to make plays. Senior guard Zoe Soule (10 points) played tough defense at the point of attack and delivered crisp passes. Junior post Valerie Dirkse (11 points) made some key shots as well.

“We started to move the ball on offense and defended like crazy,” Marshall coach mike Trivisonno said.

O’Connell got to the rim early and often and led 36-18 at halftime, even extending the lead to 20 points early in the third quarter. Chantilly started to play better and draw fouls, cutting the O’Connell lead to seven points late before the Knights put it away with some clutch play late.

Leading by double digits through sizable chunk of the second and third quarters, Langley (5-3) found its lead shrunk to 31-24 after three quarters. The Saxons’ defense then clamped down, holding Flint Hill to just four fourth quarter points en route to the victory.

Langley, known for its defense, got some nice offensive contributions as well before taking the air out of the ball late. Sophomore guard Taylor Maguire hit several key shots to pace Langley with 15 points. Senior center Marya Mufti had 11 points and was a strong presence patrolling the lane and on the boards.

Down 20-8 early in the second and 31-22 at halftime, the host Rebels charged back to get an impressive comeback victory.

Pat Deegan’s young team, which features seven freshman and was missing standout senior guard Sam McNaughton, used defense to turn the tide against the Bobcats. Fairfax closed to 39-35 after three quarters and then held Battlefield scoreless for the first six minutes of the final quarter, taking the lead on an and-one by senior Melanie George with just over two minutes left.

The Rebels (4-2) were paced by George’s 16 points, as well as 17 from freshman guard Molly Brunk. Brunk received a pass late from fellow freshman Kaylin Prestosh to put the Rebels up three and provide the final margin of victory.

“Young legs,” Deegan said when asked what how his team elevated its game in the second half. “Melanie George did a great job scoring for us as well.”

Senior guard Kat Jenks had 17 in the loss for Battlefield (4-5).