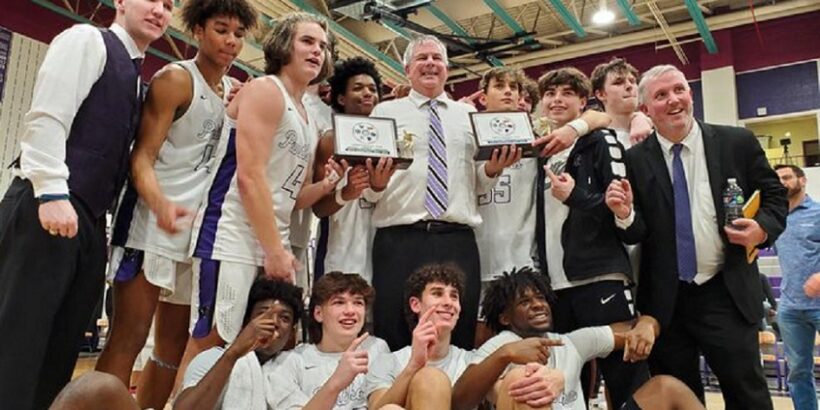 Most people thought Potomac Falls was the third or fourth most likely team to win the district around Christmas. (Photo by Bill Bride @DMVSportsShots)
Share List

There’s a fine art to coaching a high school basketball team so that it will peak at the right time – the postseason. And with 35 years’ experience, Potomac Falls’ Jeff Hawes has found the right formula.

A team seeking direction during the winter break, the Panthers have long since found their game. They needed all of it Friday night at home to top Stone Bridge in a grinder for the Potomac District boys basketball title, 46-45.

Third-seeded Stone Bridge had a chance to tie the game with eight seconds left but missed the front-end of a one-and-one opportunity. It also gained possession with four seconds to play, down one, but missed a three-point try from the corner at the buzzer.

Both teams advance to Wednesday’s first round of the Region 5D tournament. Potomac Falls (19-5) will host the third-seeded team from Fredericksburg and the Bulldogs (16-6) will play a team to be determined.

“We’ve won a lot of championships here, and this one is right up there,” Hawes said. “If there had been a coaches’ poll taken around January 1, we probably would have been picked fourth or fifth.”

“But the team came together. We had a meeting in the weight room and everyone talked. There were tears, but in the end, we learned that by putting team ahead of self, we’ll be okay.”

Ables said of Friday’s win, “[Stone Bridge] tried to speed us up and we tried to slow it down. We stayed true to our game. This was the biggest win, we just had to get it tonight.”

Stone Bridge coach Kent Kling said of Ables, “He goes downhill very well. As for us, we ran our sets all night, but the game was such a defensive struggle. Both teams close out well, keep both hands up and play great fundamental defense. [Potomac Falls] did a great job on the offensive glass.”

“What a great drive by [Ables],” said Potomac Falls forward Elijah Adegbenro, who missed much of the fourth quarter, watching from the bench after cramping late in the third period. “Before he hit that, I was so stressed out.”

Adegbenro said his team’s late-season losses against Stone Bridge and Independence gave it the focus it needed to be ready for the postseason as the top seed. It played Friday without key contributor James Delaney, who hurt his hip after a tough spill in Wednesday’s semifinal win over Riverside.

The teams split two games in the regular season and Potomac Falls’ defensive plan Friday was to contain guards Jacob Thomas and Dylan Hundertmark (who averaged 18.5 points in the teams’ two prior meetings), and limit Sam Whitehead (two points on Friday).

Thomas played a pivotal role in the fourth quarter, scoring eight of his 12 overall points. Hundertmark finished with 10 points. The Bulldogs entered averaging 63 points per game. “It might have been our lowest point total this season,” Kling said.

Adegbenro said the plan was to put our guards on [Thomas and Hundertmark] “and let our bigs help out if they got past them on the drive.”

Drives to the basket were pretty much the only way teams could score on Friday. Only four field goals were made Friday night from outside of the paint (two three-pointers by the Panthers, one three by the Bulldogs, and a 12-foot bucket by the Panthers.)

Potomac Falls managed a 26-21 halftime lead, but the third quarter belonged to Stone Bridge. The Bulldogs outscored them 13-5 in the third, and Thomas’ basket early in the fourth quarter gave his team its biggest lead of the night, 36-31.

Ables’ driving three-point play tied the game at 36-36. He finished with 10 points. He was one of nine Panthers who scored, just like they talked about that night in the weight room.