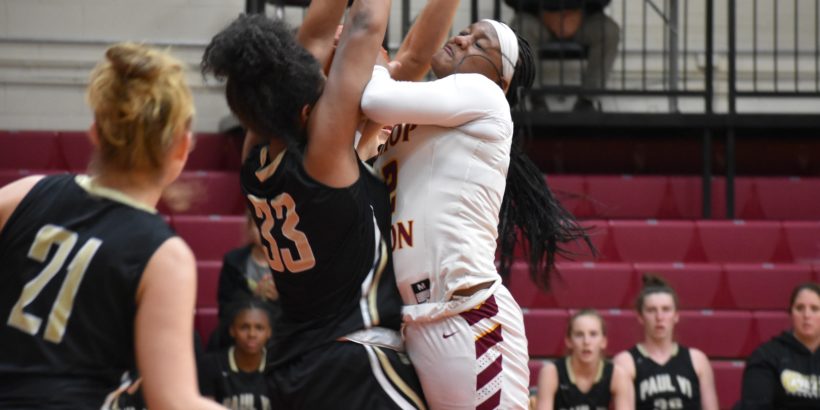 The Bishop Ireton girls haven’t defeated Paul VI in years, but after a quarter Thursday night it looked like they had a good chance. The Cardinals led 13-9, fueled by a loud home crowd pumped to see Ireton pull off the upset.

It wasn’t to be. After giving up 13 points in the first quarter, Paul VI gave up only 10 points the next two quarters combined. Meanwhile, the Panthers’ balanced offensive attack flourished as Scott Allen’s team scored 28 points in those two quarters, building a double-digit lead and ultimately winning, 54-34.

“A lot of people talk about getting away from being selfish on offense,” Allen said. “When we’re not in our culture defensively and we’re selfish, going for too many steals, that opens up driving lanes for people. Once we clogged that up tonight and started communicating well, I thought we did a really good job of staying in front of them and making them score over us. And the other part was, we rebounded.”

The Panthers (9-2, 18-3) managed to hold Ireton to 27% shooting on the evening. After Cardinals sophomore star Kennedy Clifton hit two three-pointers in the first quarter, Allen’s team didn’t allow her to hit another one. In fact, Paul VI didn’t allow Bishop Ireton to hit a three-pointer in the second half.

That made it hard for the Cardinals to keep up with Paul VI’s balanced attack. Sophomore forward Jaelyn Talley impressed with her drives to the basket–she led the way with 14 points. Junior guard-forward Lee Volker (12 points) hurt the Cardinals both in the post and the perimeter while senior guard Faith Alston (11 points) got to the line eight times in the second half. Junior guard Bella Perkins delivered a pair of three-pointers late as the shot clock ran down, effectively sealing the deal.

It was a physical, hard-fought victory. Players on both sides sustained a number of minor injuries that resulted in a stoppage of play and that player missing time. That’s pretty typical in the WCAC this time of year and Allen’s team, which has been a little beat up lately, is used to it.

“It’s late January and people are going to have injuries and get banged up, it has got to be the next person up who has to be ready to play,” he said.

Bishop Ireton (4-6, 9-11) was led by Clifton’s ten points on the evening, while fellow sophomore Olivia Brooks had seven points and eight boards.