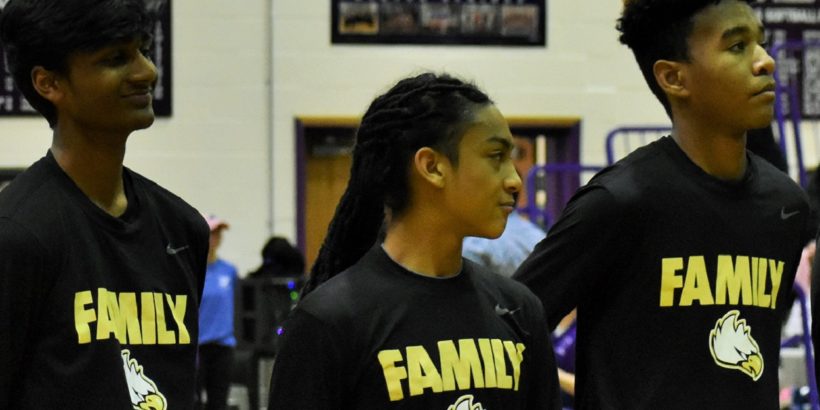 Elijah Easter (center) and the Freedom family is now back in first place in the district after a regular season sweep of Potomac Falls.
Share List

Easter led the Eagles with 19 points and three assists while shooting 60 percent and sinking five of his six attempts from the free throw line.

“Elijah was great, it was his birthday,” Freedom Head Coach Justin Powers said with a smile. “He knows he can get by the defender in front of him; he handled their pressure well and his defense was solid too. I thought he had a great game all around.”

Freedom took control of the game early, when sophomore guard Robbie Kemmerer stole the ball from Landon Hawes and broke away for an uncontested layup. The Eagles got Potomac Falls out of rhythm as they doubled Hawes, and forced the Panthers to take difficult shots. This pressure helped the Eagles build an 8-0 lead to start the game.

“The strategy was to make sure that all of their shots were difficult,” Coach Powers said. “We wanted to make sure Landon was taking tough shots; he’s the focal point. We applied a lot of ball pressure and made everything difficult. Pot Falls is a good team that runs a lot of sets, and they have a lot of action. The biggest thing was trying to make all of their actions difficult. I wish we would have done a better job on offensive rebounds, but I thought our half-court defense was pretty solid.”

The Panthers finally got on the scoreboard when senior guard Jack Groscup grabbed a rebound and immediately went to the basket. Groscup’s lay-in would start a 5-0 run for the Panthers, but the momentum was stopped when Kemmerer drained a three-pointer assisted from junior guard Jalen Harrison.

The two teams traded baskets for the remainder of the quarter, and the Eagles would maintain a 20-14 lead heading into the second quarter. Potomac Falls Head Coach Jeff Hawes encouraged his team during the intermission, “This is February baby,” he told them as he reminded them to focus on their fundamentals.

Freedom elected to take a time out with 5:13 left in the first half. “We’re fine, we’re good – let’s turn up the temp,” Coach Hawes told his team during the timeout.

Potomac Falls would then go on a 9-2 run following the timeout, that would eventually tie the game at 29 with 1:40 remaining in the second quarter. However, junior forward Anish Kalyan took over for the Eagles as he accounted for their final seven points of the half. Freedom led the Panthers 36-31 at halftime.

Late in the third quarter, Coach Hawes’ team began applying additional pressure, including a full-court press in an attempt to cut the Eagles lead. They were able to create multiple turnovers and turn them into offense, but the Eagles would still maintain a 49-41 lead heading into the fourth quarter.

Coker sent the crowd to its feet as he dribbled around a defender and slammed a dunk to start the fourth quarter. The Panthers were eventually able to cut the Eagles lead to 57-53 with less than three minutes left in the fourth quarter.

Despite the Panthers’ rally, Freedom was able to close the game as it held Potomac Falls scoreless in the final two minutes of the game.

Coach Powers was proud of his team’s win, but he acknowledged that they still have a tough road to maintain first place in the district.

“Because of some unfortunate losses we have to win the rest of our games to be in first place,” Coach Powers said.

He also commended his team for their effort, but he hopes to see his squad consistently play at this level heading into the post-season.

“Sometimes we take quarters off,” Coach Powers said. “We said to the team in the locker-room ‘we always seem to play really hard against Potomac Falls.’ We have to play that hard and focused against everybody. I think we’ve had an up-and-down season because we lack focus in some games; we’ll play great for three quarters and then have a dud – I think for us moving forward we have to have more consistency as a team.”