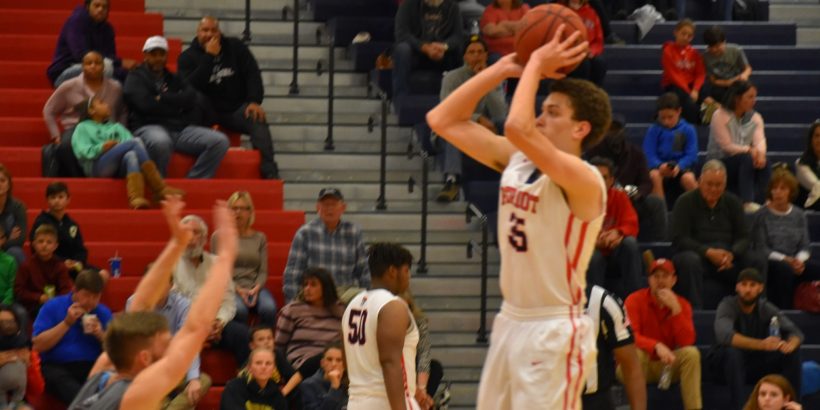 Drake Marshall prepares to drain the jumper over the Stone Bridge defense. Marshall had 25 second half points.
Share List

Senior forward Drake Marshall poured in 31 points, 25 in the second half, to spark the #17 Patriot Pioneers to a 72-62 home victory over #10 Stone Bridge Tuesday night. It was the season-opener for both teams.

“Drake can really fill it up,” Patriot coach Sherman Rivers said after the game. “When he gets it going, wow. A lot of the shots he takes I’ve got to just close my eyes and let it happen because he makes a lot of them. I really like seeing him play like this because he needs to get the recognition he deserves. He’s a great player.”

No argument here. After being content to mostly defer to teammates in the first half, Marshall demanded the ball after intermission. Stone Bridge held a five-point lead at the break and maintained that lead halfway through the third quarter, then Marshall sparked an 8-0 run to give his team the lead 43-40. When Stone Bridge battled back to tie the game at 47 he converted four straight free throws to give his team the lead for good.

Marshall hurt the Bulldogs inside and out, burying three-pointers while also taking the ball to the hole and drawing fouls. He was 11-12 from the line. That would prove to be a major factor in the game, as Stone Bridge experienced a wide foul disparity on the evening. Bulldogs guard Ben Kling led his team in scoring with 17 points, but had to go to the bench early in the second half with four fouls. Patriot converting 15 more free throws than Stone Bridge was the difference in the game.

It wasn’t all Marshall for Patriot (1-0). Senior guard Jay Villani kept things close in the first half and finished with 15 points. That was important, because Stone Bridge (0-1) looked great in the second quarter moving the ball around and finding open three-point shooters. Point guard Evan Buckley had a nice all-around game for the Bulldogs, scoring 15 and grabbing seven rebounds to go along with six assists.

Buckley valiantly led a charge late in the fourth after his team went down double digits, hitting a baseline jumper with under three minutes left to close the Patriot lead to 64-60. His team could get no closer, however. The Patriot defense did a better job limiting the Bulldogs from the perimeter in the second half, and Buckley did not have his full compliment of weapons to dish to late. Marshall’s scoring spree was too much to overcome.

“It was a heckuva way to open up,” Rivers said. “Stone Bridge has a really good point guard, they got a lot of good shooters…their coach does a really great job over there. It was a really good test to open up with them and to be able to come out and play like we did…I’m pretty happy right now.”

(all stats are unofficial)