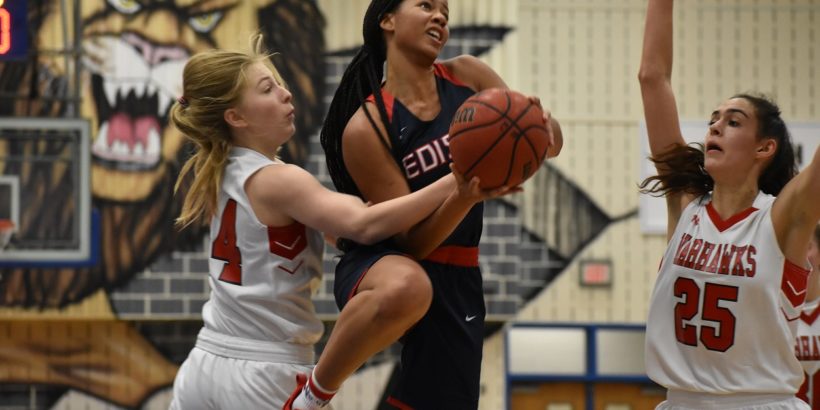 University of Virginia signee Carole Miller (18 points) takes it up strong during her team's 66-43 win over Madison.
Share List

Marshall and Edison play each other a lot. And I think it’s awesome.

Friday night at Rebel Round Ball #4 Edison defeated #8 Madison 66-43 and #14 Marshall defeated Fairfax 52-27 as both teams advanced to the tourney final. Last year the two National District foes also met in the Rebel Round Ball Final, a contest Edison won. That was one of four meetings between the two region powers, which the teams split.

They might see each other four times again this year. The Eagles have already defeated Marshall once this season and it may be difficult for the Statesmen to return the favor. Marshall lost amazing center Clara Ford to graduation and while they are talented this year, the Statesmen are young with only one senior. Edison is absurdly deep with the additions of Aurea Gingras (Paul VI) and Ebony Bordley (Mount Vernon) and without Ford it’s even more difficult for Marshall to stop athletic Edison senior Carole Miller.

“Oh no, Edison,” Marshall coach Mike Trivisonno joked after the game when I asked what he was thinking about. No question beating Edison will be difficult.

They can do it, however. But the best thing for those of us that follow basketball around here is this is shaping up to be a great rivalry for years to come. Edison is powerful year in and year out and although Miller will be gone next year the Eagles return Gingras and talented teammates like Charlotte Jewell, Bri Johns, and Kaitlyn Lee who seem to have been around forever. As mentioned Marshall only graduates one and figures to be even better next year. The coaches’ daughters, Mary and Christina, are only sophomores.

Not much more to say. Frankly it’s hard not to love the possibility of having these teams play four times a season. Can we do that every year?

The two teams meet at 7:30 pm this evening at Fairfax High School.

EDISON 66, MADISON 43
Miller scored 18, while Jewell added 15 and Johns 14 for the Eagles (8-1). Freshman sensation Alayna Arnolie and sophomore Amalia Makrigiorgos each had eight for Madison (9-4).

MARSHALL 52, FAIRFAX 27
Christina Trivisonno had 21 for the Statesmen (9-2) as they limited Fairfax (4-5) to just eight first half points. Coach Trivisonno said it was the “most complete game” his team had played this season. Sam McNaughton had 18 for the host Rebels, who meet Madison in the third place game this afternoon.